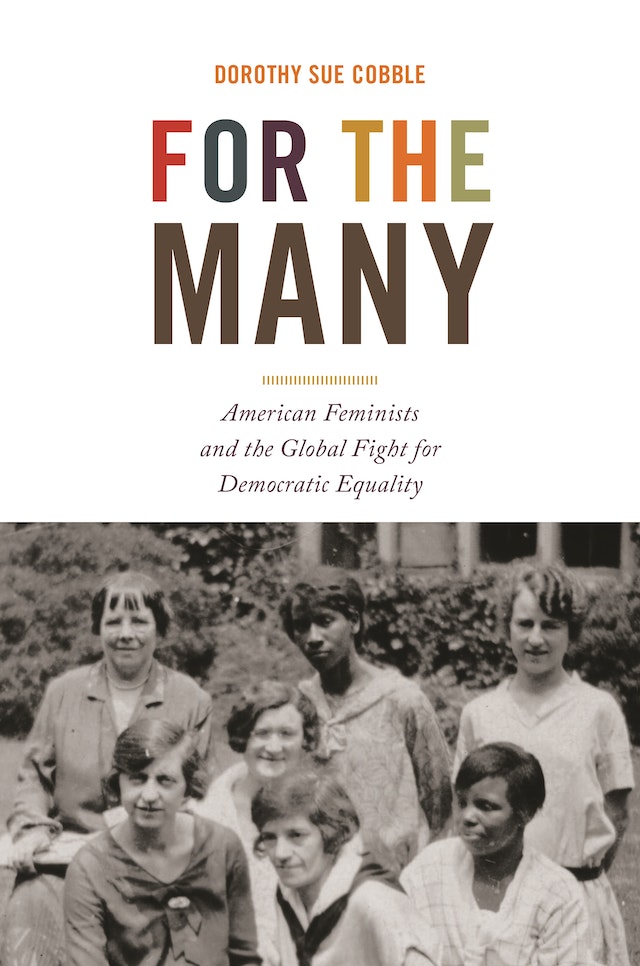 To celebrate the publication of Dorothy Sue Cobble’s new book For the Many, join us for a conversation about the history and future of the global fight for women’s rights and economic justice.

Deborah Gray White is the author of Ar’n’t I A Woman? Female Slaves in the Plantation South; Too Heavy a Load: Black Women in Defense of Themselves, 1894-1994; and Lost in the USA: American Identity from the Promise Keepers to the Million Mom March. She currently co-directs the Rutgers Scarlet and Black Project which investigates Native Americans and African Americans in the history of Rutgers University.

Nancy Hewitt has written widely on U.S. women’s activism across race, region and time periods. Her recent publications include “Feminist Frequencies: Regenerating the Wave Metaphor” (Feminist Studies); Radical Friend: Amy Kirby Post and Her Activist Worlds; and a second edition of A Companion to American Women’s History with Anne Valk.

Yevette Richards Jordan is a specialist in African-American History, US Women’s History, and Pan-Africanism. She is the author of Maida Springer, Pan-Africanist and International Labor and the oral history companion book entitled, Conversations with Maida Springer: A Personal History of Labor, Race, and International Relations. Her current book project analyzes racial violence in Northern Louisiana through the framework of multigenerational and closely connected Black and white family networks.

Joanne Meyerowitz’s most recent book is A War on Global Poverty: The Lost Promise of Redistribution and the Rise of Microcredit (Princeton University Press, 2021). She is a former editor of the Journal of American History and a past president of the Organization of American Historians.

Ruth Milkman is a sociologist of labor and labor movements. Her most recent books are Immigrant Labor and the New Precariat (2020) and On Labor, Gender and Inequality (2016).

Jocelyn Olcott is the author of Revolutionary Women in Postrevolutionary Mexico (Duke UP, 2005) and International Women’s Year: The Greatest Consciousness-Raising Event in History (OUP, 2017) and co-editor of Sex in Revolution: Gender, Politics, and Power in Modern Mexico (Duke UP, 2006). She is currently working on two projects: a biography of activist Concha Michel and an interdisciplinary, international collaboration, “Revaluing Care in the Global Economy.”

Joan Sangster has published on women, work and the labour movement; feminism and socialism; law and criminalization; and Indigenous women. Her recent books, One Hundred Years of Struggle: The History of Women and the Vote in Canada (2018) and Demanding Equality: One Hundred Years of Canadian Feminism (2021) appear with UBC Press.

Susan Zimmermann is a historian of labor and gender politics and movements in international contexts and Austria-Hungary. Since 2014 she has served as President of the International Conference of Labour and Social History ITH. She holds the European Research Council Grant “Women’s labour activism in Eastern Europe and transnationally, from the age of empires to the late 20th century” (Acronym: ZARAH, 2020–2025).

Dorothy Sue Cobble specializes in the study of twentieth-century politics and social movements. Her most recent books are Feminism Unfinished: A Short, Surprising History of American Women’s Movements and For the Many: American Feminists and the Global Fight for Democratic Equality.

For the Many tells the stirring story of the twentieth-century feminists who fought for the full rights of women, workers, and the poor, both in the United States and abroad. Cobble reclaims social democracy as a central thread of US feminism and shows how global forces, peoples, and ideas shaped American politics. For the Many follows US women’s transnational activism from the explosion of democracy movements before World War I to the making of the New Deal and the mid-century struggles for decolonization and global economic justice to the reassertion of conservatism and the revival of female-led movements today.

This event is hosted by the Center for Women and Work, School of Management and Labor Relations, Rutgers University, and Princeton University Press.