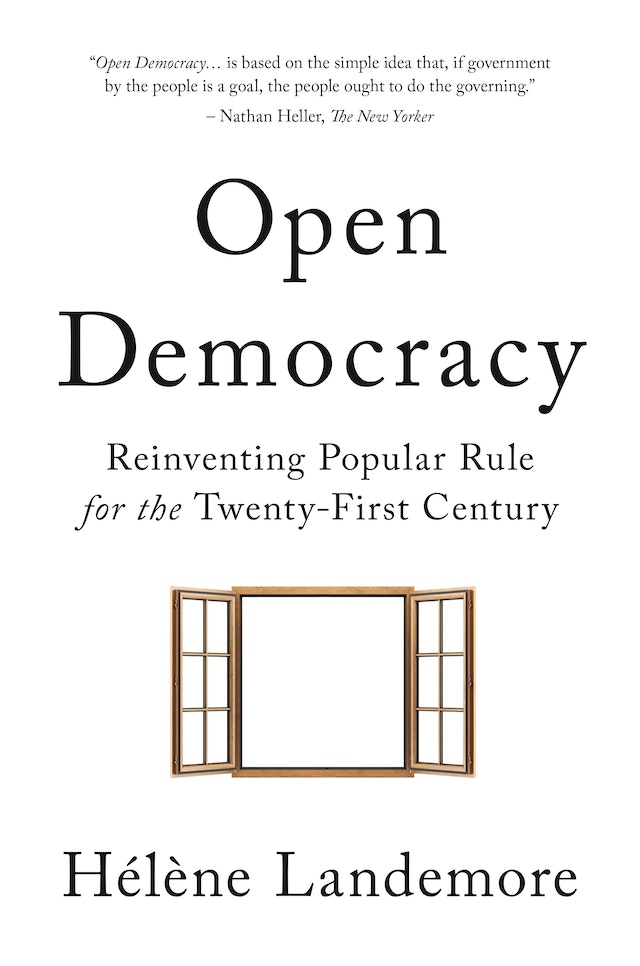 In this conversation, leading political theorist Hélène Landemore will discuss the crisis of democracy, the challenge of authoritarian and meritocratic regimes like China or Singapore, the need to reform the dated political institutions of so-called representative democracy, and Landemore’s new model of an “open democracy” centered around randomly selected legislative bodies. What would an authentic democracy, in which power is open to all equally, look like? Are ordinary citizens really capable of making the law? Can there be representation, legitimacy, or even accountability without elections? She will also discuss concrete examples—primarily in Iceland and France—of democratic innovations pointing towards visions of more fully realized democracies.

Hélène Landemore is Associate Professor of Political Science at Yale University. Her first book in English Democratic Reason: Politics, Collective Intelligence, and the Rule of the Many provided a knowledge-based (or “epistemic”) justification of democracy’s value. With the forthcoming publication of Open Democracy: Reinventing Popular Rule for the Twenty-First Century in October, she is half-way through a tetralogy on democracy. In this book she defends a new institutional translation of the idea of democracy, in which power is equally accessible to all citizens. Future projects include a volume on democratic foundations and democracy at work.  helenelandemore.com  /  @landemore

Vafa Ghazavi is a DPhil candidate and John Monash Scholar at Balliol College and Lecturer in Politics at Pembroke College, University of Oxford. His research interests include theories of justice, moral agency, and the nature of moral progress. @GhazaviVD

Hélène Landemore favors the ideal of “representing and being represented in turn” over direct-democracy approaches. Supporting a fresh nonelectoral understanding of democratic representation, Landemore recommends centering political institutions around the “open mini-public”—a large, jury-like body of randomly selected citizens gathered to define laws and policies for the polity, in connection with the larger public. She also defends five institutional principles as the foundations of an open democracy: participatory rights, deliberation, the majoritarian principle, democratic representation, and transparency.

Open Democracy demonstrates that placing ordinary citizens, rather than elites, at the heart of democratic power is not only the true meaning of a government of, by, and for the people, but also feasible and, today more than ever, urgently needed.

Hélène Landemore is associate professor of political science at Yale University. She is the author of Democratic Reason (Princeton) and Hume. Twitter @landemore