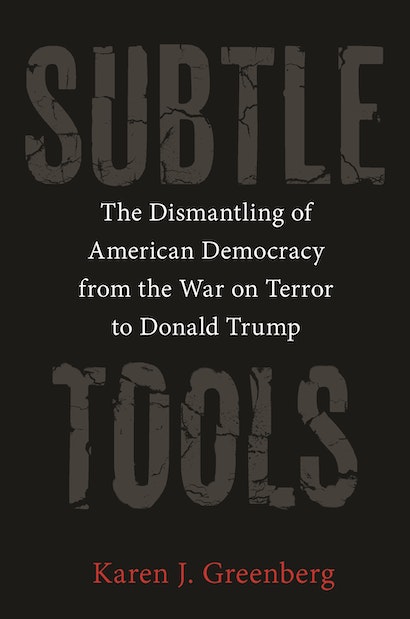 Book talk for Karen J. Greenberg’s, “Subtle Tools: The Dismantling of American Democracy from the War on Terror to Donald Trump.”

Has America’s sprawling national security state become a major corrosive force, undermining democracy at home in the name of securing America from threats abroad? Does the security state undermine the rule of law, and if so, what can be done about it?

Join us on Wednesday, November 10, from 12:00 to 1:00 PM ET as we discuss the new book by Karen J. Greenberg, Subtle Tools: The Dismantling of American Democracy from the War on Terror to Donald Trump. We will consider the deeper consequences of the war on terror and spotlight an increasingly undemocratic America in which disinformation, xenophobia, and disdain for the law have become the new norm, and where the subtle tools of national security threaten democracy itself.

Thanassis Cambanis is an author, journalist, and director of Century International. His work focuses on U.S. foreign policy, Arab politics, and social movements in the Middle East. He is currently working on a book about the impact of the 2003 Iraq invasion on the international system. He has written books about Egypt’s 2011 uprising and Hezbollah in Lebanon, and has edited four volumes about politics and security in the Arab world. He regularly contributes to Foreign Affairs, The New York Times, World Policy Review, and other publications. He is an adjunct professor at Columbia University’s School of International and Public Affairs.

Brian Finucane joined Crisis Group in June 2021 as senior adviser for the U.S. Program. He focuses on developing policies and institutional checks to decrease U.S. reliance on military tools in foreign affairs, including through legislative reforms of war powers and counterterrorism authorities. Prior to joining Crisis Group, he worked for a decade in the Office of the Legal Adviser at the U.S. Department of State where he advised the U.S. government on legal and policy issues relating to counterterrorism, the use of military force, and partnered military operations. Brian holds a BA in anthropology from Cornell University, a DPhil from Oxford University, and a JD from Yale University.

Karen J. Greenberg is the director of the Center on National Security at Fordham Law and an international studies fellow at New America. Greenberg specializes in the intersection between national security policy, the rule of law and human rights. Greenberg is the host of Vital Interests Podcast, and the editor-in-chief of three on-line publications: The CNS/Soufan Group Morning Brief (2007–present), the CNS/Aon Cyber Brief (2011–present), and Vital Interests Forum (2019–present). She has written and edited numerous books including: Subtle Tools: The Dismantling of American Democracy from the War on Terror to Donald Trump (Princeton, August 2021), Rogue Justice: The Making of the Security State (Crown, 2016), The Least Worst Place: Guantanamo’s First 100 Days (Oxford, 2009), and more. Her work has been featured in the New York Times, the Washington Post, the Los Angeles Times, the Nation, the Atlantic, and many other major news outlets. She is a frequent guest on national television and radio shows.