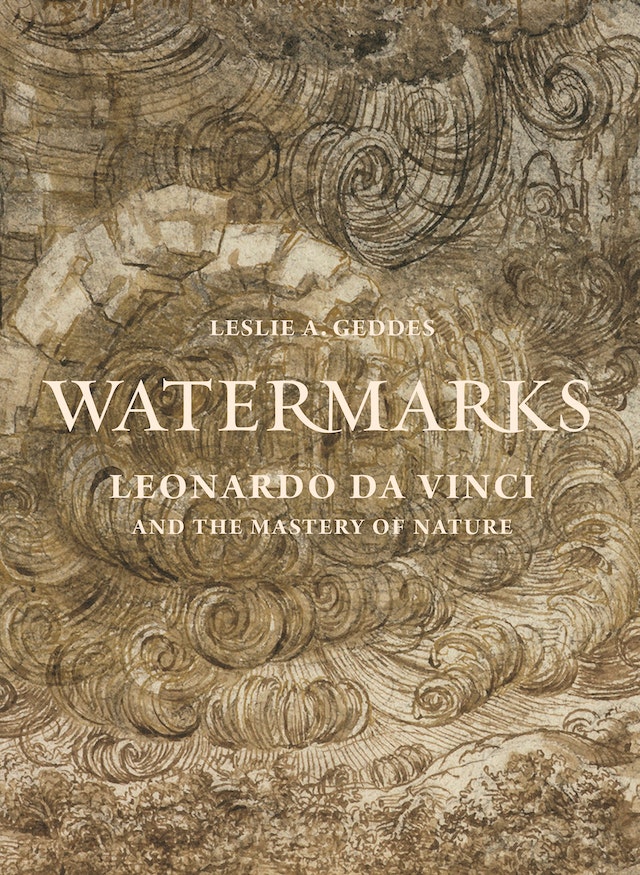 Watermarks
Available in Hardcover
Buy This

From drawings for mobile bridges and underwater breathing apparatuses to plans for water management schemes, Leonardo evinced a deep interest in the technical aspects of water. His visual studies of the ways in which landscape is shaped by water demonstrated both his artistic mastery and probing scientific mind. Analyzing Leonardo’s notebooks, plans, maps, and paintings, Geddes argues that, for Leonardo and fellow artists, drawing was a form of visual thinking and problem solving essential to understanding and controlling water and other parts of the natural world. She also examines the material importance in this work of water-based media, namely ink, watercolor, and oil paint.

A compelling account of Renaissance art and engineering, Watermarks shows, above all else, how Leonardo applied his pictorial genius to water in order to render the natural world in all its richness and constant change.

Leslie A. Geddes is assistant professor of art history at Tulane University. She is currently the Robert Lehman Fellow at the Villa I Tatti, the Harvard University Center for Italian Renaissance Studies in Florence. She received her B.A. from Columbia University, and holds an M.A. and a Ph.D. from Princeton University. An art historian, she researches how Renaissance artists studied and depicted the natural landscape. Her first book, Watermarks: Leonardo da Vinci and the Mastery of Nature, was published with Princeton University Press in 2020. It analyses the subject of water in art in conjunction with the practical undertakings of hydraulic engineering. Her ongoing research is concerned with early modern intersections of art and science, cartography and navigation, visualizations of knowledge, and the environmental humanities. She has upcoming residencies at The Newberry Library in Chicago, The Huntington Library in San Marino, CA, and the American Academy in Rome.