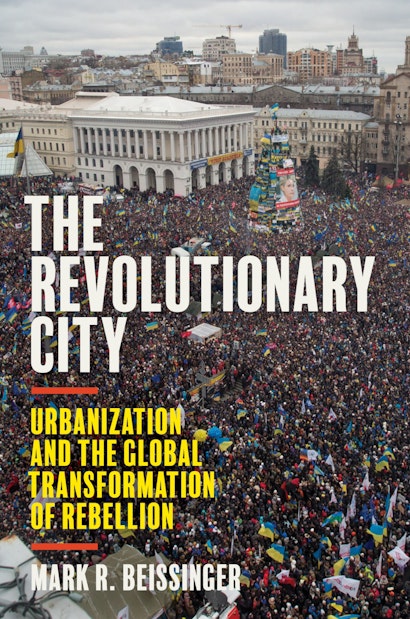 The Revolutionary City
Available in 3 editions
Buy This

Examining the changing character of revolution around the world, The Revolutionary City focuses on the impact that the concentration of people, power, and wealth in cities exercises on revolutionary processes and outcomes. Once predominantly an urban and armed affair, revolutions in the twentieth century migrated to the countryside, as revolutionaries searched for safety from government repression and discovered the peasantry as a revolutionary force. But at the end of the twentieth century, as urban centers grew, revolution returned to the city—accompanied by a new urban civic repertoire espousing the containment of predatory government and relying on visibility and the power of numbers rather than arms.

Using original data on revolutionary episodes since 1900, public opinion surveys, and engaging examples from around the world, Mark Beissinger explores the causes and consequences of the urbanization of revolution in the late twentieth and early twenty-first centuries. Beissinger examines the compact nature of urban revolutions, as well as their rampant information problems and heightened uncertainty. He investigates the struggle for control over public space, why revolutionary contention has grown more pacified over time, and how revolutions involving the rapid assembly of hundreds of thousands in central urban spaces lead to diverse, ad hoc coalitions that have difficulty producing substantive change.

The Revolutionary City provides a new understanding of how revolutions happen and what they might look like in the future.

Mark R. Beissinger is the Henry W. Putnam Professor of Politics at Princeton University. His books include Nationalist Mobilization and the Collapse of the Soviet State and Historical Legacies of Communism in Russia and Eastern Europe.

Commentators:
Anne Wolf is a Fellow at All Souls College, University of Oxford. She researches Authoritarian Politics, with a specific focus on the Middle East and North Africa. She is also an Associate Editor at the Journal of North African Studies and a Senior Research Fellow at the Project of Middle East Democracy. She was previously the Margaret Smith Research Fellow in Politics and International Relations at Girton College, University of Cambridge. Her current research uncovers why in democracies some people decide to mobilise for autocracy.

Stathis Kalyvas is Gladstone Professor of Government and fellow of All Souls College at Oxford. Until 2018 he was Arnold Wolfers Professor of Political Science at Yale University, where he founded and directed the Program on Order, Conflict, and Violence and co-directed the Hellenic Studies Program. In 2019 he founded and directs the T. E. Lawrence Program on Conflict and Violence at All Souls College. His main fields of interest are the dynamics of polarization and civil war, ethnic and non-ethnic violence, and the formation of cleavages and identities. He has also researched party politics and political institutions in Europe.

Neil Ketchley is Associate Professor in Politics in the Department of Politics and International Relations, the Oxford School of Global and Area Studies, and Fellow of St Antony’s College. He is a political scientist of the Arabic-speaking Middle East and North Africa working at the intersections of political sociology and comparative politics. Neil’s current research interests include episodes of mass protest in the MENA, the rise of political Islam in Egypt, and the changing profiles of regional political elites.