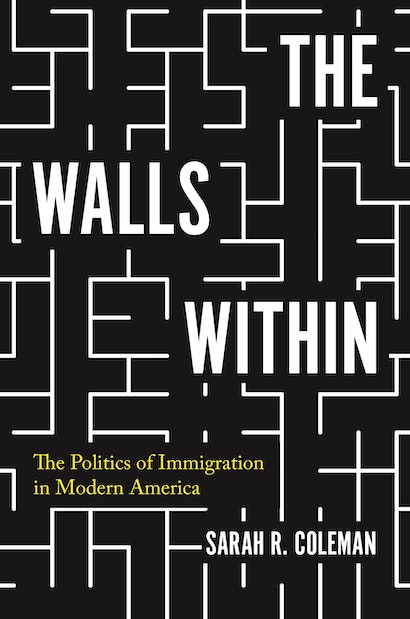 The Walls Within
Available in 2 editions
Buy This

Virtual Book Discussion with Julia Rose Kraut (Threat of Dissent: A History of Ideological Exclusion and Deportation in the United States: Harvard UP, 2020) and Sarah R. Coleman (The Walls Within: The Politics of Immigration in Modern America: Princeton UP, 2021), moderated by Julian Lim. Contact torrie.hester@slu.edu with questions.

The 1965 Hart-Celler Act transformed the American immigration system by abolishing national quotas in favor of a seemingly egalitarian approach. But subsequent demographic shifts resulted in a backlash over the social contract and the rights of citizens versus noncitizens. In The Walls Within, Sarah Coleman explores those political clashes, focusing not on attempts to stop immigration at the border, but on efforts to limit immigrants’ rights within the United States through domestic policy. Drawing on new materials from the Carter, Reagan, and Clinton administrations, and immigration and civil rights organizations, Coleman exposes how the politics of immigration control has undermined the idea of citizenship for all.

Coleman shows that immigration politics was not just about building or tearing down walls, but about employer sanctions, access to schools, welfare, and the role of local authorities in implementing policies. In the years after 1965, a rising restrictionist movement sought to marginalize immigrants in realms like public education and the labor market. Yet throughout the 1970s and 1980s, restrictionists faced countervailing forces committed to an expansive notion of immigrants’ rights. In the 1990s, with national politics gridlocked, anti-immigrant groups turned to statehouses to enact their agenda. Achieving strength at the local level, conservatives supporting immigration restriction actually acquired more influence under the Clinton presidency than even during the so-called Reagan revolution, resulting in dire consequences for millions of immigrants.

Revealing the roots behind much of today’s nativist sentiment, The Walls Within examines debates about who is entitled to the American dream, and how such dreams can be subverted for those already calling the country home.