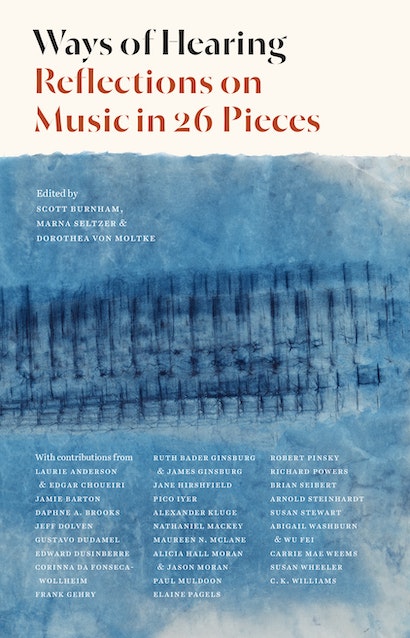 Ways of Hearing
Available in 2 editions
Buy This

Ways of Hearing: Reflections on Music in 26 Pieces is an outstanding anthology in which notable musicians, artists, scientists, thinkers, poets, and more—from Gustavo Dudamel and Carrie Mae Weems to Ruth Bader Ginsburg and Paul Muldoon—explore the influence of music on their lives and work.

Jane Hirshfield is one of American poetry’s central spokespersons for concerns of the biosphere. Her poems, essays, and translations are devoted to the heightening of awareness and attention and to the recognition of interconnection, between disciplines, cultures, eras, and beings. A former Chancellor of the Academy of American Poets, she is the author of nine collections of poetry. Other honors include fellowships from the Guggenheim and Rockefeller foundations and the National Endowment for the Arts. In 2019, she was elected into the American Academy of Arts & Sciences.

Elaine Pagels’s ability to make her renowned study of religion accessible and relevant to millions of people through her books— including National Book Award winner The Gnostic Gospels and, most recently, bestseller Why Religion?— is emblematic of her talent for tapping into our humanity. The Princeton University Professor and National Humanities Medal recipient has often spoken of music’s profound role within this collective consciousness.

Abigail Washburn is as comfortable within the field of Chinese law as she is touring the world as a Grammy Award–winning vocalist, songwriter, and clawhammer banjo player. The combination of these passions has garnered her a reputation as an unofficial musical ambassador to China with a singular talent for creating inventive cross-cultural syntheses across seemingly disparate folk traditions, including projects with collaborator Wu Fei. She is also a Ted Fellow, the first US-China Fellow at Vanderbilt University, and an Andrew W. Mellon DisTIL Fellow at UNC–Chapel Hill.

Wu Fei is one of the world’s foremost masters of the guzheng, a 21-string Chinese zither that she has transformed from a relic of ancient classicism into a genre-bending contemporary instrument. The Beijing-born, Nashville-based performer, composer, and improviser has fused Western and Chinese musical idioms into a new, cosmopolitan voice that has captivated sold-out audiences around the world. She shares her passion for building transcultural musical bridges with longtime collaborator Abigail Washburn.

Scott Burnham is Distinguished Professor of Music at the Graduate Center, City University of New York. He is also Scheide Professor of Music History Emeritus at Princeton University, where he taught from 1989 to 2016. As author, editor and translator, Burnham has addressed the music of Beethoven, Mozart, Schubert, Schumann, Haydn, and others.