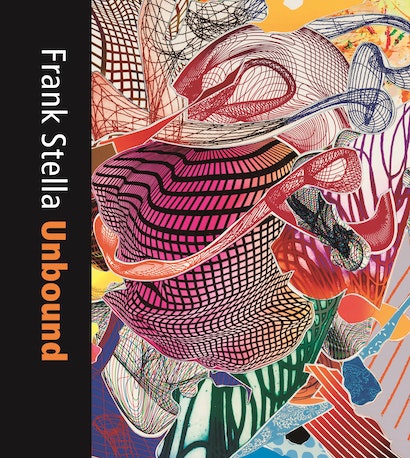 Buy This
Focusing on the vital role of literature in the development of the artistic practice of Frank Stella (b. 1936), this insightful book looks at four transformative series of prints made between 1984 and 1999. Each of these series is named after a literary work—the Had Gadya (a playful song traditionally sung at the end of the Passover Seder), Italian Folktales, compiled by Italo Calvino, Moby-Dick by Herman Melville, and The Dictionary of Imaginary Places by Alberto Manguel and Gianni Guadalupi. This investigation offers a critical new perspective on Stella: an examination of his interdisciplinary process, literary approach, and interest in the lessons of art history as crucial factors for his artistic development as a printmaker. Mitra Abbaspour, Calvin Brown, and Erica Cooke examine how Stella’s dynamic engagement with literature paralleled the artist’s experimentation with unconventional printmaking techniques and engendered new ways of representing spatial depth to unleash the narrative potential of abstract forms.
Mitra Abbaspour is curator of modern and contemporary art and Calvin Brown is associate curator of prints and drawings, both at the Princeton University Art Museum. Erica Cooke is a PhD candidate in the Department of Art and Archaeology at Princeton University.