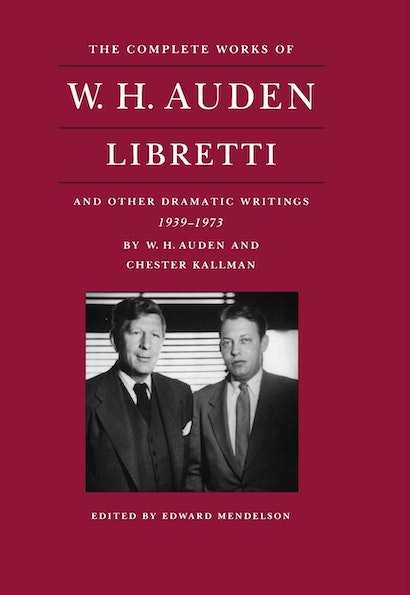 W. H. Auden called opera the “last refuge of the High Style,” and considered it the one art in which the grand manner survived the ironic levelings of modernity. He began writing libretti soon after he arrived in America in 1939 and abandoned his earlier attempts to write public, political drama. Opera gave him the opportunity to rise to the high style in public, not in an attempt to elevate his own status as a poet, but in service of the heroic voice of the singers. These works present their mythical actions with a direct intensity unlike anything in even his greatest poems. In this volume of Auden and Chester Kallman’s libretti, extensive historical and textual notes trace the history of the production and revision of the works and provide full texts of early scenarios, as well as abandoned and rewritten scenes.


Almost all the works included here were previously published in incomplete and often inaccessible editions — or were never published at all. The book prints for the first time the full text of Paul Bunyan, Auden’s first libretto, which he wrote for music by Benjamin Britten. It also includes Auden and Kallman’s The Rake’s Progress, written for Igor Stravinsky, and Delia, written for Stravinsky but never set to music. The book continues with Auden and Kallman’s two libretti written for music by Hans Werner Henze, Elegy for Young Lovers and The Bassarids, and their adaptation of Love’s Labour’s Lost, composed by Nicolas Nabokov. It also contains their translation of The Magic Flute, with its scenes reordered for greater dramatic coherence and added dialogue for sharper mythical significance, and their antimasque, The Entertainment of the Senses, for music by John Gardner.


The book contains two radio plays — The Dark Valley, a monologue written by Auden alone, and The Rocking Horse Winner, written with James Stern and based on a story by D. H. Lawrence. Also included are the unpublished masque that Auden wrote for Kallman’s twenty-second birthday, the unpublished versions of The Dutchess of Malfi that Auden prepared with Bertolt Brecht, scenarios for a film script and a libretto that were never completed, Auden’s narrative for the medieval Play of Daniel, two narratives for documentary films, and his song lyrics written for Man of La Mancha before the producer decided to use a different lyricist.

Edward Mendelson is Professor of English and Comparative Literature at Columbia University and the author of Early Auden (Viking). He is the editor of two volumes of Auden's poetry, Collected Poems (Random House) and The English Auden (Random House).

"This collection is, above all, fun to read, full as it is of memorable high jinks. . . . There is a fertility of invention not only in incident but in writing itself . . . Auden was always a virtuoso, something of a showoff—and it is a pleasure to watch him showing off."—Los Angeles Times,