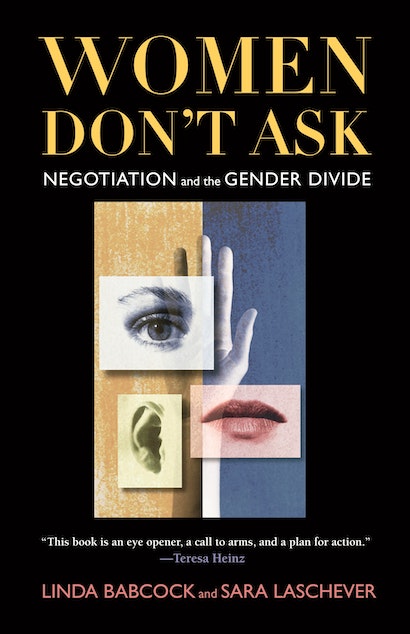 When Linda Babcock asked why so many male graduate students were teaching their own courses and most female students were assigned as assistants, her dean said: “More men ask. The women just don’t ask.” It turns out that whether they want higher salaries or more help at home, women often find it hard to ask. Sometimes they don’t know that change is possible — they don’t know that they can ask. Sometimes they fear that asking may damage a relationship. And sometimes they don’t ask because they’ve learned that society can react badly to women asserting their own needs and desires.


By looking at the barriers holding women back and the social forces constraining them, Women Don’t Ask shows women how to reframe their interactions and more accurately evaluate their opportunities. It teaches them how to ask for what they want in ways that feel comfortable and possible, taking into account the impact of asking on their relationships. And it teaches all of us how to recognize the ways in which our institutions, child-rearing practices, and unspoken assumptions perpetuate inequalities — inequalities that are not only fundamentally unfair but also inefficient and economically unsound.


With women’s progress toward full economic and social equality stalled, women’s lives becoming increasingly complex, and the structures of businesses changing, the ability to negotiate is no longer a luxury but a necessity. Drawing on research in psychology, sociology, economics, and organizational behavior as well as dozens of interviews with men and women from all walks of life, Women Don’t Ask is the first book to identify the dramatic difference between men and women in their propensity to negotiate for what they want. It tells women how to ask, and why they should.

Linda Babcock is James M. Walton Professor of Economics at Carnegie Mellon University's H. John Heinz III School of Public Policy and Management. Sara Laschever is a writer whose work has been published by the New York Times, the New York Review of Books, the Village Voice, Vogue, and other publications.

"A highly readable book. . . . Women Don't Ask should be read by anyone with a fear of negotiating, male or female, and by managers who want a better understanding of how 47 percent of the work force confronts the workplace."—Alan B. Krueger, The New York Times

"Women Don't Ask is not a straight recitation of findings—nor is it simply a "rant." It goes beyond well-known facts and offers concrete tips on how women can remedy the underlying problems and actually move ahead. The authors prescribe refreshingly specific methods of negotiation that they've seen work for even the most confrontationally-challenged women."—Allison Nazarian, ForeWord Magazine

"Neither a dry academic treatise nor a self-help book, this work puts forth a model for a society that respects women's communication strengths."—Library Journal

"This thoughtful analysis could both benefit managers across industry lines and help women learn the importance of developing negotiating skills."—Booklist

"Clear, useful, and sensibly organized. . . . Women Don't Ask crisply describes the results of one study after another, fitting the puzzle pieces together to show how and why women are held back—and hold themselves back—from advancing both financially and in every other way."—E.J. Graff, Women's Review of Books

"The first book to adequately explain the dramatic differences in how men and women negotiate and why women so often fail to ask for what they want at work (starting with equal pay). Every male manager in America should read it."—Fortune

"Women Don't Ask helps women learn how to communicate their desires. This is absolutely essential and basic information since we can't read brainwaves. Speak up or surrender your goals!"—Patricia Schroeder, President & CEO, Association of American Publishers

"Women Don't Ask does an amazing job in identifying and providing solutions to a very real issue: the challenges women face in negotiating. Linda Babcock and Sara Laschever have done a superb job not only in highlighting the problem of gender differences in negotiation but also in providing ways to begin fixing it. Example after example of the financial and emotional impacts make this issue extremely compelling. Any senior manager needs to be aware of the significant ramifications both in and out of the workplace. I highly recommend Women Don't Ask as a must read for executives—female and male."—Jim Berrien, President and Publisher, Forbes Magazine Group

"In this brilliant book Linda Babcock and Sara Laschever provide readers with the means not only of navigating the difficulties of negotiation, but also of fully engaging a modern world where traditional roles and norms are receding and business dealing has become more important. By looking at negotiation through the lens of gender, Babcock and Laschever explain why we-men and women alike—develop our skills as negotiators, and in so doing they instruct us on how to become better negotiators. By illuminating negotiation through the real-life experiences of women and men, Babcock and Laschever underscore that most important lesson in all of negotiating: that the best deal is the deal that works best for all parties."—Robert J. Shiller, author of Irrational Exuberance and The New Financial Order

"Women don't ask the important questions that will make them successful—but Babcock and Laschever do. This is an important study of how women can become their own best advocates by knowing how to ask for exactly what they want in their public and private lives. The secret is in believing that one can negotiate almost anything. Venus and Mars, bosses and tyros: this is the book you need to bring peace and happiness to every relationship."—Harriet Rubin, author of The Princessa: Machiavelli for Women

"This book is an eye opener, a call to arms, and a plan for action; it is enlightening, unsettling, and, ultimately, inspiring. Although women have made great strides in American society, the reality is that, since the 1990s, progress has slowed to almost a standstill. Gracefully and with humor, Linda Babcock and Sara Laschever tell a riveting story about an invisible problem that's been hiding in plain sight: one major reason that women still work for less money and advance less far and less fast than men is that women themselves have accepted the status quo and refrained from asking for more than they're offered and for less than they need or deserve. They make the novel—and important—point that negotiation may be one of feminism's final frontiers. Of all the books about the roadblocks our society erects in women's paths, this one may prove to be the most useful in everyday life."—Teresa Heinz

"Women Don't Ask is a compelling and fresh look at the gender-in-negotiation question. Practitioners can act on the advice in the book, and researchers will be asking new questions for decades. This book will fundamentally change how we think."—Max H. Bazerman, Harvard Business School

"The authors offer advice that is practical and likely to result in desired changes for women who want to be able to accomplish more in multiple spheres of their lives."—Kathleen L. McGinn, Harvard University