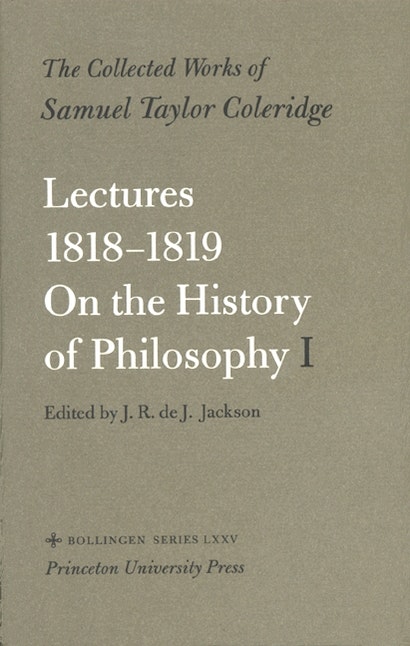 During the winter of 1818-1819, Samuel Taylor Coleridge gave fourteen lectures on the history of philosophy. A shorthand writer took down twelve of them in the most detailed version of Coleridge’s lectures known to exist. The transcriptions are imperfect and inaccurate in various ways, but, when they are combined with Coleridge’s own notes, as in this edition, the result is a coherent and largely complete whole.


The lectures contain Coleridge’s interpretation of the history of philosophy. He opposed the idea, widely accepted at the time, that the philosophy of the Enlightenment had advanced by conquering religion. He believed that this view had doomed philosophy to the low esteem in which it was held in Britain, and he wanted to counter it by showing that the philosophy of the Enlightenment was largely derivative and that neither philosophy nor religion could stand alone. This series of lectures was his most systematic attempt to survey the relationship of philosophy to religion from Thales to Kant.


The edition presents a fully annotated and indexed text of the lecture series, and it provides in addition the complete texts of the shorthand reports and of Coleridge’s own notes (which were omitted from the Coleridge Notebooks), along with newspaper and manuscript reports by people who attended the lectures. The volume includes an appendix by Owen Barfield, which is drawn from his incomplete manuscript edition of the lectures.

J.R. de J. Jackson is University Professor of English at the University of Toronto.