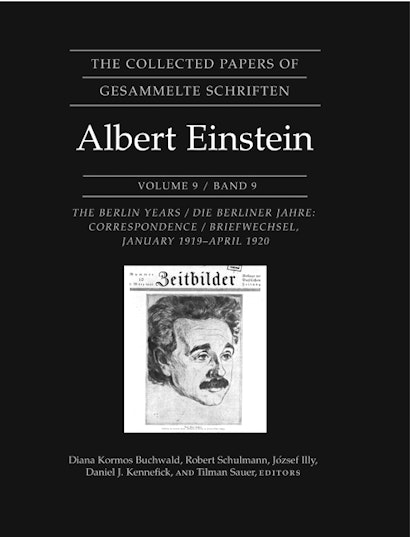 The present volume, set in the turbulent post-World War I period, finds Einstein awaiting news of the 1919 British eclipse expedition to test the general relativistic prediction of the deflection of starlight by the sun. With the expedition’s success, he becomes the first science celebrity of our age. Deeply interested in the other, stellar redshift test of his theory, Einstein supports astronomers engaged in experimental work on the issue. Piqued by early suggestions of a unified field theory, he ponders how to unify gravitation and electromagnetic field theory and also works to resolve contradictions between the new quantum physics and relativity. His open-minded exchanges with colleagues may challenge his later image as the stubborn critic of quantum mechanics.


We see Einstein deeply engaged in discussing social and political issues, participating in humanitarian efforts, and intervening on behalf of intellectuals condemned to death after the fall of the Bavarian Soviet republic. He faced anti-Semitic outbursts, reflected increasingly on his own identity as a Jew and assisted in efforts toward the establishment of the Hebrew University. As an internationalist opponent of war, and a German-speaking Swiss citizen whose renown was sealed by the Englishman Eddington’s confirmation of relativity, Einstein mitigated postwar hostility toward German scholars.


Correspondence with family and friends documents his divorce, remarriage to his cousin, and his closeness to his two sons. Notwithstanding evidence in newly uncovered material concerning efforts to lure Einstein back to Switzerland, and also to the Netherlands, Einstein, entertaining high hopes for the young Weimar Republic, remained in Berlin. This volume reveals new facets of Einstein as he constructively participated in German and European scientific, academic, and cultural life.

Diana Kormos Buchwald is Associate Professor of History at the California Institute of Technology. Robert Schulmann is a longtime editor of the Einstein Papers. József Illy, Daniel J. Kennefick, Tilman Sauer, Virginia Iris Holmes, and Ze'ev Rosenkranz are research faculty at the California Institute of Technology. A. J. Kox is Professor of the History of Science at the University of Amsterdam.

"This centenary year brings another installment of Einstein's Collected Papers, in a revealing and meticulously annotated volume that contains correspondence from January 1919 to April 1920. It covers such diverse subjects as his divorce and remarriage, the death of his mother, his love if the Brothers Karamazov, and a violin."—PD Smith, The Guardian