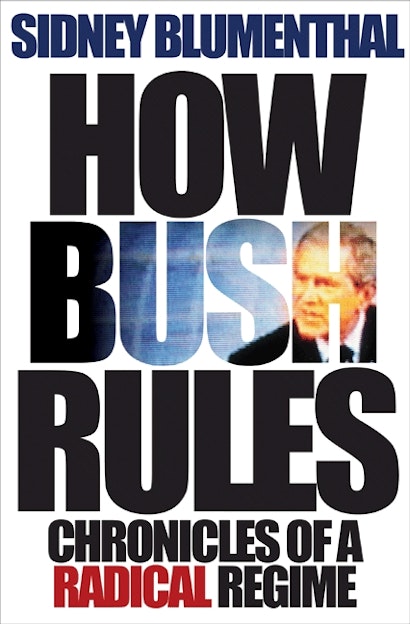 In a series of columns and essays that renowned journalist and former presidential adviser Sidney Blumenthal wrote in the three years following the 2003 invasion of Iraq, a unifying theme began to emerge: that Bush, billed by himself and by many others as a conservative, is in fact a radical — more radical than any president in American history. In How Bush Rules, Blumenthal provides a trenchant and vivid account of the progression of Bush’s radical style — from his reliance on one-party rule and his unwillingness to allow internal debate to his elevation of the power of the vice president.

Taking readers through pivotal events such as the hunt for Iraqi weapons of mass destruction, the rise of the foreign-policy neoconservatives, Abu Ghraib, the war on science, the Jack Abramoff scandal, and the catastrophic mishandling of Hurricane Katrina, the book tracks a consistent policy that calls for the president to have complete authority over independent federal agencies and to remain unbound by congressional oversight or even the law.

In an incisive and powerful introduction, Blumenthal argues that these radical actions are not haphazard, but deliberately intended to fundamentally change the presidency and the government. He shows not only the historical precedents for radical governing, but also how Bush has taken his methods to unique extremes. With its penetrating account of a critical new era in American leadership, How Bush Rules is a devastating appraisal of the Bush presidency.

Sidney Blumenthal, former assistant and senior adviser to President Bill Clinton, is a regular columnist for the Guardian of London and for Salon, and has been a staff writer for the New Yorker, the Washington Post, and other major publications. His books include, most recently, The Clinton Wars (Farrar, Straus & Giroux). He is currently a Senior Fellow at the New York University Center on Law and Security. In 1999, he gave the Willard and Margaret Thorp Lecture in American Studies at Princeton University, speaking on American presidential history.

"Sidney Blumenthal . . . understands the workings of the White House. His recently published book, How Bush Rules: Chronicles of a Radical Regime, collects his columns from November 2003 to April 2006, and they provide week-by-week freeze-frames of an array of significant events over the past three years. (They are, in fact, wonderfully insightful probes by a seasoned journalist with insider experience who knows exactly where to look.)"—John Dean, findlaw.com

"Sid Blumenthal [is] the rare analyst of contemporary affairs who brings to his commentary a deep knowledge of American history and political culture. . . . He was one of the people warning us all along about this administration's radicalism. But not enough of us listened or understood."—David Greenberg, TPMCafe

"How Bush Rules is exemplary, convincingly arguing that George W. Bush is 'the most willfully radical president of the United States,' by documenting in real-time the episodes that have made up his presidency. . . . Blumenthal's columns stand the test of time. Even the oldest pieces aren't dated. . . . Blumenthal is . . . original and illuminating. . . . How Bush Rules is a book comprised of timely interventions that is destined to stand the test of time."—Rick Perlstein, In These Times

"As an advisor to President Clinton, the man has an insider's perspective on how the White House works—or in Bush's case, fails—a claim few authors can make."—Billy Kekevian, Philadelphia City Paper

"While lucid and elegant . . . Sidney Blumenthal is . . . savage in his verdict on George W. Bush in this collection of columns and essays from the Guardian and Salon."—Richard Briand, International Affairs

"A fascinating study of the presidency, of presidential decision making, and of the Bush (II) presidency, journalist Sidney Blumenthal's interesting volume theorizes that George Bush is not really a true conservative. . . . The beauty of this book is that it will stimulate countless hours of discussions, debates, and heated arguments. . . . Highly recommended."—Choice

"To paraphrase Lyndon Johnson, Sidney Blumenthal has been on the inside shooting out and now he's on the outside shooting in. He's hitting his target—the Bush administration—better than anyone else. He sets his sights on the entire Bush agenda—the blundering war in Iraq, a reckless economic policy, a corrupt Congress, and the little-noticed but highly destructive war on honest and objective national security career professionals in the CIA, the State Department, and the military. The result is a devastating account of a radical presidency."—James Carville

"History's judgment of America's 43rd president is likely to be harsh. He presented himself in 2000 as a political centrist who would insist on the highest standards of honesty and accountability and would show his country's 'humble but strong' face to the world. He has governed in a very different and destructive way. The full story of how the Bush who was elected became the Bush who governed will take years to tell. But the real-time draft of history provided by Sidney Blumenthal in these dispatches will be an invaluable resource. He is a partisan, and proud of it. But he is also accurate, convincing, urbane, and far ahead of others in detecting trends and connections."—James Fallows, national correspondent for the Atlantic Monthly and author of Blind Into Baghdad

"Sidney Blumenthal's sustained evisceration of the Bush II presidency is simply thrilling. At once fiery and cool, powered by the author's extraordinary feel for American politics, American history, American popular culture, and the esoteric mysteries of American conservatism, How Bush Rules yields so much fierce pleasure that it does the seemingly impossible: it makes from the materials of these lost years a thing of value."—Hendrik Hertzberg, author of Politics: Observations and Arguments

"Sidney Blumenthal is sharper and better informed than most political scientists. He is not only erudite but also witty, accessible, and very quick (but not at all glib), and he writes like a dream."—Alan Ryan, author of Liberal Anxieties and Liberal Education

"This is compelling, tough-minded journalism. It makes an important contribution to public debate."—Ira Katznelson, Columbia University