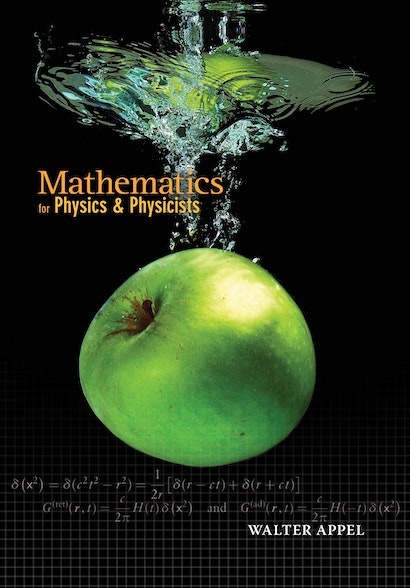 What can a physicist gain by studying mathematics? By gathering together everything a physicist needs to know about mathematics in one comprehensive and accessible guide, this is the question Mathematics for Physics and Physicists successfully takes on.


The author, Walter Appel, is a renowned mathematics educator hailing from one of the best schools of France’s prestigious Grandes écoles, where he has taught some of his country’s leading scientists and engineers. In this unique book, oriented specifically toward physicists, Appel shows graduate students and researchers the vital benefits of integrating mathematics into their study and experience of the physical world. His approach is mathematically rigorous yet refreshingly straightforward, teaching all the math a physicist needs to know above the undergraduate level. Appel details numerous topics from the frontiers of modern physics and mathematics — such as convergence, Green functions, complex analysis, Fourier series and Fourier transform, tensors, and probability theory — consistently partnering clear explanations with cogent examples. For every mathematical concept presented, the relevant physical application is discussed, and exercises are provided to help readers quickly familiarize themselves with a wide array of mathematical tools.

Mathematics for Physics and Physicists is the resource today’s physicists must have to strengthen their math skills and to gain otherwise unattainable insights into their fields of study.

Walter Appel holds a Ph.D. in theoretical physics. He taught mathematics for physics for seven years at the École Normale Supérieure de Lyon in France and currently teaches mathematics at the Henri Poincaré School.

"The majority of applied mathematical fields presently require so much specialization that mathematics often takes a back seat to the particular field of study. This book not only contains a great deal of the mathematics necessary to seriously study physics but also encourages physicists and potential physicists to embrace mathematics."—J.T. Zerger, Choice

"Walter Appel, a theoretical physicist and mathematics educator who currently teaches mathematics at the Henri Poincaré School in France, seeks in his book—appearing here in translation—to cover all the mathematics that a physicist requires above undergraduate level, including recent topics such as convergence, Green functions and Fourier series, as well as offering biographical sketches of mathematicians and problem sets."—Times Higher Education

"There is a law, if not a physical law, that ensures that whenever one is using a standard mathematical technique for a physical problem it is always the special case or a first principles argument that is required. Nothing is straightforward! For such a situation this book is ideal. It presents clear definitions and the rationale for such definitions. The style of the book is very readable and an interesting biographical asides of the mathematicians associated with the topics provide light relief from the depth of the the analysis. The book is both a valuable reference book and is a good pedagogic treatment of mathematical physics. It is a book that should be on many bookshelves."—Brian L. Burrows, Zentralblatt Math

"Mathematics for Physics and Physicists is a well-organized resource today's physicists must have to strengthen their math skills and to gain otherwise unattainable insights into their fields of study. Mathematics has always been and is still a precious. . . . One is delighted to see Appel's book maintains a nice balance between rigorous mathematics and physical applications. . . . It will lead potential physicists to embrace mathematics and they will benefit substantially."—Current Engineering Practice

"This nicely organized and pedagogically excellent book not only covers material that students of physics and engineering are conventionally assumed to need at an advanced undergraduate and graduate level but goes beyond that by including some important modern mathematics not usually included in such texts—such as Lebesgue integration, theory of distributions, probability theory, and differential geometry. It treats the material in a rigorous yet friendly manner from a physicist's perspective, and even includes interesting historical asides that convey to a student the idea that mathematics is not a dead subject. It is an excellent choice as a course textbook or as an addition to a physicist's bookshelf."—Elliott Lieb, Princeton University

"As happens to many of us who teach a mathematics for physicists course to physics students, Appel—who for years taught such a course at the école Normale Supérieure de Lyon—faced the problem of finding a textbook that is neither too soft or imprecise nor too specialized mathematically. This book is Appel's own elegant way out of this dilemma. Physics students at the graduate level will benefit handsomely."—Michael Kiessling, Rutgers University

"Mathematics for Physics and Physicists gives a charming exposition of many important concepts, including topics not covered in standard textbooks. Appel finds an excellent balance between mathematical rigor and physical applications, and the book is interspersed with short biographies of mathematicians and sets of illustrative problems. I wish that kind of book had been available when I was a student."—Andreas Brandhuber, Queen Mary, University of London