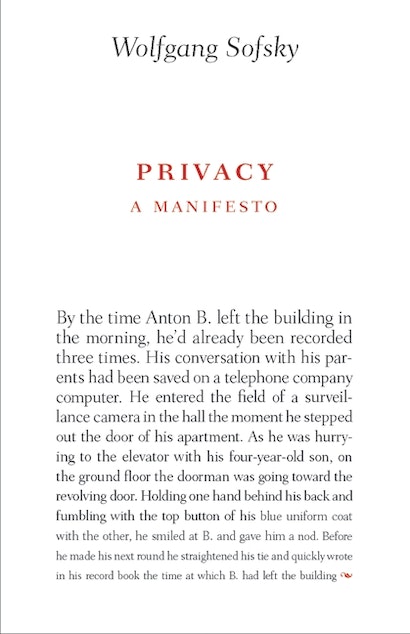 What ever happened to privacy? The simple right to be left alone? Surveillance cameras track our movements. Governments monitor our phone calls, e-mails, and Internet habits. Insurance companies know what drugs we take. Banks and credit agencies keep tabs on our smallest purchases. And new technologies — which gather, store, and share information as never before — have made all of this possible.


But, as the acclaimed social thinker Wolfgang Sofsky shows in this brief and powerful defense of privacy, neither technology nor fears of terrorism deserve all the blame. Rather, through indifference and the desire for attention, we have been accomplices in the loss of our privacy. When we aren’t resigning ourselves to privacy’s disappearance as the inevitable price of living in a new age, we are eagerly embracing opportunities to divulge personal information to people we know — and, increasingly, to people we don’t.


Dramatically demonstrating how much privacy we have already surrendered, Sofsky describes a day in the life of an average modern citizen — in other words, a person under almost constant scrutiny. He also briefly traces the changing status of privacy from ancient Rome to today, explains how liberty and freedom of thought depend on privacy, and points to some of the places where privacy is under greatest threat, from health to personal space.

Privacy is a timely and compelling reminder of just how important privacy is — and just how devastating its loss would be.

"Excellent. . . . At once rhetorically sparse and alarming...Avoiding well-trodden ground, Sofsky is original in suffusing the physical abuses that the state perpetrates against the privacy of the individual."—AdamSmith.org blog

"In this absorbing and upsetting little book, half pungent polemic and half meditation, Sofsky describes how, by means of CCTV cameras and the tracing of mobile phone calls, bus pass use, credit card purchases, e-mail, indeed in almost all ordinary interactions whether in shops or with bureaucracies, every individual is transparently and luminously traceable, leaving a glowing smear behind him as wide as a motorway, and as easy for anyone to follow if they wish. . . . This is an important and very timely book. Its message, implied throughout, is that as one of the great values of civilisation and one of the essentials of personal and psychological integrity, privacy is worth fighting to regain."—A. C. Grayling, The Times

"A manifesto in the classic sense. . . . [T]he author takes us on a personal journey that discusses the cultural roots of privacy, the origins of property and the pivotal nature of freedom of thought. Sofsky covers an enormous amount of territory on his voyage, and digs deep into our core social values to discuss the origins of our behaviours, interactions and innate needs."—John Gilbey, Nature

"In a critique of the decline of personal privacy, Wolfgang Sofsky blames not technology, the government or fears of crime and terrorism but apathy by the citizenry, and a growing culture of fame seeking or a willingness to share private data. . . . A very timely book, in this age of surveillance cameras, credit agencies, computerized tracking and even more, newer intrusions into our lives we don't even yet know about. Or sadder, probably freely signed up for."—Sacramento Book Review

"In this spirited, if at times a little too generalised, defence of privacy, Sofsky rages against not only governmental and technological surveillance but also against the slackness of average citizens who have allowed, and even welcomed, this invasion of their souls."—Fiona Capp, The Age

"Most accept the watching. Wolfgang Sofsky does not. . . . We have allowed our privacy to be sacrificed to spurious promises of security and bureaucratic efficiency. Privacy, he argues in Privacy: A Manifesto, is the individual's fortress. It is an area free of domination, the only one under the individual's control."—Jock Given, Australian Literary Review

"Sofksy's clear and precise language which shows the reader the issues concerning privacy forcefully. But above all, Sofsky's fundamental argumentation, starting from the body of an individual, is a valuable contribution to the discussion concerning the relationship between privacy and surveillance. It can serve as a stable fundament for discussions concerning the value of privacy which often only fall back on legal rules and their interpretation."—Georg Koppen, Metapsychology Online Reviews

"The integrity of our personal lives has been so thoroughly compromised we hardly know what's public and what's private any more, what's important and what's not. Dazed by stimuli, we are immobilised in our decision-making. Sofsky, a German sociologist, calls for us to resist and reassert the powers of independent thought."—Miriam Cosic, Australian

"The chief achievement of this book is to explain why privacy matters. . . . Privacy: A Manifesto is as fine a defence of individual autonomy as you will find. You feel that Sofsky is not merely defending the idea of individual autonomy but has absorbed it as an ethic into his very bones."—Josie Appleton, Spiked Review of Books

"Writing in a readable and fluid style, Wolfgang Sofsky shows just how important privacy is to modern life and, at the same time, just how endangered privacy has become. A reminder that to defend privacy is to defend democracy, individualism, and the good life, this book will interest anyone who has ever felt uneasy about how much governments and corporations know about us."—Hans-Peter Müller, Humboldt University, Berlin