The first critical edition of a poem that named an era 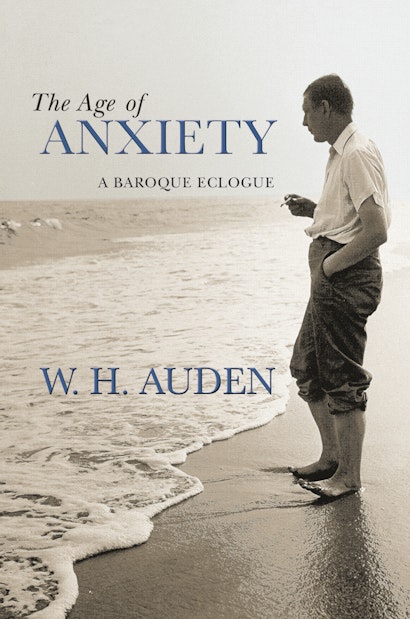 When it was first published in 1947, The Age of Anxiety—W. H. Auden’s last, longest, and most ambitious book-length poem—immediately struck a powerful chord, capturing the imagination of the cultural moment that it diagnosed and named. Beginning as a conversation among four strangers in a barroom on New York’s Third Avenue, Auden’s analysis of Western culture during the Second World War won the Pulitzer Prize and inspired a symphony by Leonard Bernstein as well as a ballet by Jerome Robbins. Yet reviews of the poem were sharply divided, and today, despite its continuing fame, it is unjustly neglected by readers.

This volume—the first annotated, critical edition of the poem—introduces this important work to a new generation of readers by putting it in historical and biographical context and elucidating its difficulties. Alan Jacobs’s introduction and thorough annotations help today’s readers understand and appreciate the full richness of a poem that contains some of Auden’s most powerful and beautiful verse, and that still deserves a central place in the canon of twentieth-century poetry.

Alan Jacobs is the Clyde S. Kilby Professor of English at Wheaton College in Illinois. His books include Original Sin: A Cultural History, The Narnian: The Life and Imagination of C. S. Lewis, and What Became of Wystan: Change and Continuity in Auden's Poetry.

"[Auden's] most significant piece of work. . . . We have in W. H. Auden a master musician of rhythm and note, unable to be dull, in fact an enchanter, under the magic of indigenous gusto . . . . The Age of Anxiety assures us that fear and lust have, in faith and purity, a cure so potent we need never know panic or be defeated by Self."—Marianne Moore, New York Times

"The Age of Anxiety (1947), perhaps the finest of them all, tests Auden's ideas within the experience of modernity."—Lachlan MacKinnon, Times Literary Supplement

"Magnificent . . . . [and] enormously rich in allusion, sound, and intellectual power. . . . For pessimism and naturalism and virtuosity, The Age of Anxiety makes one think of Shakespeare's Tempest."—Jacques Barzun, Harper's Magazine

"[An] emotionally stunning work. . . . One of the splendid poems of our language."—M. L. Rosenthal, New York Herald Tribune

"Princeton University Press's new critical, annotated edition of The Age of Anxiety seeks to repair and renew contemporary readers' relationship with the poem. That it should triumphantly succeed in this task, however, has less to do with unraveling the poem's intricacies than with clearly showing how its many knots are tied. In an expansive preface and through rigorous textual notes, editor and Auden scholar Alan Jacobs outlines the circumstances of the poem's composition, traces the relations between psychology and religious belief as they play out in the text, and firmly situates the work in its historical moment. . . . It can only be hoped that this handsome new edition brings The Age of Anxiety to a new 'pitiful handful'. Those lucky few will discover in its pages one of the last century's great, and greatly neglected, poems."—Geordie Williamson, Australian

"This new edition contains an elegant, unostentatious commentary by Alan Jacobs, an American professor whose previous books include a cultural history of Original Sin."—Richard Davenport-Hines, The Spectator

"Elegantly printed, [The Age of Anxiety] is graced by [Alan] Jacobs's essay-length introduction, which traces the poem's evolution from the time Auden moved from Europe to the US in 1939 to its publication both in Britain (1947) and the US (1948)."—Choice

"This new edition of Auden's The Age of Anxiety under review here provides a timely occasion for the reconceptualization of the structures of the collective imagination in the era of global violence and viral media spectacle. Benefiting from Alan Jacob's revealing and comprehensive prefactory note, the volume invites concerted theoretical effort toward the configuration of a post-apocalyptic poetics."—Nigel Mcloughlin, ABC Studies