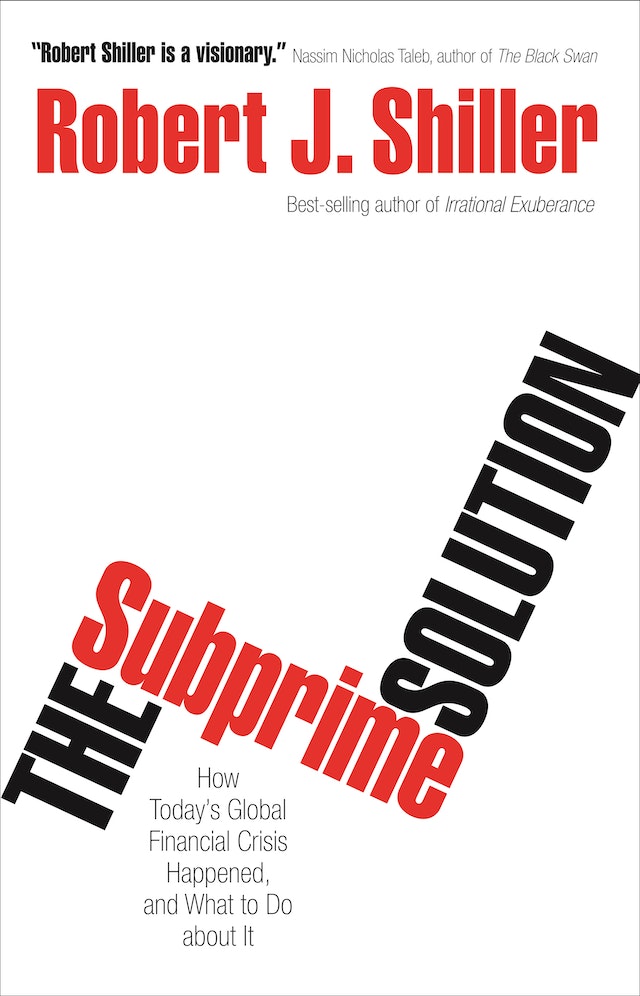 The subprime mortgage crisis has already wreaked havoc on the lives of millions of people and now it threatens to derail the U.S. economy and economies around the world. In this trenchant book, best-selling economist Robert Shiller reveals the origins of this crisis and puts forward bold measures to solve it. He calls for an aggressive response — a restructuring of the institutional foundations of the financial system that will not only allow people once again to buy and sell homes with confidence, but will create the conditions for greater prosperity in America and throughout the deeply interconnected world economy.

Shiller blames the subprime crisis on the irrational exuberance that drove the economy’s two most recent bubbles — in stocks in the 1990s and in housing between 2000 and 2007. He shows how these bubbles led to the dangerous overextension of credit now resulting in foreclosures, bankruptcies, and write-offs, as well as a global credit crunch. To restore confidence in the markets, Shiller argues, bailouts are needed in the short run. But he insists that these bailouts must be targeted at low-income victims of subprime deals. In the longer term, the subprime solution will require leaders to revamp the financial framework by deploying an ambitious package of initiatives to inhibit the formation of bubbles and limit risks, including better financial information; simplified legal contracts and regulations; expanded markets for managing risks; home equity insurance policies; income-linked home loans; and new measures to protect consumers against hidden inflationary effects.

This powerful book is essential reading for anyone who wants to understand how we got into the subprime mess — and how we can get out.

Robert J. Shiller is the best-selling author of Irrational Exuberance and The New Financial Order (both Princeton), among other books. He is the Arthur M. Okun Professor of Economics at Yale University.

"Robert Shiller is two for two in predicting and identifying bubbles that will burst. This book is a must read for anyone predicting future bubbles or charting the course of recovery from our current difficulties."—Lawrence H. Summers, Harvard University

"The subprime crisis has visited ruin on thousands of Americans, and it threatens the health of the global economy. In this timely and fascinating book, Robert Shiller, an expert on irrational behavior in financial markets, conducts a postmortem. How could so many smart people have been so wrong? Shiller concludes that unchecked financial innovation works poorly in asset markets, and he describes the institutions needed to prevent future bubbles."—Gregory Clark, author of A Farewell to Alms

"Reading this exciting book is like watching a skilled surgeon at work. The diagnosis of the subprime mortgage mess is biting in its intensity—the best I have seen—and encompasses the human tragedy as well as the economic and financial crisis. The recommended therapy develops logically from Shiller's analysis and is unique in concept as well as powerful in application. The crystal-clear writing style makes his manifesto a pleasure to read."—Peter L. Bernstein, author of Capital Ideas: The Improbable Origins of Modern Wall Street and Capital Ideas Evolving

"Robert Shiller is a visionary."—Nassim Nicholas Taleb, author of The Black Swan: The Impact of the Highly Improbable

"Rigorous, innovative, and accessible, The Subprime Solution is a wonderful book that will appeal to a wide audience. Robert Shiller is uniquely qualified to analyze the recent unprecedented problems in the mortgage and housing markets, and the way they have spilled over into the wider credit markets. He has again proven his ability to communicate complex ideas and evidence about financial markets."—Diane Coyle, author of The Soulful Science