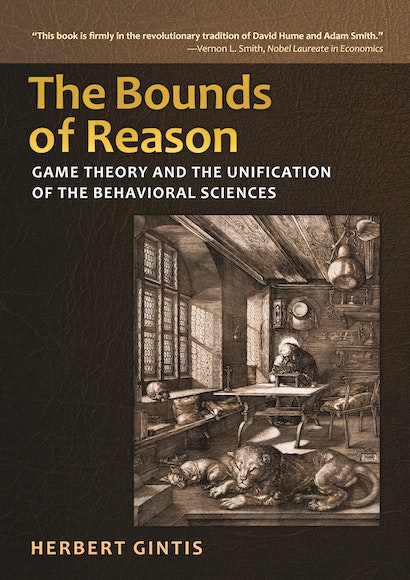 Game theory is central to understanding human behavior and relevant to all of the behavioral sciences — from biology and economics, to anthropology and political science. However, as The Bounds of Reason demonstrates, game theory alone cannot fully explain human behavior and should instead complement other key concepts championed by the behavioral disciplines. Herbert Gintis shows that just as game theory without broader social theory is merely technical bravado, so social theory without game theory is a handicapped enterprise.

Gintis illustrates, for instance, that game theory lacks explanations for when and how rational agents share beliefs. Rather than construct a social epistemology or reasoning process that reflects the real world, game theorists make unwarranted assumptions which imply that rational agents enjoy a commonality of beliefs. But, Gintis explains, humans possess unique forms of knowledge and understanding that move us beyond being merely rational creatures to being social creatures. For a better understanding of human behavior, Gintis champions a unified approach and in doing so shows that the dividing lines between the behavioral disciplines make no scientific sense. He asks, for example, why four separate fields — economics, sociology, anthropology, and social psychology — study social behavior and organization, yet their basic assumptions are wildly at variance. The author argues that we currently have the analytical tools to render the behavioral disciplines mutually coherent.

Combining the strengths of the classical, evolutionary, and behavioral fields, The Bounds of Reason reinvigorates the useful tools of game theory and offers innovative thinking for the behavioral sciences.

Herbert Gintis holds faculty positions at the Santa Fe Institute, Central European University, and University of Siena. He is the author of Game Theory Evolving (Princeton) and the coeditor of numerous books, including Moral Sentiments and Material Interests, Unequal Chances (Princeton), and Foundations of Human Sociality.

"The Bounds of Reason appears as two books in one. One part develops an epistemic theory of the rational actor as an alternative to what is provided by classical game theory, and the other part is a spirited plea to use behavioral game theory as a unifying tool in all behavioral sciences. Both objectives are highly valuable, but combing them both creates friction. Friction creates heat, and Gintis, who thrives gleefully on controversial issues, may be enjoying the prospect of heated discussions."—Karl Sigmund, American Scientist

"The book is a combination of an excellent textbook on game theory and an innovation treatise advocating the unification of the behavioural sciences and refounding of game theory on different epistemic foundations. . . . It is clearly an important contribution to the current debate over the rational actor model that the rise of behaviourial economics has provoked."—Oxonomics

"Gintis' work reflects an amazing breadth of knowledge of the behavioural sciences. He is ever ready to pose unusual questions and to defend unorthodox proposals. The Bounds of Reason is Gintis' most ambitious project to date, one that draws upon all of his extraordinary originality and learning."—Peter Vanderschraaf, Journal of Economics and Philosophy

"This is a lucid, intelligent and very important book. . . . [T]his book is highly recommended for its boldness, scope, technical clarity and intellectual stimulation."—Geoffrey M. Hodgson, Journal of Bioeconomics

"Gintis contributes importantly to a new insight gaining ascendancy: economy is about the unintended consequences of human sociality. This book is firmly in the revolutionary tradition of David Hume (Convention) and Adam Smith (Sympathy)."—Vernon L. Smith, Nobel Prize-winning economist

"Herbert Gintis makes a strong case that game theory—by predicting social norms—provides an essential tool for understanding human social behavior. More provocatively, Gintis suggests that humans have a genetic tendency to follow social norms even when it is to their disadvantage. These claims will be controversial—but they make for fascinating reading."—Eric S. Maskin, Nobel Laureate in Economics

"Recent findings in experimental economics have highlighted the need for a rigorous analytical theory of choice and strategic interaction for the social sciences that captures the unexpectedly wide variety of observed behaviors. In this exciting book, Gintis convincingly argues that an empirically informed game-theoretic approach goes a long way toward achieving this attractive goal."—Ernst Fehr, University of Zurich

"This brave and sweeping book deserves to be widely and carefully read."—Adam Brandenburger, New York University

"The Bounds of Reason makes a compelling case for game theory but at the same time warns readers that there is life beyond game theory and that all social science cannot be understood by this method alone. This splendid book makes skillful use of figures and algebra, and reads like a charm."—Kaushik Basu, Cornell University