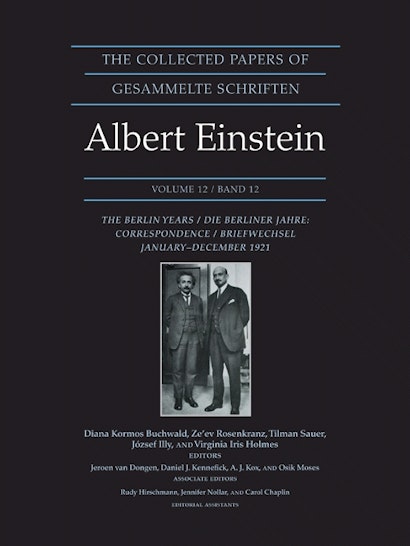 In this latest volume, Einstein’s visible public persona is amply documented in his correspondence, honors and prizes, lectures and travels, articles, and the many solicitations asking him to join public initiatives. Einstein joins a Zionist fundraising mission led by Ch. Weizmann, and he visits the United States for the first time. Einstein travels to major cities, including New York, Boston, and Chicago, and he delivers his now famous Princeton Lectures.

Scientific issues remain at the core of Einstein’s preoccupations. Correspondence with N. Bohr, W. Bothe, P. Ehrenfest, H. Geiger, H. A. Lorentz, L. Meitner, and A. Sommerfeld records Einstein’s interest in and contributions to the emerging modern quantum theory. He addresses conceptual problems, such as the fundamental nature of light and its emission mechanism, in a proposed experiment with canal rays. Einstein continues to engage in original research, other expert opinions, and patent applications.

Throughout the year, Einstein navigates complex territory in his professional and personal life. He travels with his older son to Bologna, yet turns down repeated invitations to Munich. He mends his friendship with M. Born, but receives stinging criticism from F. Haber for traveling to the United States. He supports the nomination of Masaryk for a Nobel Peace Prize, travels to Amsterdam in order to intervene on behalf of Germany at the Paris reparations conference, and assists Russian physicists in their efforts to rebuild and develop Russian science. Einstein’s letters reveal his Social Democratic political positions.

At the California Institute of Technology, Diana Kormos Buchwald is professor of history; Tilman Sauer is senior research associate in history; and Ze'ev Rosenkranz, József Illy, and Virginia Iris Holmes are research staff in history.