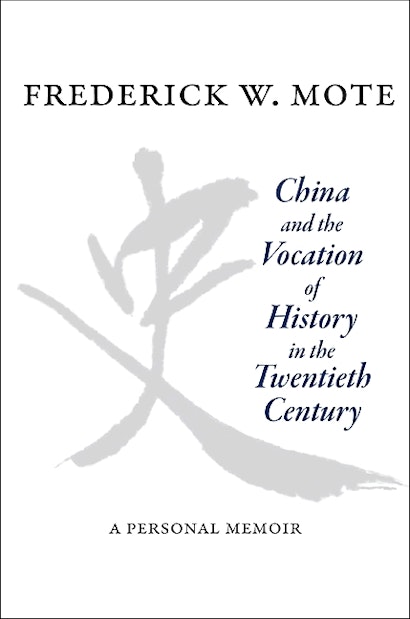 Frederick Mote, one of the twentieth century’s most prominent Sinologists, has written a historian’s memoir that uses observation and personal experiences to understand the intellectual and social transformation of China. Mote’s thought-provoking narrative distills his reflections on modern China and details change in Chinese historical studies in the twentieth century. Mote assesses the work of historians prior to 1950 and the domination of China by the Communist Chinese, hints at the direction of Chinese historical studies in the post-1950s era, and explores the continuous change in the ways Chinese history has been understood among the Chinese themselves and within the field.

Language training in the Army Specialized Training Program and subsequent wartime service with the Office of Strategic Services serendipitously drew Mote into the study of China, the immense discipline to which he devoted his life. Previously unpublished material in the text, appendices, and addenda document such diverse encounters as the destruction of a Catholic mission by the Communists, Sino-Japanese relations in China in the aftermath of World War II, the growth of East Asian Studies at Princeton University, and a 1974 delegation visit to China. Evaluating Chinese ideas and attitudes toward revolution, modernization, and war, Mote measures the weight and meaning of Chinese historical study.

Frederick W. Mote (1922-2005), whose research interests were China's Yuan and Ming dynasties, taught Chinese history and language at Princeton University from 1956 to 1987 and was instrumental in developing East Asian Studies there. His works include the Intellectual Foundations of China and Imperial China, 900-1800.