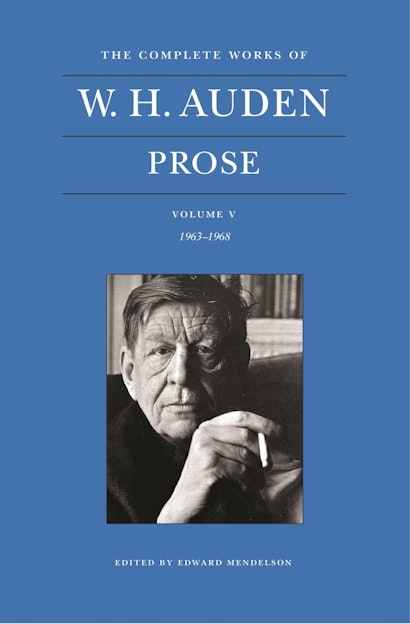 This fifth volume of W. H. Auden’s prose displays a great writer’s mind in its full maturity of wisdom, learning, and emotional and moral intelligence. It contains his most personally revealing essays, the ones in which he wrote for the first time about the full history of his family life, his sexuality, and the development of his moral and religious beliefs. Among these works are the lightly disguised autobiographies that appear in long essays on the Protestant mystics and on Shakespeare’s sonnets. The book also features the full text of his T. S. Eliot Memorial Lectures, Secondary Worlds, and many unpublished or unavailable lectures and speeches.

Edward Mendelson’s introduction and comprehensive notes provide biographical and historical explanations of obscure references. The text includes corrections and revisions that Auden marked in personal copies of his work and that are published here for the first time.

Edward Mendelson is the literary executor of the Estate of W. H. Auden and the Lionel Trilling Professor in the Humanities at Columbia University. His books include Early Auden, Later Auden, The Things That Matter, and Lives of the New York Intellectuals.

"Stupendous collections. . . . [The Complete Works of W.H. Auden: Prose] is becoming one of the great achievements of current literary scholarship."—Fintan O'Toole, New York Review of Books

"No one could take [Auden] for anything less than an extremely accomplished, fluent, professional writer . . . As an editor, Mendelson is meticulous, judicious and quite extraordinarily thorough. To say that Princeton University Press, in producing such handsome and usable volumes, has matched Mendelson's editorial standards is to give high praise indeed."—Stefan Collini, London Review of Books

"This rich horde, beautifully produced and meticulously edited, will be my bedside reading for the rest of the year and beyond."—David Collard, Times Literary Supplement

"Praise for previous volumes: "The articles will delight any reader with their wit, charm, and elegance.""—Charles Rosen, New York Review of Books

"Praise for previous volumes: "When you add in the volumes already devoted to plays, libretti, poems, it becomes hard to avoid describing the whole enterprise as heroic. In fact it could also be described as unique, for no other twentieth-century English poet has been so fully and patiently honoured.""—Frank Kermode, London Review of Books

"The fifth and sixth volumes of Auden's collected prose . . . Bring to a conclusion a project that began in 1996 under the meticulous editorship of Edward Mendelson. It is hard to find superlatives adequate to the accomplishment. The successive volumes, spaced roughly by decades and each running from some 600 to over 800 pages, include lively and detailed introductions, which end up forming a kind of literary biography of Auden as essayist. . . . To add to the pleasures of editorial precision, the volumes themselves have been beautifully produced."—Eric Ormsby, Wall Street Journal

"Where should the praise go for this magnificent edition of W.H. Auden's prose, now rounded off by its final two volumes? To the great Anglo American poet himself for having produced such incisive and memorable criticism? To Edward Mendelson, whose scrupulous editing calls to mind Samuel Beckett's phrase ‘No author better served'? Or to designer Jan Lilly and the Princeton University Press for the elegance and beauty of the books themselves? One thing is certain: This is what scholarly publishing is meant to be."—Michael Dirda, The Washington Post

"Praise for previous volumes: "The only way to get at Auden as he happened, year by year, bit by bit, and not as he, or his later biographers, want us to think of him.""—Tom D'Evelyn, Boston Book Review

"Mendelson's editions of Auden's works are among the great achievements of modern literary scholarship and his introduction here is a masterpiece of the editor's tactful art, guiding readers through the heaped documents to those where the poet writes most significantly. . . about himself and his work."—Jeremy Noel-Tod, Literary Review

"Anyone who cares about literature will be grateful for . . . The final installments of The Complete Works of W. H. Auden: Prose."—Leo Robson, New Statesman

"[B]eautifully designed by Princeton University Press, edited with great care. No other poet of the 20th century has been honoured by this treatment. Perhaps no other deserves it."—Robert Fulford, National Post

"W. H. Auden was a prolific writer. Volumes 5 and 6 of the complete works collect the prose he wrote in the last decade of his life. The essays and reviews illustrate the breadth of Auden's erudition, his engagement with a Christian ethos, and the clarity that belief brought to his world. . . . These volumes, and the entire series, should be available in all libraries."—R. T. Prus, Choice

"Princeton University Press is publishing [Auden's] complete works, verse and prose, in (by my count) 10 beautiful volumes, splendidly edited by Edward Mendelson. . . . These two volumes of prose have only the unity of purpose embodied in Auden himself: his style, his turns of mood and phrase."—Denis Donoghue, Irish Times

"If Mendelson's clarion call does not convert self-professed literature scions, nothing will. . . . Research scholars and general readers will be swept away by Auden's range of reading and Mendelson's scrupulous editing. This definitive volume should be in all English departments throughout the world."—Subhasis Chattopadhyay, Prabuddha Bharata