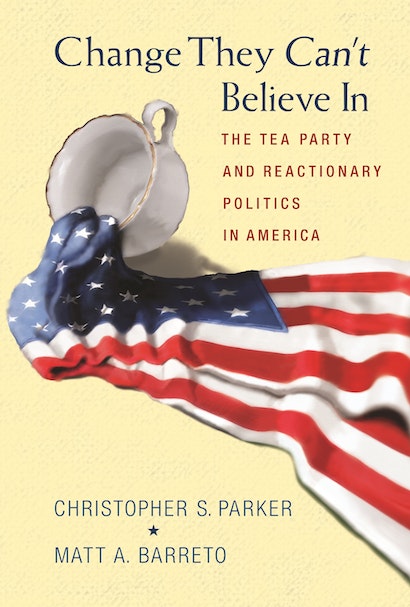 Are Tea Party supporters merely a group of conservative citizens concerned about government spending? Or are they racists who refuse to accept Barack Obama as their president because he’s not white? Change They Can’t Believe In offers an alternative argument—that the Tea Party is driven by the reemergence of a reactionary movement in American politics that is fueled by a fear that America has changed for the worse. Providing a range of original evidence and rich portraits of party sympathizers as well as activists, Christopher Parker and Matt Barreto show that what actually pushes Tea Party supporters is not simple ideology or racism, but fear that the country is being stolen from “real Americans”—a belief triggered by Obama’s election. From civil liberties and policy issues, to participation in the political process, the perception that America is in danger directly informs how Tea Party supporters think and act.

The authors argue that this isn’t the first time a segment of American society has perceived the American way of life as under siege. In fact, movements of this kind often appear when some individuals believe that “American” values are under threat by rapid social changes. Drawing connections between the Tea Party and right-wing reactionary movements of the past, including the Know Nothing Party, the Ku Klux Klan of the 1920s, and the John Birch Society, Parker and Barreto develop a framework that transcends the Tea Party to shed light on its current and future consequences.

Linking past and present reactionary movements, Change They Can’t Believe In rigorously examines the motivations and political implications associated with today’s Tea Party.

"A scathing analysis of the Tea Party movement, linking it in spirit to the Ku Klux Klan and the John Birch Society. Taking today's conservative populists to be dangerous and their ideas self-incriminating, the authors speculate that Tea Party supporters may perceive of social change as subversion. Based on research and interviews, they suggest racism, desire for social dominance . . . drives the Tea Party."—Publishers Weekly

"Change They Can't Believe In offers valuable empirical data on the Tea Party, and its focus on supporters' antagonism toward Obama is critical to understanding the movement."—Michael O'Donnell, New Republic

"[A] rigorous scholarly investigation of the tea party. . . . Parker and Barreto make the case that tea party supporters are driven above all by 'anxiety incited by Obama as President.' Intuitively, this may already make sense to many readers, but the authors muster the evidence in support, dividing and subdividing different categories of political activity and belief to arrive at a firm basis for their conclusion. . . . [S]upported by reasoned facts in place of political passions."—Kirkus Reviews

"In Change They Can't Believe In, Parker and Barreto examine the emergence of the Tea Party in the wake of the Obama presidency. . . . In addition to marshaling a great deal of original data, the authors capably place the Tea Party movement in a historical context."—Choice

"Parker and Barreto have conducted exacting research to probe the contours of support for the Tea Party, and their innovative, scientific, and critical book highlights how Tea Party sympathizers differ from mainstream conservatives in crucial ways. The authors demonstrate that despite the public image of the Tea Party, its supporters cannot be characterized as either patriotic or freedom loving. This is a must-read for all students of American politics and anyone concerned about democracy in America."—Michael C. Dawson, University of Chicago

"This original and important book is the most well-researched and significant scholarly study of the Tea Party movement and its members yet to appear. Unfolding a profile of Tea Party activists threatened by liberal changes and ill-formulated images of big government and state regulatory power, Parker and Barreto tease out core beliefs and views, ranging from commonplace conservatism to racist antagonism. Their book is an outstanding contribution to understanding American politics."—Desmond King, University of Oxford

"The Tea Party has attracted a great deal of attention since it burst on the scene in 2010, but few books about the movement have rested on as impressive an empirical foundation as this one. The portrait Parker and Barreto paint of the model Tea Party sympathizer is chilling and sure to anger movement apologists who insist the group is made up of typical patriotic conservatives. This timely, important work deserves the widest audience possible."—Doug McAdam, Stanford University

"Through a statistically and historically informed analysis of the views of Tea Party sympathizers, Parker and Barreto show that at bottom, many condemn America as it has come to be: a country in which white straight Christian men do not set standards for all. Precisely because their American dreams must go unfulfilled, the passions of these sympathizers will remain forces in American life for years to come."—Rogers M. Smith, University of Pennsylvania

"This book's main contribution to the growing literature on the Tea Party movement is its focus on the characteristics and political beliefs of Tea Party supporters—rather than activists—and its theoretical framework, which locates the Tea Party in the broader structure of far-right social and political movements in the United States."—Alan Abramowitz, Emory University