A revealing look inside a controversial movement 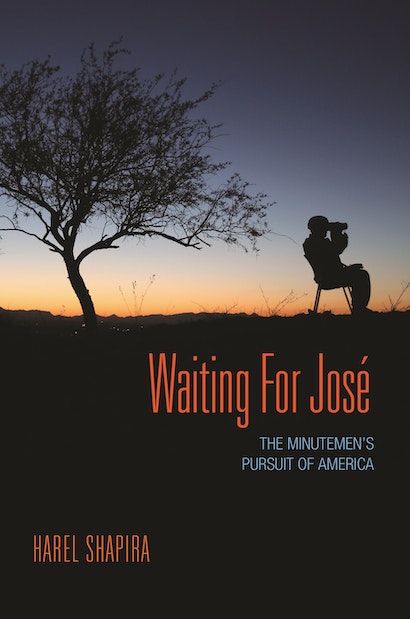 They live in the suburbs of Tennessee and Indiana. They fought in Vietnam and Desert Storm. They speak about an older, better America, an America that once was, and is no more. And for the past decade, they have come to the U.S. / Mexico border to hunt for illegal immigrants. Who are the Minutemen? Patriots? Racists? Vigilantes?

Harel Shapira lived with the Minutemen and patrolled the border with them, seeking neither to condemn nor praise them, but to understand who they are and what they do. Challenging simplistic depictions of these men as right-wing fanatics with loose triggers, Shapira discovers a group of men who long for community and embrace the principles of civic engagement. Yet these desires and convictions have led them to a troubling place.

Shapira takes you to that place—a stretch of desert in southern Arizona, where he reveals that what draws these men to the border is not simply racism or anti-immigrant sentiments, but a chance to relive a sense of meaning and purpose rooted in an older life of soldiering. They come to the border not only in search of illegal immigrants, but of lost identities and experiences.

Harel Shapira is an assistant professor of sociology at the University of Texas, Austin.

"A valuable look at the birth of a populist paramilitary formation, one whose opponents may not dismiss so easily after reading this evenhanded book."—Kirkus Reviews

"This fascinating study is an honest, nuanced, and intimate look at not so much a movement but the people who make it happen. Shapira offers enough sociological theory to appeal to sociologists, but his stories of the Minutemen make this work appealing to all who want to understand the movement and immigration issues in general."—Library Journal

"Regardless of one's political leanings, this is a promising, accessible book by a first-time academic author who describes the Minutemen he finds as, at heart, the detritus of lost wars and people who are 'afraid of America turning into Mexico.'"—Lee Maril, Times Higher Education

"Applying basic principles of ethnographic research, Shapira was interested not so much in what the Minutemen had to say, but what they did and why. In describing, what they wear, what they carry, and how they spend their time, his book has the kind of authenticity that comes from painstaking observation. You can't phone it in. You have to go."—Julia Ann Grimm, Santa Fe New Mexican

"Deeply insightful. . . . Reading Waiting for Jose to learn about the mythic Minuteman movement doesn't simply satisfy the sociological curiosity of comprehending anti-immigrant warriors whose heyday may soon be coming to a close. It's also instructive in helping us realize that immigrants are not the only ones finding it difficult to 'assimilate' themselves to a very different America than the one many of us grew up in."—Esther Cepeda, Anchorage Daily News

"Although the book will be of specific interest to those with an interest in migration, security, social movements, and masculinities, it invites a much broader readership. Its narrative style and uncomplicated prose make it accessible to a wider public. This, coupled with its accessible length and topical nature, makes it an ideal text for teaching at any level. Undergraduates and graduate students alike will find this a readable, refreshing, and insightful work."—Maryann Bylander, Journal on Migration and Human Security

"Harel Shapira has crafted a fascinating and insightful account of the complex practices of civic identity in contemporary US society. In all, Waiting for Jose represents a significant contribution to current scholarship on social movements, border rhetorics, and the formation of the US civic imaginary."—D. Robert DeChaine, International Review of Modern Sociology

"Shapira has written a fine book about identity construction and masculinity fueled by racism and a longing for community. Very few books on politics do that."—Ronnee Schreiber, Perspectives on Politics

"Shapira provides us with a window into the lives and practices of a group of ideologically inconsistent, sometimes confrontational, yet ultimately sympathetic, civic-minded actors."—Justin Allen Berg, American Journal of Sociology

"Waiting for José brings the Minutemen's experience to the reader still warm. If the explanation is not airtight, it is because the Minutemen in the book are alive."—Nicolas Eilbaum, Contemporary Sociology

"Shapria's balanced approach is quite rare, because he spends much time revealing close details of a conservative movement that was a precursor to the Tea Party; and he accomplishes this by writing with a level of empathy, balanced with professionalism that is refreshingly rare in today's political climate. Waiting for Jose would be a very suitable supplemental textbook for any Sociology or Political Science course dealing with issues of immigration on the United States southern border."—John R. Lewis, Journal of American Studies of Turkey

"Grab your night-vision goggles and your thermal scopes, and join Shapira as he sits with the Minutemen along the jagged Arizona-Mexico border. As the men wait for a José that might never come and yearn together for an America that is long gone—or perhaps, never was—we learn about the dispositions and desires of a group of people that has been consistently misunderstood and misrepresented. A captivating, theoretically inspired narrative in a refreshingly new sociological voice. This is ethnography at its best."—Javier Auyero, author of Patients of the State

"Waiting for José is an empathetic and beautifully written ethnography. It brings into sociological focus the stories of Americans whose patriotism and search for meaningful lives brings them to mount voluntary patrols against illegal immigrants on the U.S. / Mexico border. Media portrayals of these Minutemen are often mere cartoons; Harel Shapira fills out both the human picture and its larger social implications."—Craig Calhoun, director of the London School of Economics and Political Science

"This is a courageous book. Harel Shapira put himself in danger to dig out the story of the Minutemen; he shows a kind of ethical courage as well, by probing sympathetically their thoughts and feelings. His book reveals an 'Other America' whose disappointments and anger the rest of us need to understand. He helps us do this in prose worthy of George Orwell."—Richard Sennett, author of The Corrosion of Character

"Waiting for José is a haunting and important book about the activists who patrol the border between Mexico and the United States, hoping to save their country and redeem their own lives, too. Harel Shapira resists the urge to praise or blame the Minutemen for their campaign against 'illegal immigrants.' Instead he aims to understand how and why they've mobilized, and to explain what their movement means. Every page of this deeply affecting ethnography is on the mark."—Eric Klinenberg, author of Going Solo: The Extraordinary Rise and Surprising Appeal of Living Alone

"Waiting for José critically explores the lifeworlds of the Minuteman Project with care, subtlety, and charm. Shapira demythologizes the Minutemen, poking holes in depictions of them as angry xenophobes with loose triggers, and shows them as vulnerable, ageing men in search of meaning. This portrait of the Minutemen is ultimately a portrait of social isolation and alienation."—Shehzad Nadeem, author of Dead Ringers: How Outsourcing is Changing the Way Indians Understand Themselves

"Shapira has crafted a very readable, entertaining, and highly articulate work. He has a novelist's ability to describe situations, the physical environment, and the individuals in them, and a sociologist's training to be able to place his subjects in a broader sociohistorical landscape."—David C. Brotherton, coauthor of Banished to the Homeland: Dominican Deportees and Their Stories of Exile