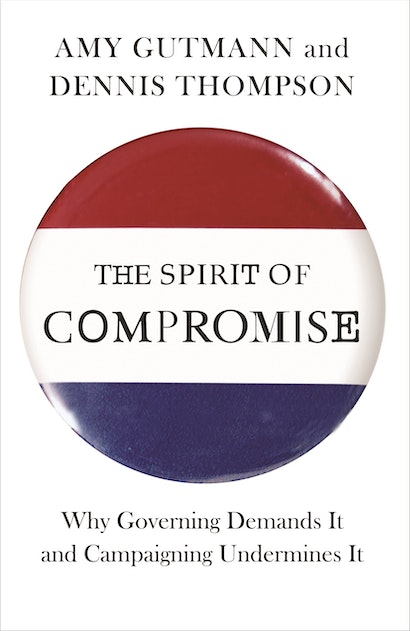 If politics is the art of the possible, then compromise is the artistry of democracy. Unless one partisan ideology holds sway over all branches of government, compromise is necessary to govern for the benefit of all citizens. A rejection of compromise biases politics in favor of the status quo, even when the rejection risks crisis. Why then is compromise so difficult in American politics today?

In The Spirit of Compromise, eminent political thinkers Amy Gutmann and Dennis Thompson connect the rejection of compromise to the domination of campaigning over governing—the permanent campaign—in American democracy today. They show that campaigning for political office calls for a mindset that blocks compromise—standing tenaciously on principle to mobilize voters and mistrusting opponents in order to defeat them. Good government calls for an opposite cluster of attitudes and arguments—the compromising mindset—that inclines politicians to adjust their principles and to respect their opponents. It is a mindset that helps politicians appreciate and take advantage of opportunities for desirable compromise.

Gutmann and Thompson explore the dynamics of these mindsets by comparing the historic compromises on tax reform under President Reagan in 1986 and health care reform under President Obama in 2010. Both compromises were difficult to deliver but only tax reform was bipartisan. Drawing lessons from these and other important compromises—and failures to compromise—in American politics, Gutmann and Thompson propose changes in our political institutions, processes, and mindsets that would encourage a better balance between campaigning and governing.

Calling for greater cooperation in contemporary politics, The Spirit of Compromise will interest all who care about whether their government leaders can work together.

"Provide[s] grist for thinking through the difficulties of compromise in [domestic policy], from tragic choices at desperate moments of history to the routine nastiness in American public life today. . . . Until recently, who would have thought it necessary to offer Americans advice in the ways of compromise? We used to enjoy a reputation for being a practical-minded people, our politicians being regarded as an all-too-flexible species. But something has changed, and according to Gutmann and Thompson, the change has to do with the relation of campaigning and governing. . . . Gutmann and Thompson end their book with recommendations to strengthen the spirit and practice of compromise."—Paul Starr, The New Republic

"Gutmann and Thompson articulately identify the conundrum that has made compromise unlikely, if not impossible, in Washington."—Alexander Heffner, Philadelphia Inquirer

"Scholars will appreciate the authors' lucid analysis of the dynamics of political compromise."—Library Journal

"'Compromise is difficult, but governing a democracy without compromise is impossible.' So begins this excellent, much needed corrective to the contemporary political scene, which eschews compromise in politics in favor of war analogies. . . . This excellent book should be required reading for every member of Congress, and deserves a wide readership among the voting public."—Choice

"In this 'no excuses' look at Washington gridlock, Gutmann and Thompson offer a clear-eyed examination of the forces that bring warring political leaders together or keep them apart. Far from a Pollyanna-like plea for compromise above all, this book uses fascinating historical and recent examples, and analysis, to expose the sources of dysfunction and to argue for how they can be overcome. I wish every policymaker would read it!"—Judy Woodruff, PBS NewsHour

"In an era of partisan polarization, congressional gridlock, and plunging public trust in government, this book could not be more timely. Deftly weaving together political theory and practical politics, Gutmann and Thompson trace the contours of necessary and honorable compromise, and propose reforms that would make it more likely."—William Galston, Brookings Institution

"Americans tend to think that compromise is opposed to principle, and that there is therefore something dishonorable about it. In this marvelous book, two of our leading theorists of democracy defend the opposite view. Our democracy works only with mutual respect among those who disagree and requires the principled prudence that produces successful compromise. In a world of partisan gridlock and the politics of division, The Spirit of Compromise is a sane voice calling us to a better alternative."—Kwame Anthony Appiah, author of Cosmopolitanism: Ethics in a World of Strangers

"America now finds itself the bound prisoner of congressional gridlock. We all honestly know what we must do, but just cannot find the common purpose to do what is obviously necessary to pull the country on the road back to financial well-being and long-term prosperity. In this book, two eminent political scientists show us just why compromise seems more elusive than ever—and yet more importantly—what we can do about it. Oh, one would surely hope that those who cherish the legislative craft will read and heed this book's timely message!"—Alan K. Simpson, U.S. Senator, Wyo. (Retired)

"Gutmann and Thompson have written an incisive and engaging analysis—with many contemporary examples—of why compromise is necessary in democratic politics and why it is increasingly difficult in our democracy. Watching our politicians at work, I can't imagine a more timely book."—Michael Walzer, Institute for Advanced Study

"Gutmann and Thompson rely on both theory and history to show why compromise is essential to good governing. They provide a perceptive analysis of the tensions between campaigning and governing in contemporary democracies, especially the United States. Their account is thought-provoking and timely."—Nannerl O. Keohane, author of Thinking about Leadership

"The Spirit of Compromise advances an urgent and illuminating argument about the essential place of compromise in democratic politics. It offers an incisive account of the predicament of American politics today and shows how, in spite of real disagreements, political leaders might come together for the sake of the common good."—Russell Muirhead, Dartmouth College

"As one would expect from Gutmann and Thompson, The Spirit of Compromise thoughtfully and effectively blends theory with real-life examples to underscore a larger important thesis: the political process of compromise matters."—Norman J. Ornstein, coauthor of The Broken Branch: How Congress Is Failing America and How to Get It Back on Track