An insightful reflection on the mathematical soul 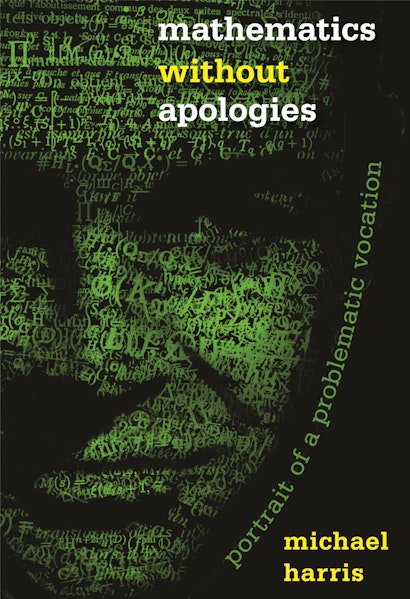 What do pure mathematicians do, and why do they do it? Looking beyond the conventional answers—for the sake of truth, beauty, and practical applications—this book offers an eclectic panorama of the lives and values and hopes and fears of mathematicians in the twenty-first century, assembling material from a startlingly diverse assortment of scholarly, journalistic, and pop culture sources.

Drawing on his personal experiences and obsessions as well as the thoughts and opinions of mathematicians from Archimedes and Omar Khayyám to such contemporary giants as Alexander Grothendieck and Robert Langlands, Michael Harris reveals the charisma and romance of mathematics as well as its darker side. In this portrait of mathematics as a community united around a set of common intellectual, ethical, and existential challenges, he touches on a wide variety of questions, such as: Are mathematicians to blame for the 2008 financial crisis? How can we talk about the ideas we were born too soon to understand? And how should you react if you are asked to explain number theory at a dinner party?

Disarmingly candid, relentlessly intelligent, and richly entertaining, Mathematics without Apologies takes readers on an unapologetic guided tour of the mathematical life, from the philosophy and sociology of mathematics to its reflections in film and popular music, with detours through the mathematical and mystical traditions of Russia, India, medieval Islam, the Bronx, and beyond.

Michael Harris is professor of mathematics at the Université Paris Diderot and Columbia University. He is the author or coauthor of more than seventy mathematical books and articles, and has received a number of prizes, including the Clay Research Award, which he shared in 2007 with Richard Taylor.

"Mathematics without Apologies . . . provide[s] an unmatched perspective on life in this 'problematic vocation' . . . a kaleidoscope of philosophical, sociological, historical and literary perspectives on what mathematicians do, and why."—Amir Alexander, Nature

"Harris is the kind of mathematician one hopes to meet at an intimate dinner party. . . . Recommended for curious readers in any subject wishing to answer problems in creative ways."—Library Journal

"If you are interested at all in what mathematics really is and what the best mathematicians really do (and you're up for an intellectual challenge), I highly recommend that you get a copy and set some time aside for delving into this unusual book. . . . Harris manages to move back and forth between the deepest ideas about mathematics at the frontiers of the subject, insightful takes on the sociology of mathematical research, and a variety of topics pursued in a sometimes gonzo version of post-modern academic style. You will surely sometimes be baffled, but definitely will come away knowing about many things you'd never heard of before, and with a lot of new ideas to think about."—Peter Woit, Not Even Wrong

"[A] wry and insightful look at what being a pure mathematician is all about, as seen from the inside."—Steven Strogatz, Physics Today

"This extraordinary, extravagant Apologia pro Vita Sua—the title more deliberately echoes G. H. Hardy's renowned 1940 memoir A Mathematician's Apology—heads off in many directions and is all the more admirable for it. The book is part memoir, part account of the arcane research that brought number theorist Harris a measure of fame, and part sociological/economic study of academic mathematics. Together with interspersed chapters amusingly titled ‘How to Explain Number Theory at a Dinner Party,' the work offers erudition, panache, and an intriguing authorial voice. . . . A book to be read and then read again."—Choice

"The erudition displayed by Harris in this book is amazing. . . . The satisfaction it gives is more than rewarding."—A. Bultheel, Adhemar Bultheel Blog

"This book is a rich tapestry interweaving various aspects of culture and tradition—social, economic, religious, aesthetic—in an attempt to explicate the three basic philosophical questions underlying mathematics as a human endeavor: the What, Why and How of it."—Swami Vidyanathananda, Prabuddha Bharata

"Michael Harris is more than a mathematician; he is a Parisian intellectual."—Brendan Larvor, London Mathematical Society Newsletter

"Even apprentice number theorists can understand and enjoy this well-written book. Harris's theories are coherent and rational, and he provides lay readers clarity into what contemporary mathematicians really do."—Bernadette Trainer, Mathematics Teacher

"Michael Harris is among the foremost mathematicians in the world."—John J. Watkins, Mathematical Intelligencer

"Harris's book is a wonderfully accomplished mix of many things: an auto-ethnography of a charismatic mathematician; an extended conversation regarding beauty, truth, and the good in pure mathematics; a reflection on the doing and practice of it; and an unapologetic embrace of the playfulness of mathematical thought."—Brian Rotman, professor emeritus, Ohio State University

"Michael Harris writes with all-absorbing exuberance and intensity about what it feels like from the inside to do mathematics, and he succeeds, for the uninitiated like myself, in conveying the motives and the pleasure that have impelled him and his precursors and peers to seek to understand. But Mathematics without Apologies is many things besides: it combines thoughtful personal memoir, sharp social chronicle, entertaining literary analysis, and jeux d'esprit reflecting on formulae for love or on the hidden structures in the fiction of Thomas Pynchon. Most importantly, however, Harris issues a clarion call for the autonomy of research in our time. He defends—fiercely and lucidly—the pursuit of understanding without recourse to commercial interests or other principles of utility. This is an original and passionate book; Michael Harris has fashioned much-needed luminous arguments for the cause of intellectual independence."—Marina Warner, professor of English and creative writing, Birkbeck, University of London, and author of Stranger Magic: Charmed States and the Arabian Nights

"Michael Harris opens the doors and gently guides you into a magic world. Once inside, you can't help but feel mesmerized, eager to see how deep the rabbit hole goes. And no wonder: a major thinker of our time is talking to you about math and so much more, like you've never heard before."—Edward Frenkel, author of Love and Math: The Heart of Hidden Reality

"Here is a quilted book about mathematical practice, each patch wonderfully prepared. Part invitation to number theory, part autobiography, part sociology of mathematical training, Mathematics without Apologies brings us into contemporary mathematics as a living, active inquiry by real people. Anyone wanting a varied, cultured, and penetrating view of today's mathematics could find no better place to engage."—Peter Galison, author of Einstein's Clocks, Poincaré's Maps: Empires of Time

"In Mathematics without Apologies, an important mathematician reports to outsiders straight from the frontier of knowledge. Alternating chapters of more traditional popularization with a sophisticated essayistic discourse that naturally blends the historical, the autobiographical, and the philosophical, Michael Harris manages to convey the complexity, the magic, and the near-mystical quality of modern mathematical research."—Apostolos Doxiadis, coauthor of Logicomix: An Epic Search for Truth and author of Uncle Petros and Goldbach's Conjecture: A Novel of Mathematical Obsession

"Mathematics without Apologies is a math book like no other. Harris mixes number theory, literary criticism, and philosophy into a powerful meditation on mathematics as it is really practiced, vaporizing all clichés and romantic myths within his astoundingly broad reach."—Jordan Ellenberg, author of How Not to Be Wrong: The Power of Mathematical Thinking

"Becoming a mathematician is like becoming a musician. The apprentice must master the technique, but along the way he also has to develop an aesthetic sense. Only then can he become a master in his own right. In this lively book, Harris examines the mathematician's craft from every angle, from the elementary and familiar to the sophisticated and exotic, and questions the ethics of using mathematics in finance. Mathematics without Apologies is a very personal book dealing with timeless questions."—Ivar Ekeland, mathematician and economist, author of The Best of All Possible Worlds and The Cat in Numberland

"As the only child of John von Neumann, I have long tried to understand what it is that mathematicians do. Michael Harris addresses the question from every angle. I still don't have a complete handle on the answer, but I'm certainly puzzled at a much higher level than before."—Marina von Neumann Whitman, University of Michigan

"Harris offers a unique and passionate view of the life and work of contemporary mathematicians. Rich in detail and marvelously broad in scope, Mathematics without Apologies gives an unforgettable account of the frustrations, elations, and sheer wonder of doing mathematics."—Barry Mazur, Harvard University

"Mathematics without Apologies is a work of relentless intelligence that depicts Harris's experience of mathematics, but it is not at all a mathematician's autobiography. It is a madly erudite and creative reflection on the mathematical life."—Colin McLarty, author of Elementary Categories, Elementary Toposes

"Harris vividly conveys what it is to work as a researcher in pure mathematics today. Through a series of novel and unexpected perspectives, he transforms readers' preconceptions of this activity. What we encounter here are the reflections of an erudite mathematician, uncommonly well read outside his field, on the nature and purpose of his subject."—David Corfield, author of Towards a Philosophy of Real Mathematics