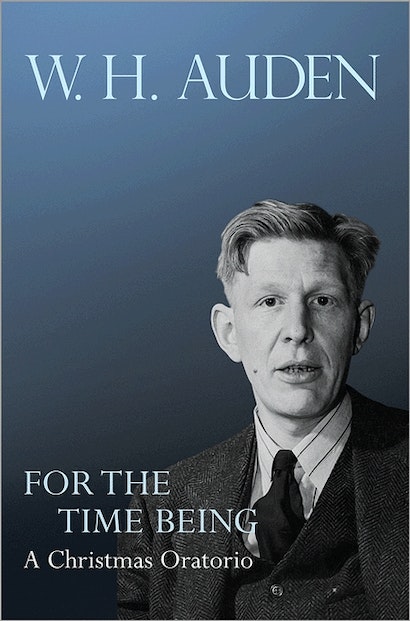 For the Time Being is a pivotal book in the career of one of the greatest poets of the twentieth century. W. H. Auden had recently moved to America, fallen in love with a young man to whom he considered himself married, rethought his entire poetic and intellectual equipment, and reclaimed the Christian faith of his childhood. Then, in short order, his relationship fell apart and his mother, to whom he was very close, died. In the midst of this period of personal crisis and intellectual remaking, he decided to write a poem about Christmas and to have it set to music by his friend Benjamin Britten. Applying for a Guggenheim grant, Auden explained that he understood the difficulty of writing something vivid and distinctive about that most clichéd of subjects, but welcomed the challenge. In the end, the poem proved too long and complex to be set by Britten, but in it we have a remarkably ambitious and poetically rich attempt to see Christmas in double focus: as a moment in the history of the Roman Empire and of Judaism, and as an ever-new and always contemporary event for the believer. For the Time Being is Auden’s only explicitly religious long poem, a technical tour de force, and a revelatory window into the poet’s personal and intellectual development. This edition provides the most accurate text of the poem, a detailed introduction by Alan Jacobs that explains its themes and sets the poem in its proper contexts, and thorough annotations of its references and allusions.

Alan Jacobs is the Clyde S. Kilby Professor of English at Wheaton College in Illinois. He previously edited Auden's The Age of Anxiety for this series, and is the author of several books, including most recently The Pleasures of Reading in an Age of Distraction.

"[Auden's] four long poems . . . remain the astounding heart of his work. . . . In For the Time Being, the most successful of these poems, [the characters] are at once participants in the Nativity story and drunken New Yorkers."—Adam Gopnik, New Yorker

"For the Time Being is efficiently annotated and interestingly introduced."—Lachlan MacKinnon, Times Literary Supplement

"The oratorio . . . carries [its theme] through a series of resourceful modulations to a music-hall finale, setting the Flight into Egypt—'the Land of Unlikeness'—against a real-estate development of the Waste Land. The perplexities and strivings of the intellectual, the man with the mirror, are profoundly grasped and impressively orchestrated. . . . Auden, like most intelligent believers, affirms a positive faith by a kind of double negation, a denial of doubt, a questioning of skepticism. He is more adept at burying Caesar than at praising Christ, more anxious for a Messiah than confident in the Revelation.""—Harry Levin, New Republic

"'The Christmas Oratorio' contains very fine passages, is amusing as well as being serious, and . . . has the power in some of the choruses, of bringing to mind the mighty chorales of Bach."—Stephen Spender, Time and Tide