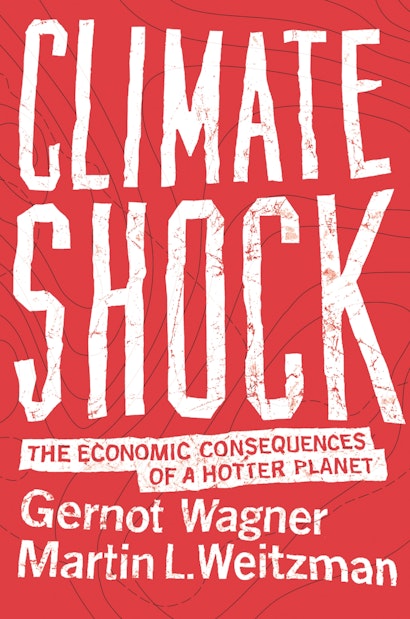 In Climate Shock, Gernot Wagner and Martin Weitzman explore in lively, clear terms the likely repercussions of a hotter planet, drawing on and expanding from work previously unavailable to general audiences. They show that the longer we wait to act, the more likely an extreme event will happen. A city might go underwater. A rogue nation might shoot particles into the Earth’s atmosphere, geoengineering cooler temperatures. Zeroing in on the unknown extreme risks that may yet dwarf all else, the authors look at how economic forces that make sensible climate policies difficult to enact, make radical would-be fixes like geoengineering all the more probable. What we know about climate change is alarming enough. What we don’t know about the extreme risks could be far more dangerous. Wagner and Weitzman help readers understand that we need to think about climate change in the same way that we think about insurance — as a risk management problem, only here on a global scale.

Demonstrating that climate change can and should be dealt with — and what could happen if we don’t do so — Climate Shock tackles the defining environmental and public policy issue of our time.

Gernot Wagner is lead senior economist at the Environmental Defense Fund. He is the author of But Will the Planet Notice? Martin L. Weitzman (1942–2019) was professor of economics at Harvard University. His books include Income, Wealth, and the Maximum Principle. 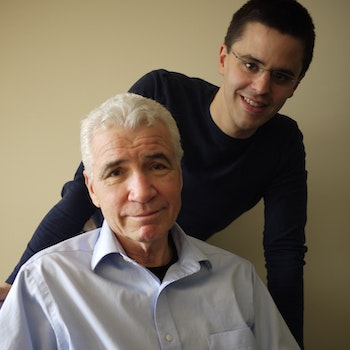 "[Climate Shock] is a witty, far-ranging, and literate set of observations…[I]t is always informed by a deep understanding of the complexities of economics and particularly the difficulties of reaching international environmental agreements."—William D. Nordhaus, New York Review of Books

"Economists Gernot Wagner and Martin Weitzman deliver a high-voltage shock in their analysis of the costs of climate change."—Nature

"[U]seful for policy workers in helping shape dollars-and-cents arguments about the environment and global climate."—Kirkus

"This book represents a synthesis of research and offers a clear-headed look at what must be done."—Toronto Star

"Climate Shock is refreshing in many ways: it starts with a pop quiz, reveals the script of a (possible) new James Bond film and gives you the solution to climate change on page 23. That should be enough to entice a broad readership. However, the book's true value lies elsewhere, in the authors' ability to present a complex and multifaceted topic in plain, simple terms. They challenge assumptions and don't shy away from a clear call for action."—Swenja Surminski, Times Higher Education

"For the intelligent lay reader wanting a lively, lucid assessment of the economic consequences of global warming. . . . [W]ell worth reading."—Pilita Clark, Financial Times

"[A] sobering wake-up call . . . In my mind, this book should be required reading for any policymaker. The world might actually make some real progress, then."—Tibi Puiu, ZME Science

"In Wagner and Weitzman's new book, they present a well written analysis of the tradeoffs we collectively face as we unintentionally unleash climate change. They argue that a risk averse person or nation should buy insurance to protect itself—especially when the losses from climate change are ambiguous and fat tail risk could be huge. The book is well argued and I highly recommend it. The economic approach to discussing climate change offers a new prospective relative to the issues that climate scientists focus on."—Matthew E. Kahn, Green Economics

"[A] welcome new addition to the growing library of depressing but important books about climate change."—Tom Watson, Real Change News

"[Climate Shock] delivers a brief but thorough look at the changing climate from economists' perspective, comparing global warming with other risks and dangers that humanity faces. . . . [T]he book does serve as a call to arms for business owners and leaders, economists, and policymakers who have been searching for a purely rational, finance-focused take on climate change."—Katie Fehrenbacher, Strategy + Business

"Climate Shock should shift our narrative on climate change. . . . Wagner and Weitzman have some policy recommendations, including electricity-grid reform and higher gas taxes. But the real power of their book is its explanation of the right way to think about climate change. Do we really want to take an 11 percent gamble with the planet?"—Peter Orszag, Bloomberg View

"Climate Shock is an authoritative call to arms for tackling the defining environmental and public policy issue of our time."—LSE

"[A] lively and thought-provoking book."—Financial Times

"Climate Shock could have reasonably been called But Will the People Notice? It's a layperson's survey of climate economics, a field that includes cost-benefit analysis and other economic research on climate change impacts and climate change policies. . . . Beyond just being mathematically accessible—an accomplishment in itself—Climate Shock is an unconventional book that takes risks in an effort to connect with audiences who might otherwise turn away."—Yoram Bauman, Reports of the National Center for Science Education

"Overflowing with analytical insights and simple suggestions to transform the way we live and manage ourselves."—Deccan Herald

"A brilliant analysis of the fragility of our debt-fuelled economies."—Martin Wolf, Financial Times

"Economists Gernot Wagner and Martin Weitzman deliver a stinging slap to the reluctant or somnolent negotiator."—Barbara Kiser, Nature.com's A View from the Bridge blog

"Climate Shock: The Economic Consequences of a Hotter Planet by Gernot Wagner and Martin Weitzman comes into its own here, emphasizing the centrality of uncertainty and the role of climate policy as planetary risk management. The authors are very good at arguing that uncertainty is not an excuse for doing nothing or for a wait-and-see policy."—Geoff Heal, Journal of Economic Literature

"Climate Shock: The Economic Consequences of a Hotter Planet does a great job of setting out the case for action on climate."—Geoffrey Heal, Journal of Economic Literature

"Gernot Wagner and Martin Weitzman explore in lively, clear terms the likely repercussions of a hotter planet . . . Climate Shock tackles the defining environmental and public policy issue of our time."—PolitCommerce

"A remarkable book on climate change, Climate Shock is deeply insightful, challenging, eye-opening, thought-provoking, and sheer fun to read. It will help you to think clearly and incisively about one of the most important issues of our generation."—Jeffrey Sachs, author of The Price of Civilization

"Climate Shock is a brilliant, clear, rigorous, and to-the-point account of the problem of climate change and what we can and should do about it. The book's approach to risk—which factors in deep uncertainties—is vastly more sophisticated than the standard methods. An outstanding book."—Nassim Nicholas Taleb, author of The Black Swan and Antifragile

"The recent financial crisis was largely the result of an economy set up to privatize benefits and socialize costs. The same holds true for the climate crisis. Let's avoid doing to the planet what we did to the economy, and let's begin by taking the economics of climate change seriously. Climate Shock shows conclusively how bad the problem truly is and how we can fix it."—Van Jones, founder and president of Green for All and author of The Green Collar Economy

"Think climate change is a low-priority problem? Something to put off while we deal with more immediate threats? Then Climate Shock will open your eyes. Leading economists Wagner and Weitzman explain, in simple, understandable terms, why we face an existential threat in human-caused climate change. The authors lay out the case for taking out a planetary insurance policy, without delay, in the form of market mechanisms aimed at keeping carbon emissions below dangerous levels."—Michael E. Mann, author of The Hockey Stick and the Climate Wars

"Cutting through the fog of excuses, obfuscation, and misguided solutions, Climate Shock takes a clear look at the risks and dangers of inaction on climate change. Wagner and Weitzman show the urgent need for fact-based, rational analysis of big environmental challenges so that we can move forward in the quickest and most practical way possible."—Mark R. Tercek, president and CEO of the Nature Conservancy and author of Nature's Fortune

"Wagner and Weitzman's Climate Shock explores two of the most alarming risks from climate change: unpredictable catastrophes and the all-too-foreseeable human tampering with the environment. They explain how the same political barriers to addressing the problem will leave nations racing to deflect the damage through geoengineering. For anyone interested in the new risk landscape of our changing climate, Climate Shock is a compelling and highly recommended read."—Ian Bremmer, president of the Eurasia Group

"In this clear and engaging exegesis on the risks from global warming, Wagner and Weitzman show that our options for avoiding calamity rapidly narrow toward a few unappetizing possibilities if we don't slash carbon emissions comprehensively and fast."—Michael Oppenheimer, Princeton University

"Climate Shock fascinates, infuriates, motivates. It's an illuminating guidebook to how the climate debate will unfold over the coming decade. But first and foremost, it's a call to action. Now."—Fred Krupp, president of the Environmental Defense Fund

"Climate Shock is a clear, well-argued introduction to the economics of climate policy."—David Keith, author of A Case for Climate Engineering

"Do you want to be challenged and stretched? Climate Shock gives broad perspectives and logical tools that will let you think through the threat of climate change on the level of the best minds on this planet."—Peter C. Goldmark Jr., former president of the Rockefeller Foundation and former CEO of the International Herald Tribune

"What happens when one of the world's leading economists who thinks seriously about global climate change gets together with one of the world's top writers about matters environmental and economic? Climate Shock. From the first page to the last, this important, new book is both exceptionally interesting and surprisingly fun. Now, that's shocking!"—Robert N. Stavins, Harvard University

"Climate Shock demolishes the argument made by climate change skeptics for business as usual."—Ted Steinberg, author of Gotham Unbound

"I cannot think of a better team than Wagner and Weitzman to communicate the risks of inaction on climate change. Their unbiased and informative book Climate Shock dives right into the complexities of the issues and explains them clearly. It provides new and invigorating context for readers."—Juan Moreno-Cruz, Georgia Institute of Technology

"Climate Shock looks at the key issues in climate change and climate change policy and recommends what actions readers can take to help prevent devastating outcomes. Wagner and Weitzman don't hold back from explaining complicated topics and their arguments are backed by references from the latest scientific and economic literature. This is by far the most engaging presentation of this topic that I have read."—Kenneth Gillingham, Yale University