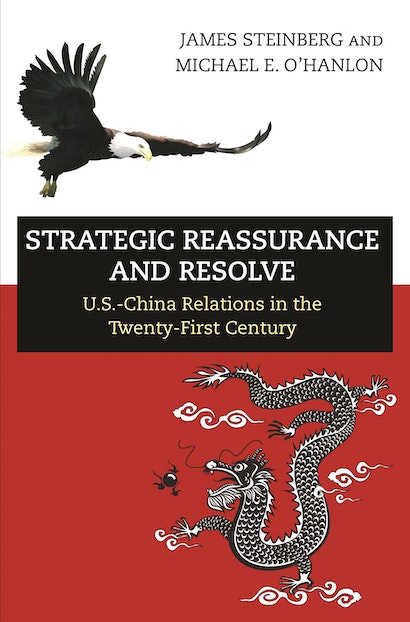 After forty years of largely cooperative Sino-U.S. relations, policymakers, politicians, and pundits on both sides of the Pacific see growing tensions between the United States and China. Some go so far as to predict a future of conflict, driven by the inevitable rivalry between an established and a rising power, and urge their leaders to prepare now for a future showdown. Others argue that the deep economic interdependence between the two countries and the many areas of shared interests will lead to more collaborative relations in the coming decades.

In this book, James Steinberg and Michael O’Hanlon stake out a third, less deterministic position. They argue that there are powerful domestic and international factors, especially in the military and security realms, that could well push the bilateral relationship toward an arms race and confrontation, even though both sides will be far worse off if such a future comes to pass. They contend that this pessimistic scenario can be confidently avoided only if China and the United States adopt deliberate policies designed to address the security dilemma that besets the relationship between a rising and an established power. The authors propose a set of policy proposals to achieve a sustainable, relatively cooperative relationship between the two nations, based on the concept of providing mutual strategic reassurance in such key areas as nuclear weapons and missile defense, space and cyber operations, and military basing and deployments, while also demonstrating strategic resolve to protect vital national interests, including, in the case of the United States, its commitments to regional allies.

James Steinberg is dean of the Maxwell School of Citizenship and Public Affairs and professor of social science, international affairs, and law at Syracuse University, and former deputy secretary of state in the Obama administration. His books include An Ever Closer Union. Michael E. O'Hanlon is a senior fellow at the Brookings Institution who specializes in national security policy. His books include The Science of War (Princeton). Steinberg and O'Hanlon are the authors of Protecting the American Homeland.

"Strategic Reassurance and Resolve furnishes an important and wide-ranging toolkit to keep the conversation between the U.S. and China going."—Ali Wyne, Wall Street Journal

"[T]he points Steinberg and O'Hanlon make deserve the attention of all readers interested in the connection between U.S. and China going forward."—Publishers Weekly

"[S]cholarly as well as accessible, marking out the potential points of conflict while avoiding the glib certainties of much commentary on the implications of China's rise. What sets this book apart, however, is its intelligent effort to chart a feasible path for the relationship that could prevent inevitable competition hardening into unavoidable conflict. . . . If policy makers on either side of the Pacific are looking for a handbook—and they should be—Steinberg and O'Hanlon have written one."—Philip Stephens, Financial Times

"Steinberg and O'Hanlon offer a realistic assessment of the challenges ahead in the US-China relationship. . . . Ultimately, Steinberg and O'Hanlon's great contribution is in laying out a nuanced, yet clear-eyed plan to reduce the risk of great power conflict in the 21st century's most consequential bilateral relationship. As the authors themselves argue, the United States' and China's long-term intentions are unknown, unknowable, and dynamic. But if there exists an approach to avoiding dangerous rivalry and promoting stability in spite of this, it is Strategic Reassurance and Resolve."—Mira Rapp-Hooper, National Interest

"This book is for those who want a thorough explanation of the security, defense, and strategic issues facing China and the U.S."—South China Morning Post

"[T]his readable title is a must for anyone interested in U.S. foreign policy and U.S.-China relations."—Library Journal

"The United States and China are locked in an increasingly intense strategic rivalry. In their thought-provoking new book, Steinberg and O'Hanlon seek ways to prevent this competition from spiraling out of control. While acknowledging the obstacles and potential risks, the authors offer concrete proposals aimed at promoting transparency, restraint, and stability. Their ideas deserve to be discussed and debated, in Beijing as well as Washington."—Aaron L. Friedberg, Princeton University

"A highly informed and realistic analysis of U.S.-China relations that avoids premature fatalism and Pollyannish optimism. It offers a bold strategy based on developing a common framework of cooperation benefiting both countries while still standing up for American interests and allies. The authors further undertake the hard work of offering concrete examples of where such cooperative opportunities might be found. A must-read for anyone interested in the future of U.S.-China relations."—Stephen J. Hadley, former national security advisor to President George W. Bush

"This excellent book makes an elegant statement on the stakes involved in achieving strategic coexistence between the established power, the United States, and the rising power, China. The authors provide a specific set of guidelines for avoiding unnecessary competition."—Patrick M. Cronin, Center for a New American Security

"Strategic Reassurance and Resolve argues that major armed conflict between the United States and China is far from inevitable and moreover, that concrete steps can be taken to avoid such an outcome. Offering numerous recommendations and proposals, this effectively organized and well-written book offers an important contribution to the debate on China's rise and U.S. policy."—M. Taylor Fravel, author of Strong Borders, Secure Nation