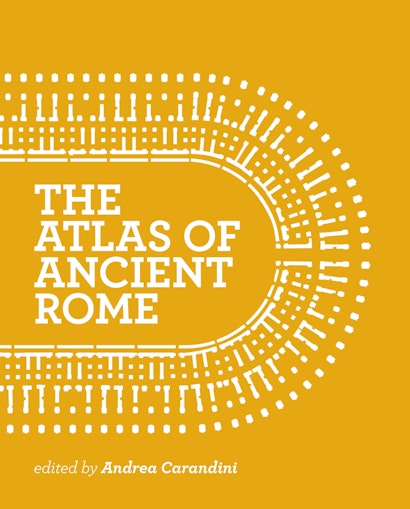 The Atlas of Ancient Rome provides a comprehensive archaeological survey of the city of Rome from prehistory to the early medieval period. Lavishly illustrated throughout with full-color maps, drawings, photos, and 3D reconstructions, this magnificent two-volume slipcased edition features the latest discoveries and scholarship, with new descriptions of more than 500 monuments, including the Sanctuary of Vesta, the domus Augusti, and the Mausoleum of Augustus. It is destined to become the standard reference for scholars, students, and anyone interested in the history of the city of Rome.

The Atlas of Ancient Rome is monumental in scope. It examines the city’s topography and political-administrative divisions, trade and economic production, and social landscape and infrastructure—from residential neighborhoods and gardens to walls, roads, aqueducts, and sewers. It describes the fourteen regions of Rome and the urban history of each in unprecedented detail, and includes profiles and reconstructions of major monuments and works of art. This is the only atlas of the ancient city to incorporate the most current archaeological findings and use the latest mapping technologies.

Authoritative and easy to use, The Atlas of Ancient Rome is the definitive illustrated reference book on Rome from its origins to the sixth century AD.

Andrea Carandini is professor emeritus of archaeology at La Sapienza University of Rome. He has supervised some of the most important archaeological excavations in Rome and was instrumental in the discovery of the ancient Palatine Wall and the earliest phase of the Sanctuary of Vesta. He is president of the Italian National Trust. His many books include Rome: Day One (Princeton).

"An extraordinarily ambitious survey. . . . The amount of material, visual, descriptive and bibliographic included in its two volumes and hundreds of illustrations and maps is astonishing. There is nowhere else that all this information is collected in one place, at least in English. The Atlas is up to date and a remarkable display of the latest cartographic technology."—Nicholas Purcell, Times Literary Supplement

"An original and remarkably complete portrait . . . give[s] a marvellous picture of the evolution, complexity, and decline of the ancient city."—James E. Packer, Journal of Roman Archaeology

"These two superb volumes constitute a major contribution to topographical studies of ancient Rome. . . . The great value of this atlas is in its bringing together a modern, updated, holistic view of the topography of ancient Rome—arguably one of the most important cities of Western civilization. This set will remain an invaluable reference resource for many years to come, suitable not only for scholarly research but also for the enjoyment of readers at all levels."—Choice

"A remarkable achievement. . . . Its rigor and comprehensiveness make it an important addition for institutions that collect in this subject area. With the significant revisions to the 2011 material (Carandini's preface outlines substantial updates, incorporating research as recent as 2015), this is true even for collections that already have the Italian edition."—ARLIS

"One of the most beautiful academic books I have ever seen, making an enormous visual contribution to the historical study of Roman topography and architecture. . . . It is meticulously produced and packed with rich visual and verbal information . . . a monumental piece of scholarship."—Matthew Nicholls, History Today

"There is a wealth of information to be gleaned from the well-researched and thorough text, but the second volume (Tables and Indexes) is an impressive and worthwhile tome in its own right."—Current World Archaeology

"The AAR is a significant achievement which brings together a vast amount of information. It is an important resource for those working on Roman topography or interested in the history of the city."—Christopher Siwicki, Journal of Roman Studies

"This two-volume work is a magnificent achievement. The Atlas of Ancient Rome will prove essential from now on for all study of the city of Rome."—Andrew Wallace-Hadrill, author of Rome's Cultural Revolution

Table of Contents
Introduction
Chapter - Other