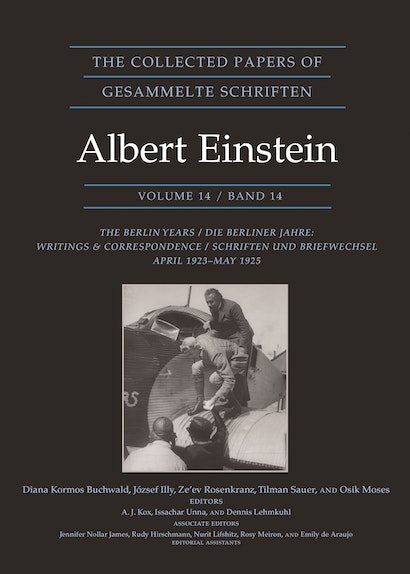 The more than one thousand letters and several dozen writings included in this volume cover the years immediately before the final formulation of new quantum mechanics. The discovery of the Compton effect in 1923 vindicates Einstein’s light quantum hypothesis. Niels Bohr still criticizes Einstein’s conception of light quanta and advances an alternative theory, but Walther Bothe and Hans Geiger perform a difficult experiment that decides in favor of Einstein’s theory. At the same time, Satyendranath Bose sends a new quantum theoretical derivation of Planck’s law to Einstein and he discovers what is now known as Bose-Einstein condensation. Einstein attempts to reformulate a unified theory of the gravitational and electromagnetic fields.

In early November 1923, Einstein flees overnight to the Netherlands in the wake of threats on his life and anti-Semitic rioting in Berlin. He rejoins the International Committee on Intellectual Cooperation in June 1924, and supports the idea of a European union. He joins the board of governors of Hebrew University, which opens in April 1925, and celebrates the event in Buenos Aires while on a seven-week lecture tour of Argentina, Uruguay, and Brazil. During this period, he delivers lectures, meets with heads of state, visits major institutions, and attends receptions hosted by the local Jewish and German communities. He has a serious, but short-lived, falling out with his son Hans Albert and his first wife Mileva Maric-Einstein over how to invest part of the Nobel Prize money and he rescues his sister Maja and her husband from debt on their house. Einstein has a fourteen-month romantic relationship with his secretary, Betty Neumann, which he ends in October 1924.

At the California Institute of Technology, Diana Kormos Buchwald is professor of history; József Illy, Ze'ev Rosenkranz, and Tilman Sauer are editors and senior researchers in history; and Osik Moses is associate editor.