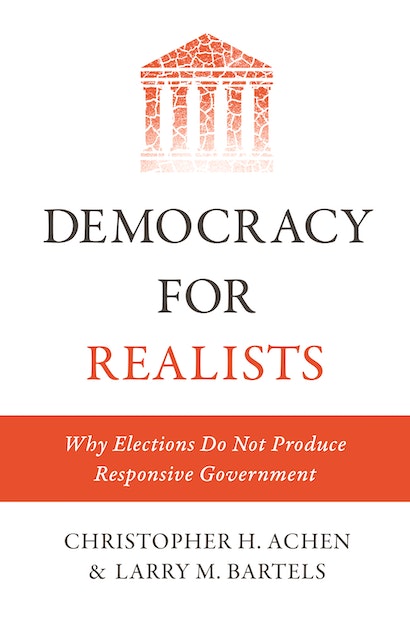 Achen and Bartels argue that democratic theory needs to be founded on identity groups and political parties, not on the preferences of individual voters. Democracy for Realists provides a powerful challenge to conventional thinking, pointing the way toward a fundamentally different understanding of the realities and potential of democratic government.

"It flies in the face of decades of political science conventional wisdom about 'the rational voter' and other such dicta (what the authors call the 'folk theory' of democracy), but it seems to me obviously true, particularly in our age."—Michael Tomasky, New York Review of Books

"This more than erudite book couldn't have been published at a more apt, if not fractious climate amid modern British and European political history. . . . Democracy for Realists will set minds thinking and trigger an array of debate; which, at the end of the day, is what democracy is all about."—David Marx Book Reviews

"Democracy for Realists, which [I've] become a bit obsessed with . . . is the political science equivalent of being told Santa doesn’t exist."—Ezra Klein, Vox

"The authors—two of the world's most prominent and celebrated political scientists—distil an entire career’s worth of learning into a single book."—Peter Carrol, LSE Review of Books

"Democracy for Realists is a monumental work whose ripple effect will resonate within and beyond the field for years to come. It succeeds even when one's unsure of its claims. That’s the hallmark of a classic."—Neil Roberts, Perspectives on Politics

"The most influential recent book on voting."—John Prideaux, Economist

"[Achen and Bartels] do an especially fine job with their analyses of retrospective voting and identity politics, making a noteworthy contribution to the theory of voting behavior, and their book would be a good choice for undergraduate or graduate courses as an introduction to the political science literature on voting behavior."—Tim Cox, The Independent Review

"Given the breadth, depth, and relevance of the book, it is likely to become a deservingly influential study of democracy."—Joshua Matti, Review of Regional Studies