Why we need to stop wasting public funds on education 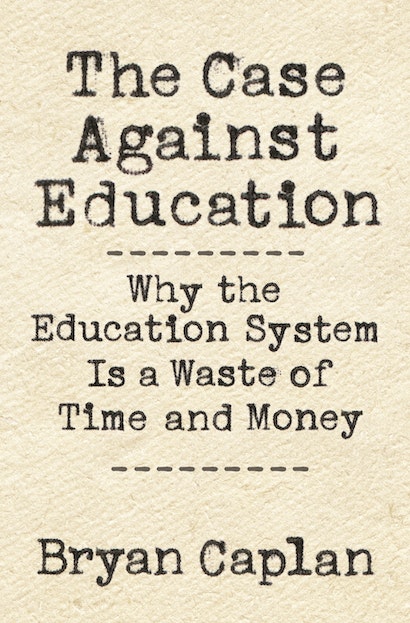 Despite being immensely popular — and immensely lucrative—education is grossly overrated. In this explosive book, Bryan Caplan argues that the primary function of education is not to enhance students’ skill but to certify their intelligence, work ethic, and conformity—in other words, to signal the qualities of a good employee. Learn why students hunt for easy As and casually forget most of what they learn after the final exam, why decades of growing access to education have not resulted in better jobs for the average worker but instead in runaway credential inflation, how employers reward workers for costly schooling they rarely if ever use, and why cutting education spending is the best remedy.

Caplan draws on the latest social science to show how the labor market values grades over knowledge, and why the more education your rivals have, the more you need to impress employers. He explains why graduation is our society’s top conformity signal, and why even the most useless degrees can certify employability. He advocates two major policy responses. The first is educational austerity. Government needs to sharply cut education funding to curb this wasteful rat race. The second is more vocational education, because practical skills are more socially valuable than teaching students how to outshine their peers.

Romantic notions about education being “good for the soul” must yield to careful research and common sense—The Case against Education points the way.

Bryan Caplan is professor of economics at George Mason University and a blogger at EconLog. He is the author of Selfish Reasons to Have More Kids: Why Being a Great Parent Is Less Work and More Fun than You Think and The Myth of the Rational Voter: Why Democracies Choose Bad Policies (Princeton). He lives in Oakton, Virginia.

"Bryan Caplan raises an important question in [his] controversial new book, The Case Against Education. How much of the benefits of a degree comes from the skills you acquire in studying for it? And how much from the piece of paper at the end – what your degree certificate signals to employers about the skills and attributes you might have had long before you filled in a unviersity application form?"—Sonia Sodha, The Guardian

"Would-be students and their parents are rethinking the assumption that a good life is impossible without an expensive degree—not to mention the chase for college admission that begins at kindergarten if not before. [This new book] may help to let out a little more air."—Naomi Schaefer Riley, Wall Street Journal

"You probably won’t agree with everything he says . . . but his broadside is worth considering carefully given that the U.S. spends $1 trillion or so a year on education at all levels, more than the budget for defense."—Peter Coy, Bloomberg Businessweek

"It is an excellent book, on an important topic. Beyond such cheap talk, I offer the costly signal of having based an entire chapter of our new book on his book. That’s how good and important I think it is. . . . Caplan offers plausible evidence that school functions to let students show employers that they are smart, conscientious, and conformist. And surely this is in fact a big part of what is going on."—Robin Hanson, Overcoming Bias

"A book that America has needed for a long time. If we ever reach a turning point where most of us reject the idea that government should mandate and subsidize certain kinds of education, Bryan Caplan will have a lot to do with it."—George Leef, Forbes

"Economist Bryan Caplan of George Mason University has crunched the data for years from every angle and argues devastatingly . . . that college is, for many of those who go there, a boondoggle."—Kyle Smith, National Review Online

"It's like the case against parenting's role in shaping children: I don't want to believe it, but the data force you take it seriously. Good book."—Charles Murray

"Like most fascinating authors, Caplan, too, has scrumptious contradictions. . . . Whatever the truth is, this book is recommended to parents, high school teachers, and college professors for gaining valuable insights into the dynamics of ‘useless’ education."—L. Ali Khan, NY Journal of Books

"[Caplan] is also frequently infuriating. But when he is right, he is very right. The Case Against Education, a book 10 years in the making, is a case of Caplan being right."—Charles Fain Lehman, Washington Free Beacon

"The Case Against Education lays the groundwork for readers to think anew about education, what it does and ought to do, what place it holds and ought to hold in American society. It ought to be a wake-up call for all Americans, especially those who seek to champion ‘education’ without explaining why it’s a worthy cause."—Ian Lindquis, The Weekly Standard

"His words might be hard to digest. But with dismal school performance and achievement year after year, it’s worth challenging the assumptions we make about the education systems that now envelop childhood."—Kaitlyn Buss, Detroit News

"The Case Against Education is a brilliant book that you should read, though you’ll probably reject its conclusions without really considering them."—Jake Seliger

"[Caplan’s] evidence, trends and intuition suggest he has an important point."—Ryan Bourne, The Telegraph

"Bryan Caplan is perhaps the most natural ‘social science book writer’ I have met, besides myself of course. Not only does he want people to agree with him, he insists that they agree with him for the right reasons."—Tyler Cowen, Marginal Revolution

"The Case Against Education is powerfully argued, provocative but not polemical, marrying a wealth of evidence with an engaging writing style. . . . After 300 pages, Caplan's outlandish proposals seem not just plausible but natural conclusions, whether or not you share his ideological commitments."—Aveek Bhattacharya, London School of Economics Review of Books

"A persuasive indictment of his own industry."—Gene Epstein, City Journal

"I’m not sure he’s right, especially about education being almost entirely for the purpose of signaling, but goodness does he make a strong case. Agree with him or not, you’ll never look at the schools and colleges in quite the same way."—Stephen L. Carter, Bloomberg Opinion

"Few would disagree that our education system needs reform. While most call for more—more government subsidies, more time in school, more students attending college—Caplan provocatively argues for less. The Case against Education urges a radical rethinking about why we've been unsuccessful to date—and why more of the same won't work."—Vicki Alger, Independent Institute

"Bryan Caplan has written what is sure to be one of the most intriguing and provocative books on education published this year. His boldly contrarian conclusion—that much schooling and public support for education is astonishingly wasteful, if not counterproductive—is compelling enough that it should be cause for serious reflection on the part of parents, students, educators, advocates, and policymakers."—Frederick Hess, American Enterprise Institute

"You doubtless asked many times in school, ‘When am I going to use this?' Bryan Caplan asks the same question, about everything taught prekindergarten through graduate school, and has a disturbing answer: almost never. Indeed, we'd be better off with a lot less education. It's heresy that must be heard."—Neal McCluskey, Cato Institute

"The Case against Education is a riveting book. Bryan Caplan, the foremost whistle-blower in the academy, argues persuasively that learning about completely arbitrary subjects is attractive to employers because it signals students' intelligence, work ethic, desire to please, and conformity—even when such learning conveys no cognitive advantage or increase in human capital."—Stephen J. Ceci, Cornell University

"This book is hugely important. The Case against Education is the work of an idiosyncratic genius."—Lant Pritchett, author of The Rebirth of Education: Schooling Ain't Learning

"Caplan deals provocatively and even courageously with an important topic. Readers will be disturbed by his conclusions, maybe even angry. But I doubt they will ignore them."—Richard Vedder, author of Going Broke by Degree: Why College Costs Too Much