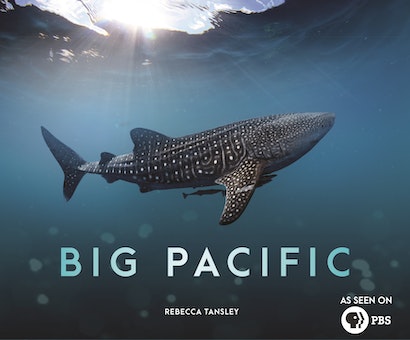 The Pacific Ocean covers one-third of Earth’s surface—more than all of the planet’s landmasses combined. It contains half of the world’s water, hides its deepest places, and is home to some of the most dazzling creatures known to science. The companion book to the spectacular five-part series on PBS produced by Natural History New Zealand, Big Pacific breaks the boundaries between land and sea to present the Pacific Ocean and its inhabitants as you have never seen them before.

Illustrated in full color throughout, Big Pacific blends a wealth of stunning Ultra HD images with spellbinding storytelling to take you into a realm teeming with exotic life rarely witnessed up close—until now. The book is divided into four sections, each one focusing on an aspect of the Pacific. “Passionate Pacific” looks at the private lives of sea creatures, with topics ranging from the mating behaviors of great white sharks to the monogamy of wolf eels, while “Voracious Pacific” covers hunting and feeding. In “Mysterious Pacific,” you will be introduced to the Pacific’s more extraordinary creatures, like the pufferfish and firefly squid, and explore some of the region’s eerier locales, like the turtle tombs of Borneo and the skull caves of Papua New Guinea. “Violent Pacific” examines the effects of events like natural disasters on the development of the Pacific Ocean’s geography and the evolution of its marine life.

Providing an unparalleled look at a diverse range of species, locations, and natural phenomena, Big Pacific is truly an epic excursion to one of the world’s last great frontiers.

Rebecca Tansley is a New Zealand–based writer and director. She has written several internationally published books, and her feature documentary film, Crossing Rachmaninoff, was screened at film festivals throughout the world.
Introduction