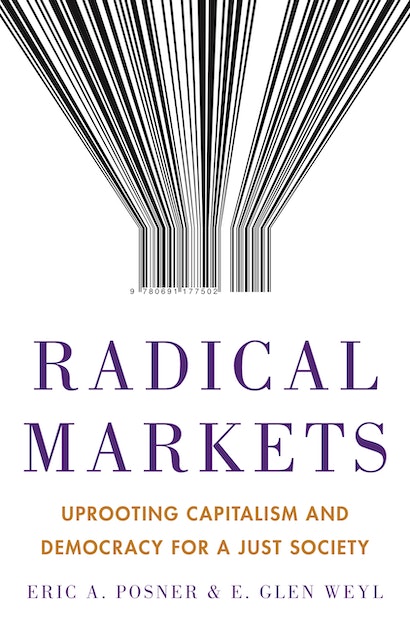 Many blame today’s economic inequality, stagnation, and political instability on the free market. The solution is to rein in the market, right? Radical Markets turns this thinking—and pretty much all conventional thinking about markets, both for and against—on its head. The book reveals bold new ways to organize markets for the good of everyone. It shows how the emancipatory force of genuinely open, free, and competitive markets can reawaken the dormant nineteenth-century spirit of liberal reform and lead to greater equality, prosperity, and cooperation.

Eric Posner and Glen Weyl demonstrate why private property is inherently monopolistic, and how we would all be better off if private ownership were converted into a public auction for public benefit. They show how the principle of one person, one vote inhibits democracy, suggesting instead an ingenious way for voters to effectively influence the issues that matter most to them. They argue that every citizen of a host country should benefit from immigration—not just migrants and their capitalist employers. They propose leveraging antitrust laws to liberate markets from the grip of institutional investors and creating a data labor movement to force digital monopolies to compensate people for their electronic data.

Only by radically expanding the scope of markets can we reduce inequality, restore robust economic growth, and resolve political conflicts. But to do that, we must replace our most sacred institutions with truly free and open competition—Radical Markets shows how.

Eric A. Posner is the Kirkland and Ellis Distinguished Service Professor at the University of Chicago Law School. His many books include The Twilight of Human Rights Law and Climate Change Justice (Princeton). He lives in Chicago. E. Glen Weyl is principal researcher at Microsoft, founder and chairman of RadicalxChange, and visiting research scholar at Princeton University's Woodrow Wilson School of Public and International Affairs. He lives in New Jersey. 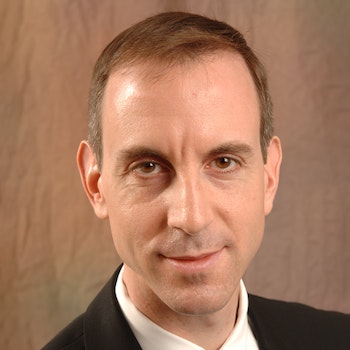 "Both a savage critique of 'techno-feudalism' and an idealistic appeal to share the fruits of our collective intelligence more fairly."—John Thornhill, Financial Times

"Radical Markets . . . could be best described as an interesting new way of looking at the subject that is sometimes called “political economy” - tackling the big questions of how markets and politics and society intersect. . . . I highly recommend Radical Markets . . . to anyone interested in these kinds of issues, and look forward to seeing the discussion that the book generates."—Vitalik Buterin

"Doesn’t anybody have anything new to offer? . . . . [Y]es: . . . unleash the awesome power of markets . . . to uplift the poor . . . it just might be what the world needs now. . . . [Posner and Weyl are] smart and iconoclastic, and their book bursts with ideas like kernels of corn on a hot stove."—Peter Coy, Bloomberg Businessweek

"What I love is just some new ideas, because the existing ideas to solve the injustices and inequalities aren’t working! A must-read."—Carol Massar, Bloomberg Radio

"A very thought-provoking book is a bizarre fusion of ideas drawn from the classical liberal . . . . and socialist tradition(s). . . . It contains ideas . . . that really do make you think. It is a really fun book to read and of you are someone who actually likes having your suppositions and beliefs challenged, take a look at it."—Reihan Salam, National Review's The Editors podcast

"An arresting if eccentric manifesto for rebooting liberalism. . . . Radical Markets is refreshing and welcome in its willingness to question received wisdom."—The Economist

"I highly recommend this book! Replacing markets by auctions (sort of). Whether you agree or not, it shows how much liberalism is able to renew itself."—Gaspard Koenig, Generation Libre

"Read this difficult and provocative book. It made my head hurt, and then spin. In a world where our current economic and political models are worth defending but are straining, this can only be a good thing."—Paschal Donohoe, Irish Times

"It will pay the readers . . . great intellectual returns to invest significant time in studying this book very carefully. It is ambitious and bold, and I think it should excite the imagination and motivate careful scholarship and analytical rigor among both critics and those who want to pursue the line of argument laid out."—Peter Boettke, Coordination Problem

"This system has enormous potential — simple, fair, progressive taxes and a more dynamic economy. It would be much easier to develop new infrastructure, build new homes, buy your neighbour’s garden, and pour concrete all over twee villages to build monorails or airport runways."—Tim Harford, Financial Times

"This is free market thinking but not as we know it."—Diane Coyle, Prospect

"Glen Weyl, coauthor of Radical Markets, is tackling the core issues: What does human dignity mean in a highly automated future? How can we regain agency over the data we produce? If these don’t sound like economic questions, then get ready to encounter the future of economics. We can’t just complain about how tech is transforming our world; we need to invent the transformation."—Jaron Lanier, Wired

"A law professor and an economist argue that the way out of liberalism’s impasse is to expand the role of markets, not to subdue them. . . . Together they point to a possible response to the challenges of populism and protectionism."—The Economist

"Radical Markets is worth reading both for its genuinely innovative suggestions and its well-researched accounts of the development of economic ideas."—David V. Axelsen, Economics and Philosophy

“In 1903, Elizabeth Magie patented the Landlord’s Game, a property-based board game created with two sets of rules: a monopolist set in which the winner took all and an antimonopolist set in which all wealth was shared across society. It is revealing that only the former set of rules took off, giving birth to the bestselling game Monopoly. Radical Markets sketches a vision of how society might look if it adopted Magie’s second set of rules. Unlike playing with Monopoly money, the stakes in this societal game could scarcely be higher, and the importance of this book could scarcely be greater.”—Andrew G. Haldane, chief economist, Bank of England

"I have always been motivated to find ways to unite the power of technology and markets with the goal of creating a more egalitarian society, and the authors of this book offer an exploration of these apparently contradictory strands."—Satya Nadella, Chief Executive Officer, Microsoft

"Perhaps the most ambitious attempt to rethink democracy and markets since Milton Friedman. Twenty years from now this just might be the book people are talking about. The writing is excellent, with great examples and historical detail. I admire the ambition and willingness to experiment, a rare thing in economics these days. It just might help launch a new branch of political economy."—Kenneth S. Rogoff, author of The Curse of Cash

"One of the most exciting books in the social sciences published in the past several years. Very original, using a consistent ideological approach, and intellectually compelling."—Branko Milanovic, author of Global Inequality

"Radical Markets thinks big and builds daring proposals, all on a unified theme: the need for maintaining competition and eliciting decentralized information, whose neglect led to the demise of planned economies. Whether you are convinced by the specific proposals or not, your confidence in your worldview may well be shattered by the depth and originality of the analysis."—Jean Tirole, Toulouse School of Economics, Nobel Laureate in Economics, and author of Economics for the Common Good

"In our difficult times, with mounting anxieties over migration, global inequality, and the cohesiveness of public culture, many are inclined to reject market-based solutions as heartless and elitist. Eric Posner and Glen Weyl argue that market-based ideas of a radically new sort (though based on neglected insights from the past) have the power to create greater equality and reciprocity. Counterintuitive and fascinating, this book will be an essential part of the debate about global issues going forward."—Martha C. Nussbaum, University of Chicago