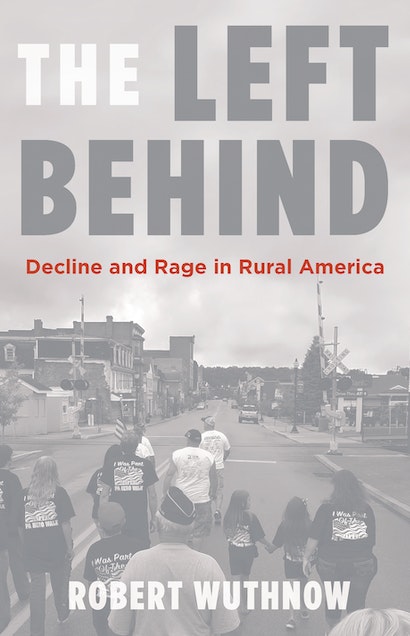 What is fueling rural America’s outrage toward the federal government? Why did rural Americans vote overwhelmingly for Donald Trump? And, beyond economic and demographic decline, is there a more nuanced explanation for the growing rural-urban divide? Drawing on more than a decade of research and hundreds of interviews, Robert Wuthnow brings us into America’s small towns, farms, and rural communities to paint a rich portrait of the moral order — the interactions, loyalties, obligations, and identities—underpinning this critical segment of the nation. Wuthnow demonstrates that to truly understand rural Americans’ anger, their culture must be explored more fully.

We hear from farmers who want government out of their business, factory workers who believe in working hard to support their families, town managers who find the federal government unresponsive to their communities’ needs, and clergy who say the moral climate is being undermined. Wuthnow argues that rural America’s fury stems less from specific economic concerns than from the perception that Washington is distant from and yet threatening to the social fabric of small towns. Rural dwellers are especially troubled by Washington’s seeming lack of empathy for such small-town norms as personal responsibility, frugality, cooperation, and common sense. Wuthnow also shows that while these communities may not be as discriminatory as critics claim, racism and misogyny remain embedded in rural patterns of life.

Moving beyond simplistic depictions of the residents of America’s heartland, The Left Behind offers a clearer picture of how this important population will influence the nation’s political future.

Robert Wuthnow is the Gerhard R. Andlinger '52 Professor of Social Sciences at Princeton University. His many books include American Misfits and the Making of Middle-Class Respectability, Small-Town America, and Remaking the Heartland (all Princeton).

"Writing with empathy . . . the author reflects on the factors shaping rural life—from the importance of faith to the stability and familiarity of life in town to the importance of ritual events (barn dances, etc.), stories, and symbols—as well as pressing problems (brain drain, teen pregnancy, drugs, lack of good jobs) and concerns over moral decline (abortion and homosexuality). Wuthnow finds nuances: the isolation-ending benefits of the internet, Walmart, and 24/7 cable news have made rural residents more aware that the world 'was changing and leaving them behind.' His interviews are consistently revealing. . . . A superb, authoritative sociology book."—Kirkus

"Mr. Wuthnow has conducted one of the deepest, most intimate examinations of small-town life ever undertaken."—David Shribman, The Globe and Mail

"Thanks to Wuthnow’s rich observations, we are able to address and understand what truly confronts us as a nation: the triumph of mass society through mass politics in the name of the 'little guy.' Little did we know that such a person would also have the hands to match."—L. Benjamin Rolsky, Los Angeles Review of Books

"Wuthnow cogently confronts the question: Why are so many of the people living in small-town America filled with rage? Instead of condemning, he listens. In this highly accessible, instructive book, Wuthnow reminds readers why the so-called American Dream is closely connected to the politics of place."—Nancy Isenberg, author of White Trash: The 400-Year Untold History of Class in America

"Analytical and humane, this account of the dense, vexed moral communities of rural America is based on profound fieldwork conducted over the course of a decade by one of our most accomplished sociologists. Conveying the anxieties and resentments that run deep in stressed but resilient small-town America, Wuthnow's appraisal of ethical sensibilities, patterns and limits of membership, and political orientations is learned, engrossing, and timely."—Ira Katznelson, author of Fear Itself: The New Deal and the Origins of Our Time

"Distilling an impressive body of research, this book describes the core characteristics of rural moral communities and brings important conceptualizations of rural life to audiences that may not have previously encountered them. Given the contemporary political environment, The Left Behind is a timely contribution."—Colin Jerolmack, New York University

"Wuthnow draws on his trove of primary source interviews and observations in small-town America, and a wealth of other materials, to effectively describe how the social fabric and moral tenors of small towns are changing. This thoughtful and effective book serves as a corrective to the caricatures of small-town America and is an important resource for our shared future."—Courtney Bender, Columbia University