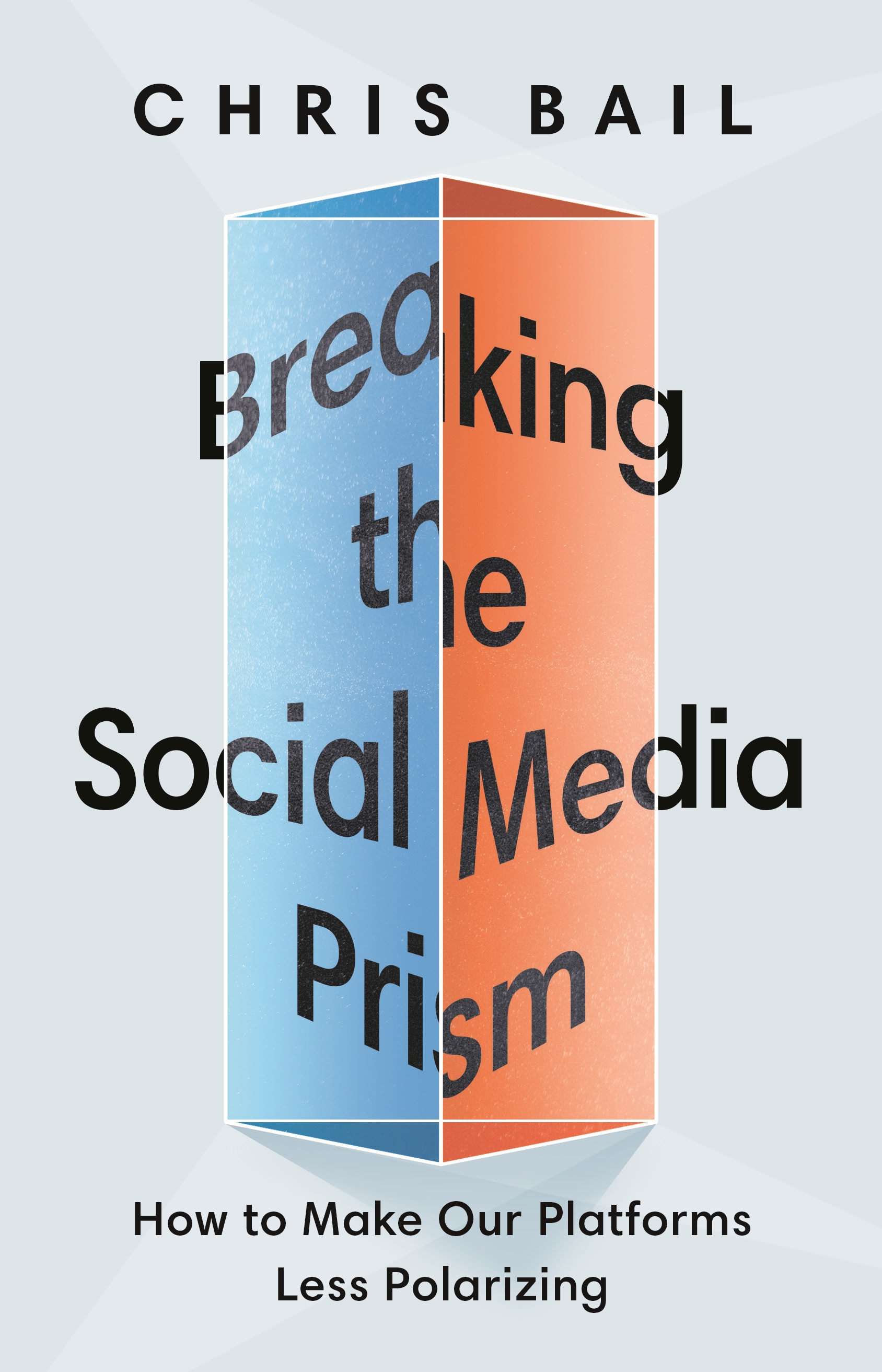 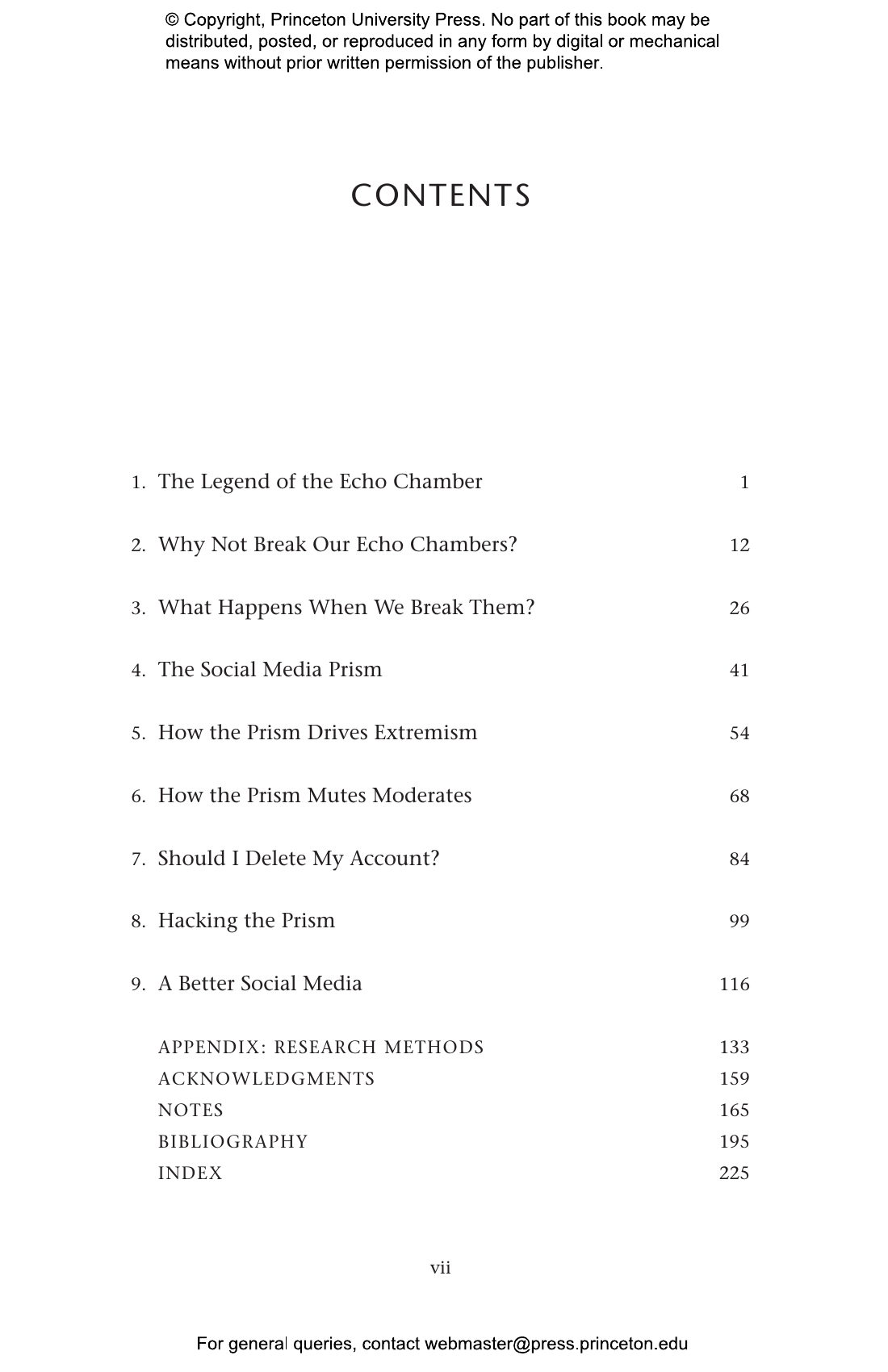 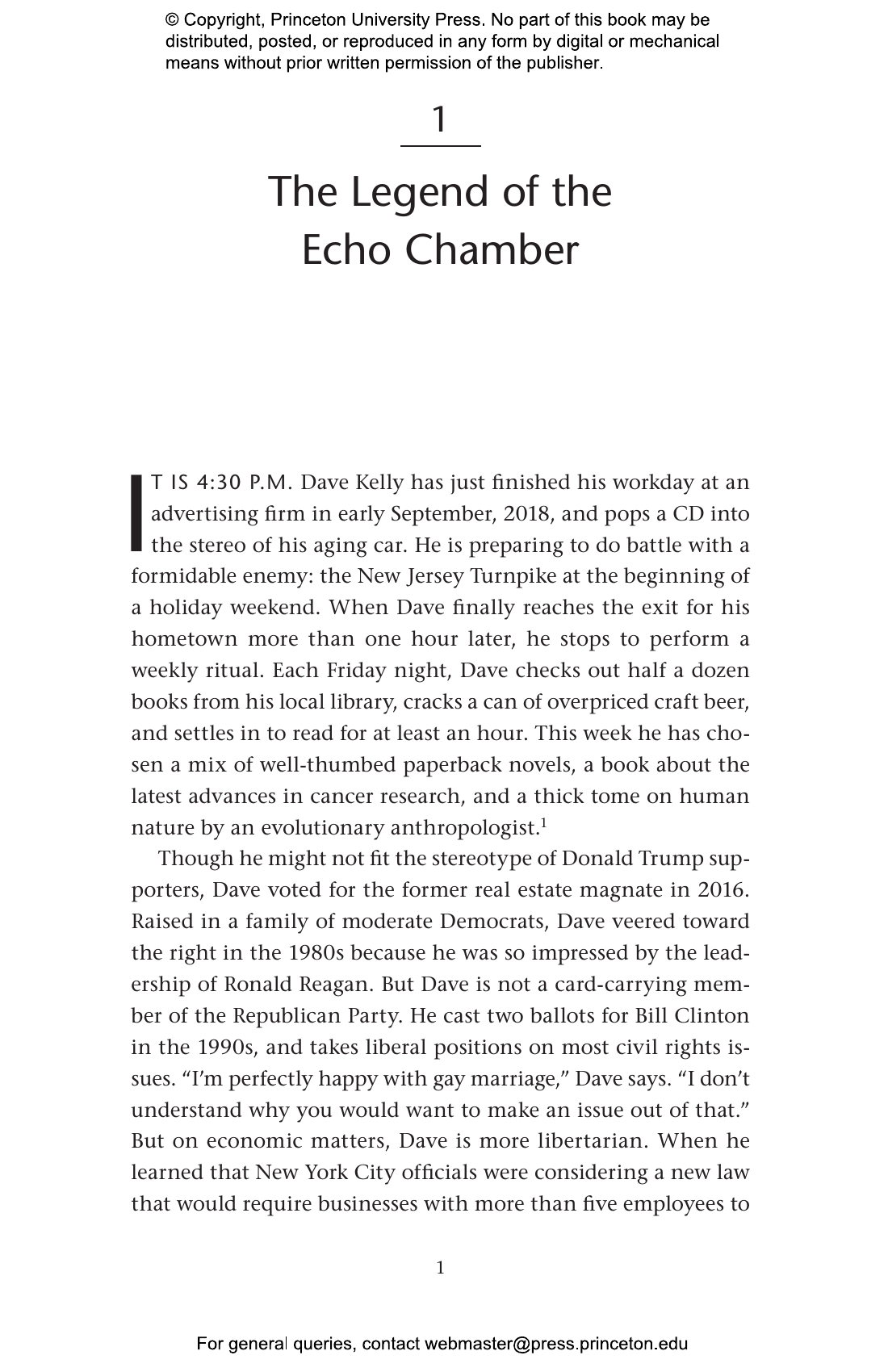 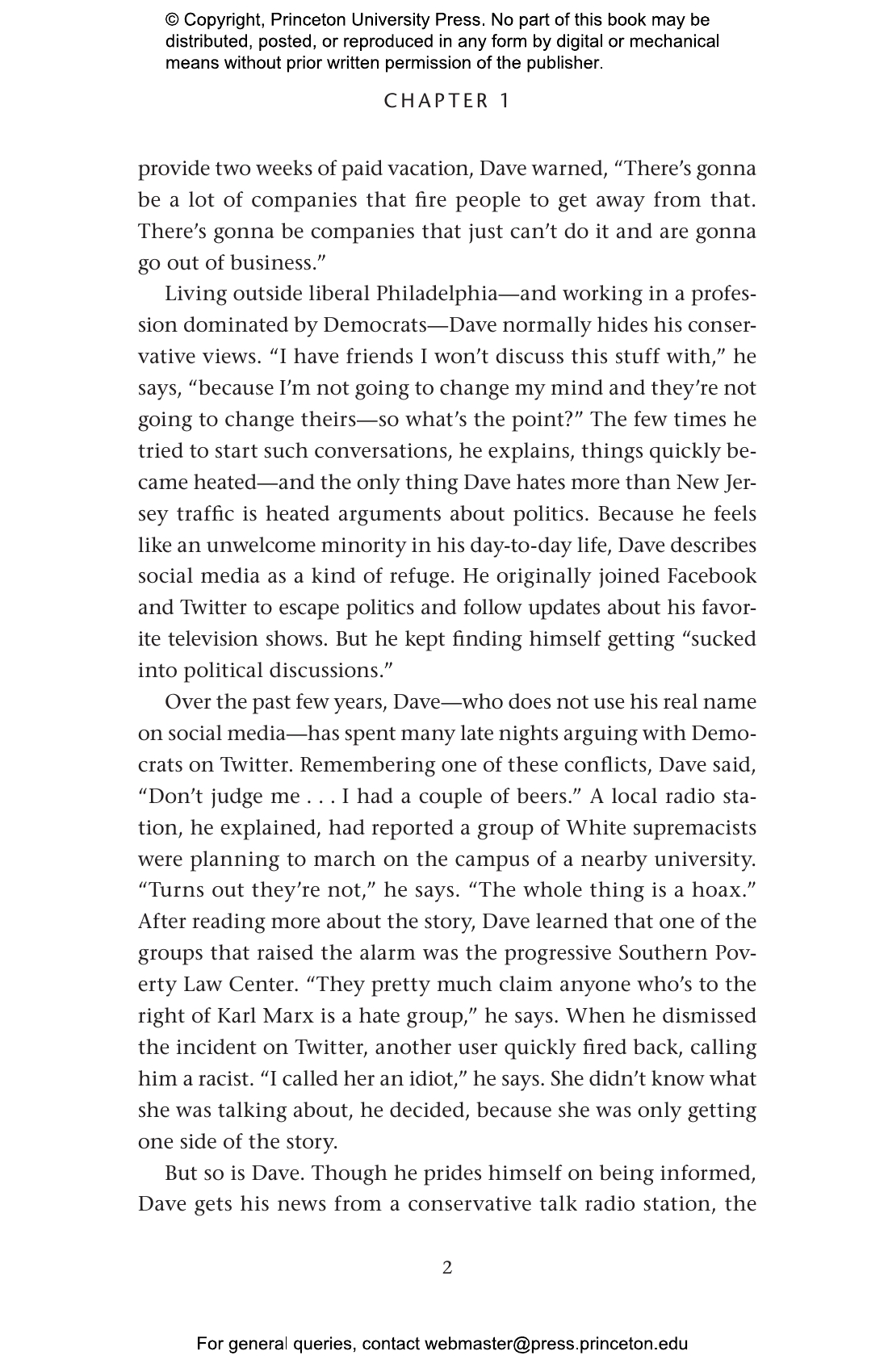 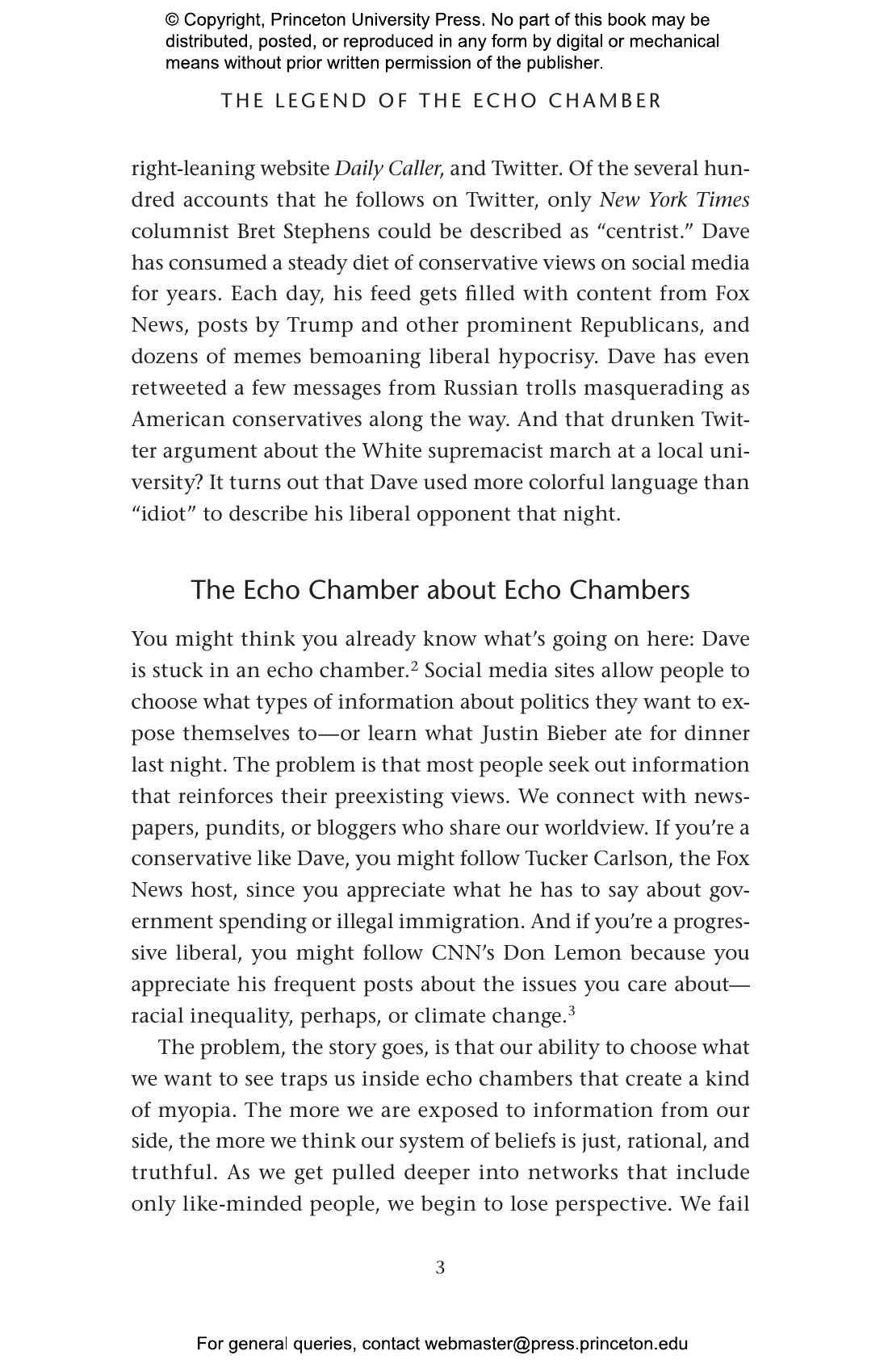 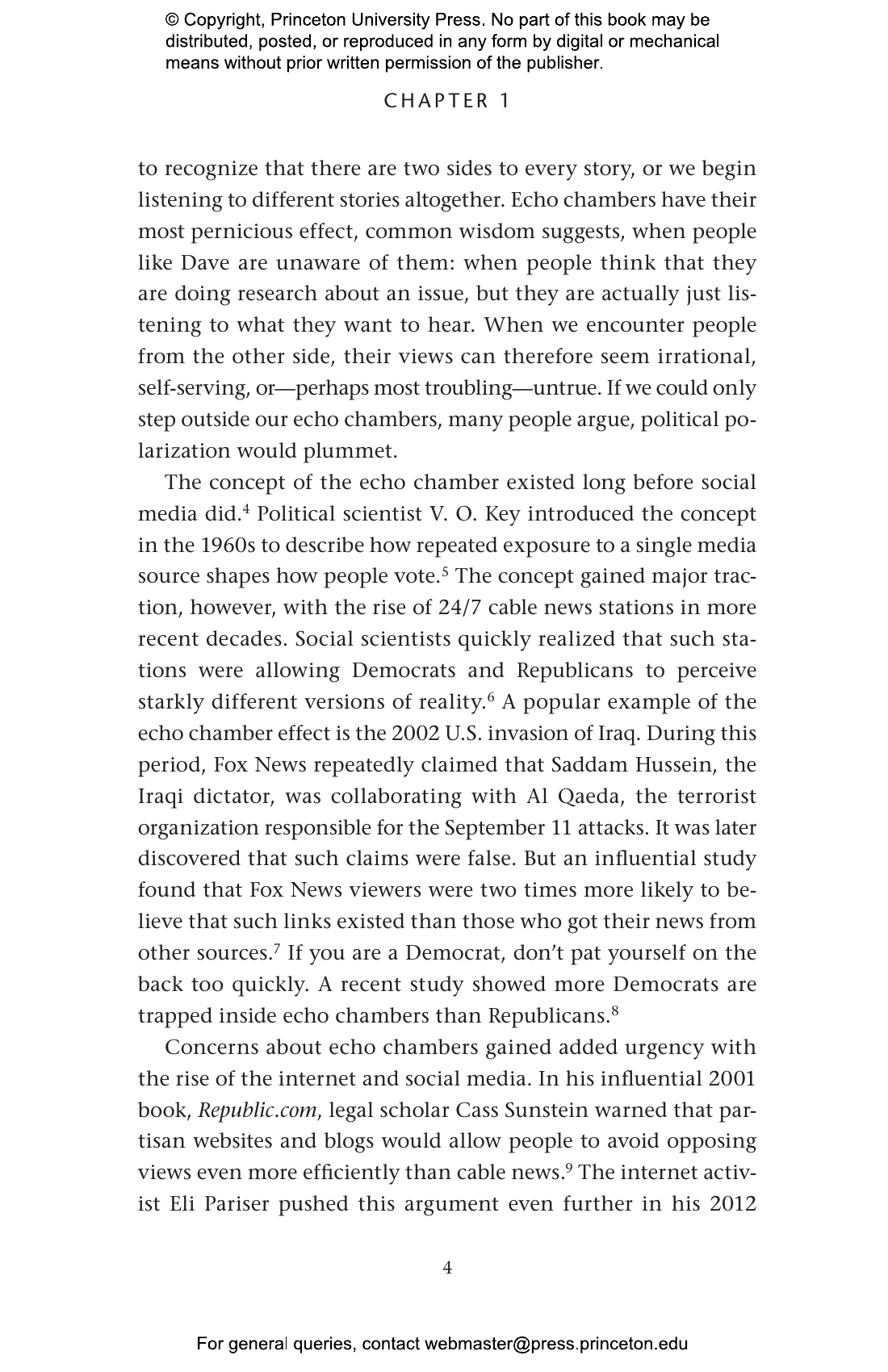 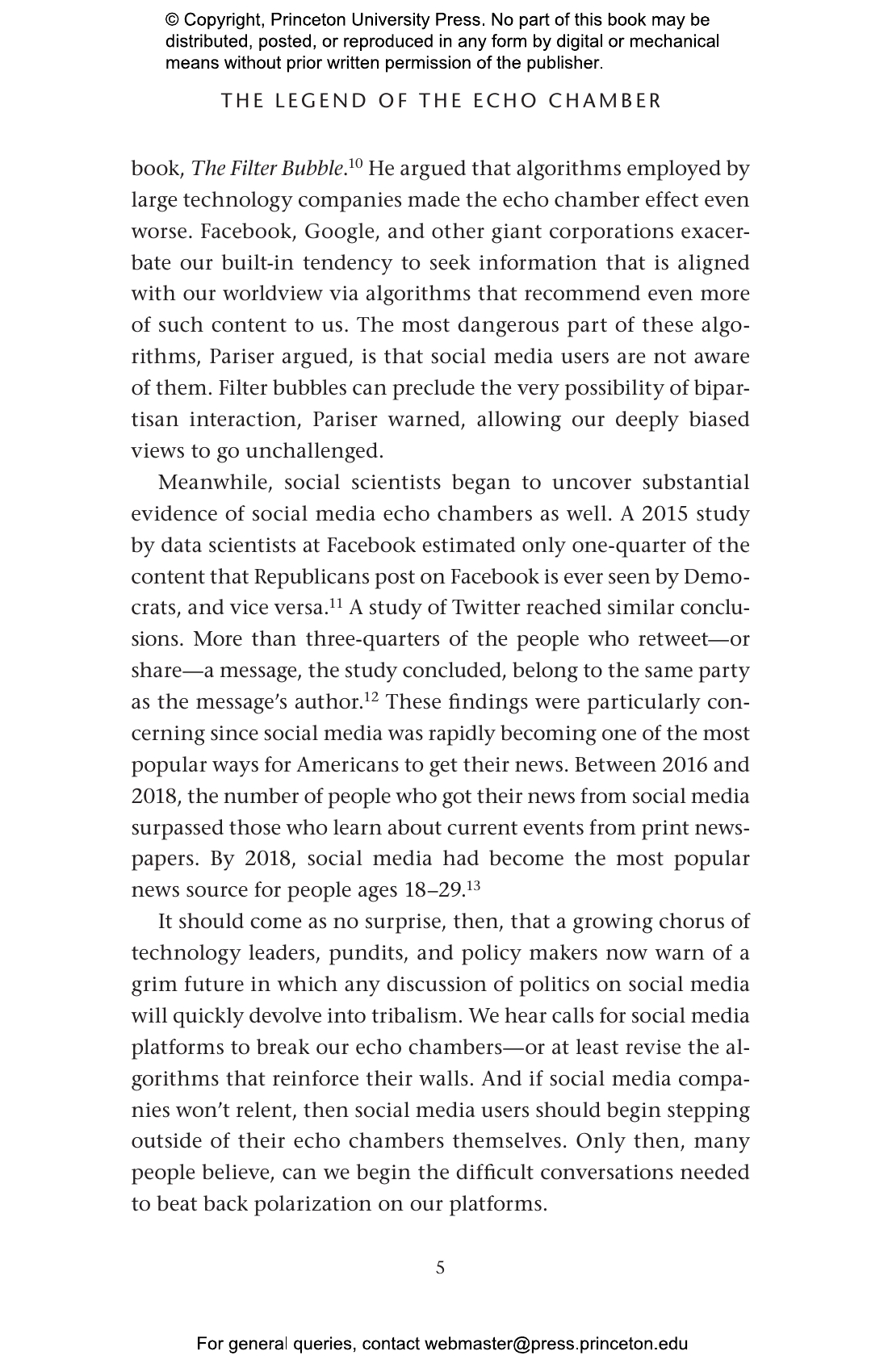 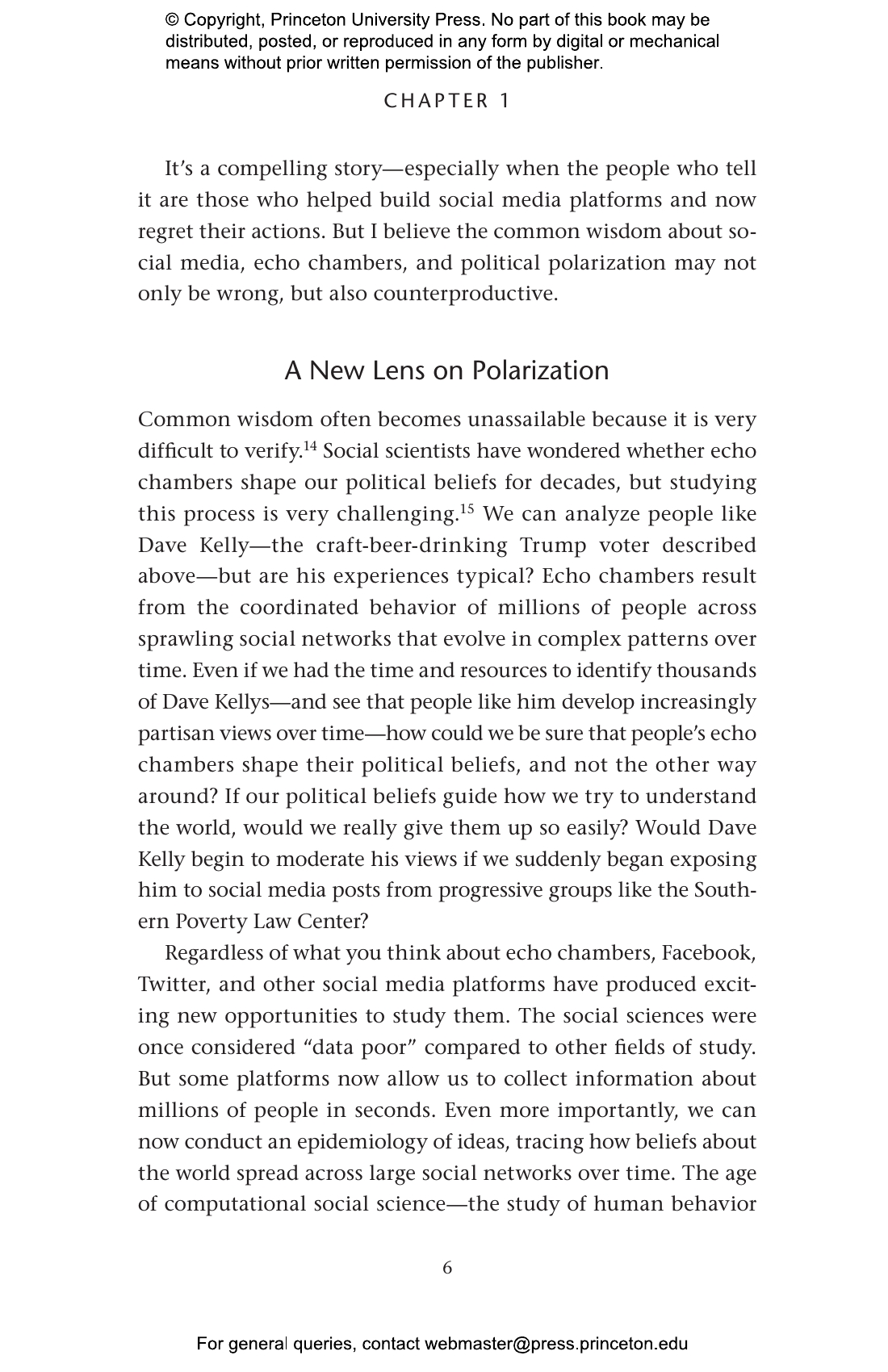 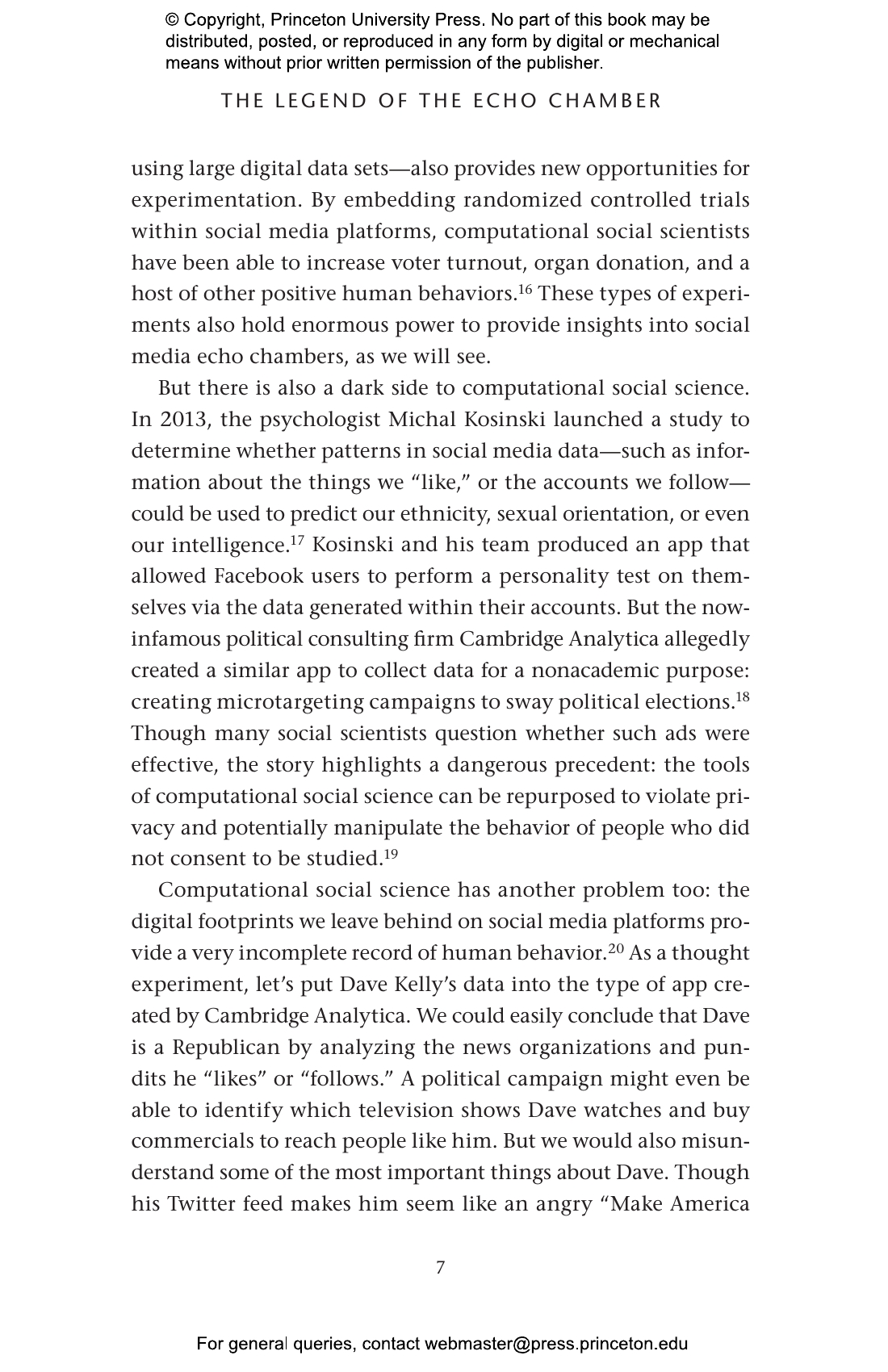 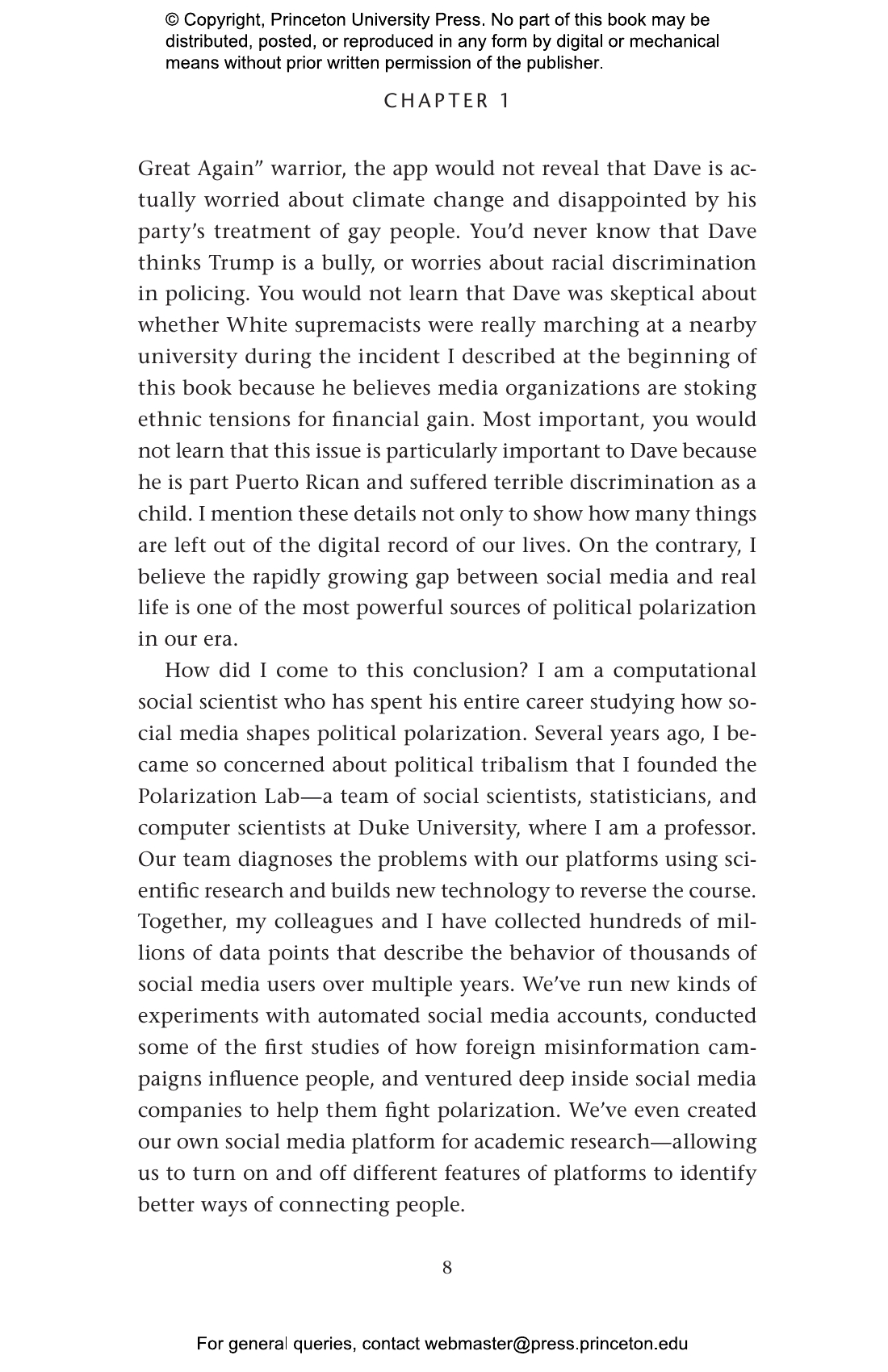 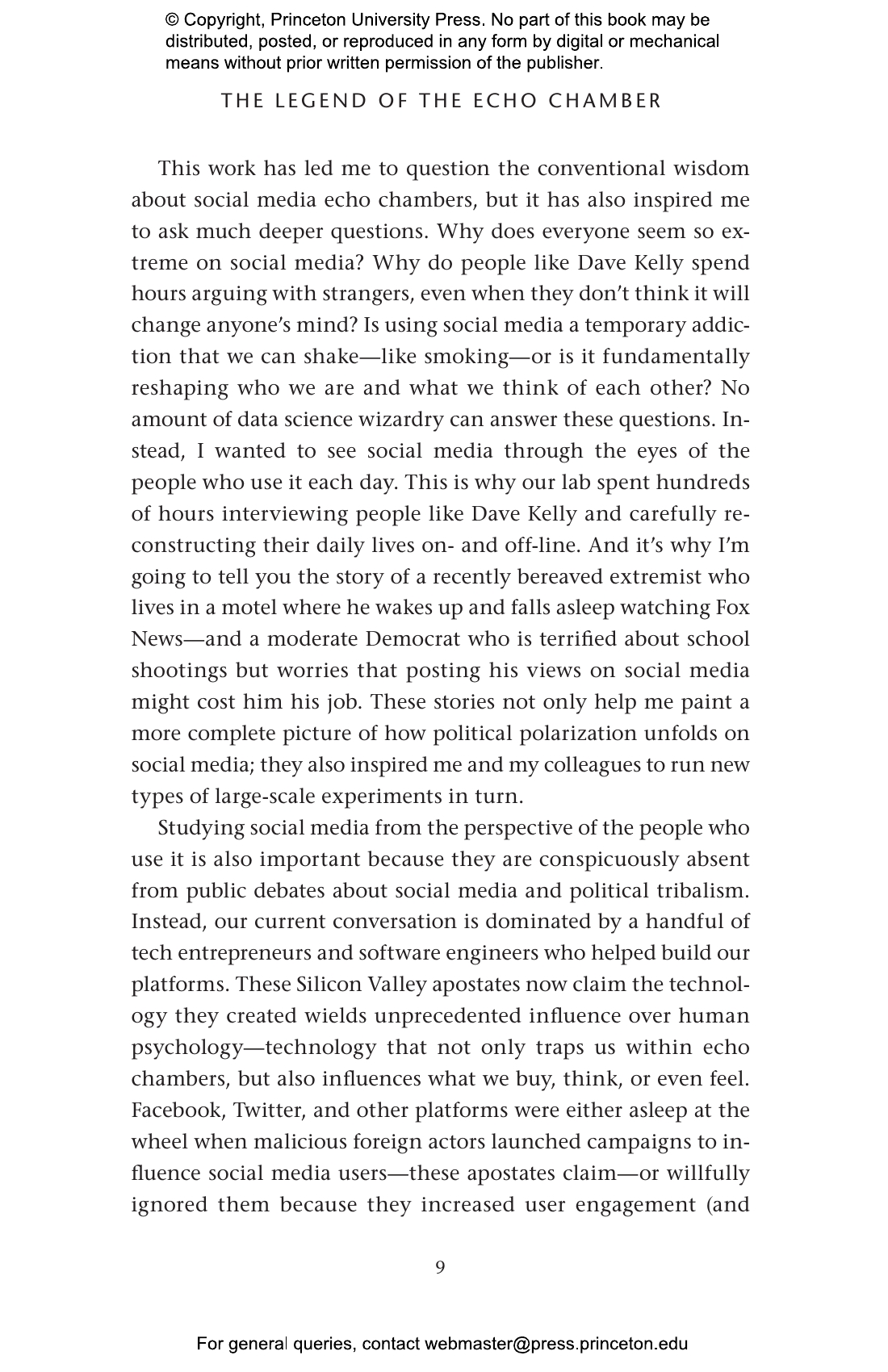 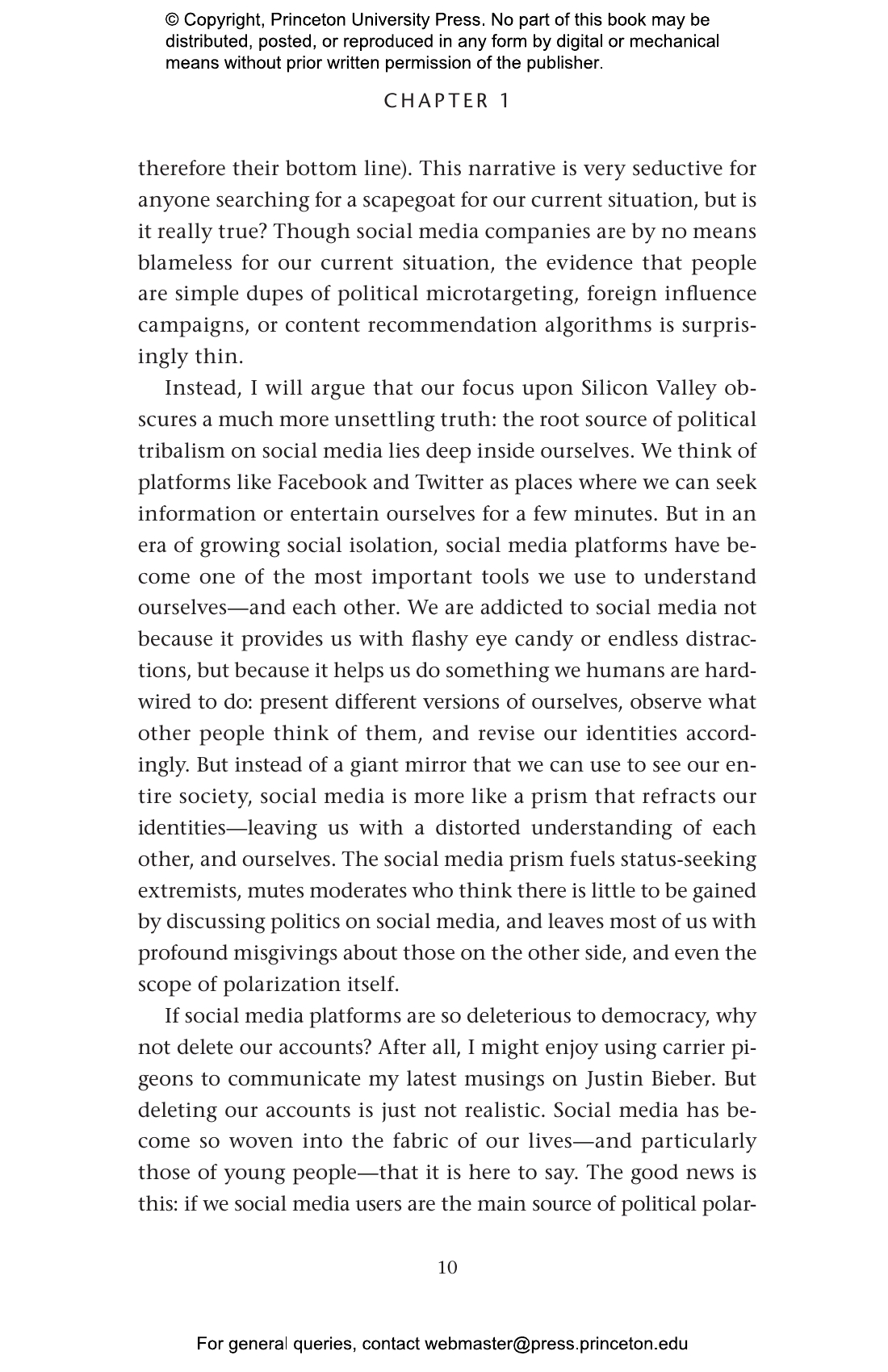 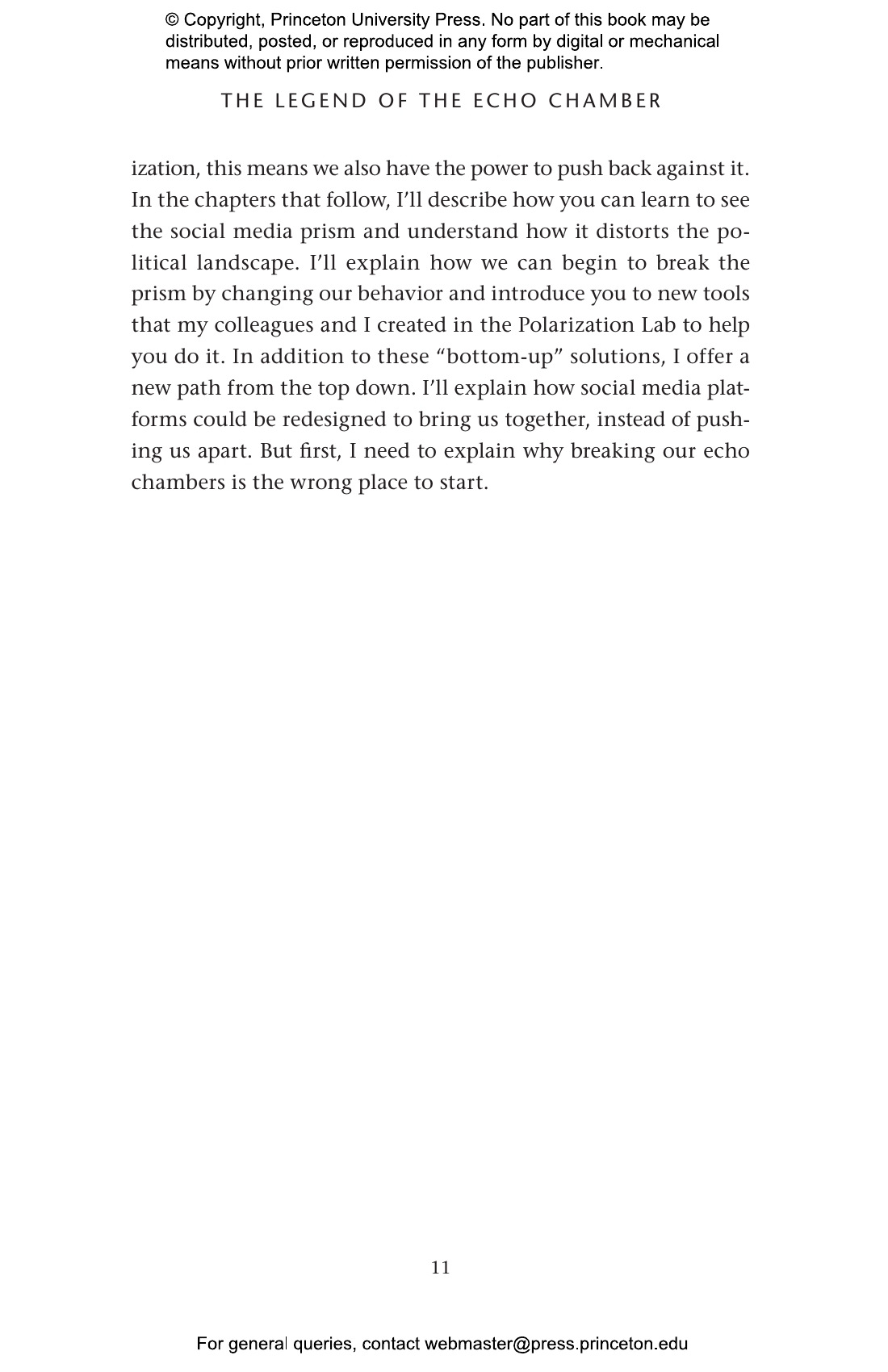 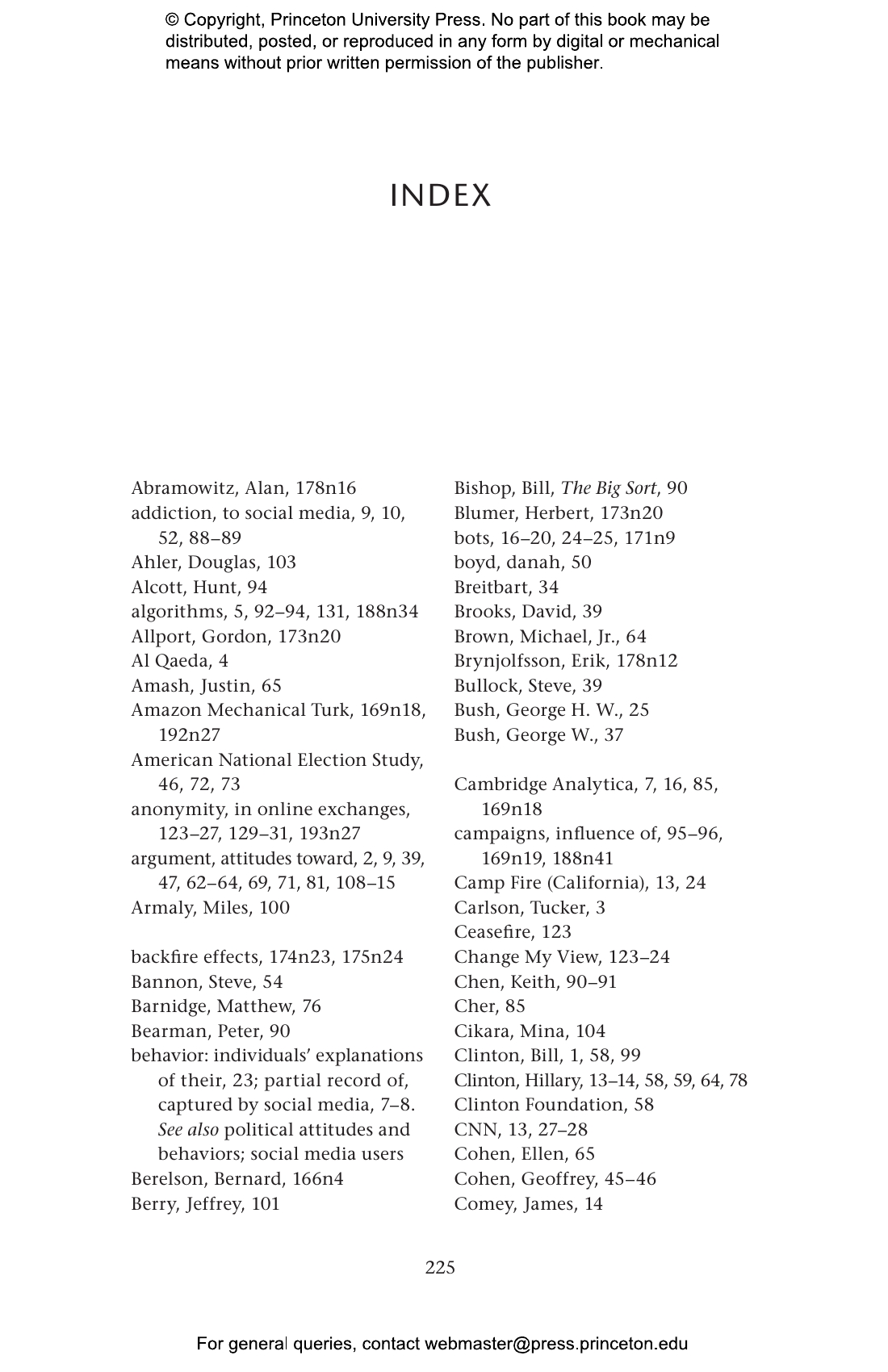 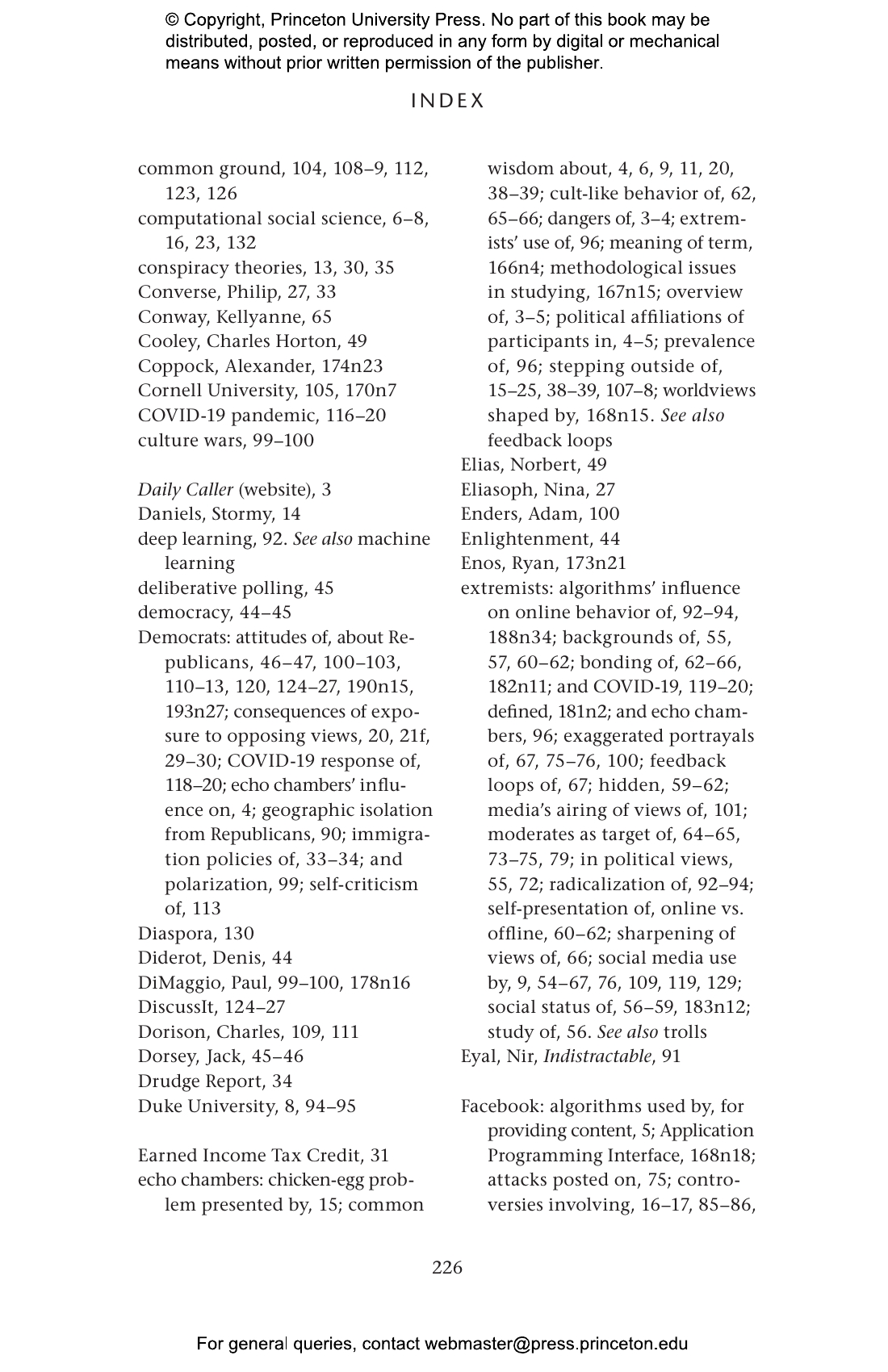 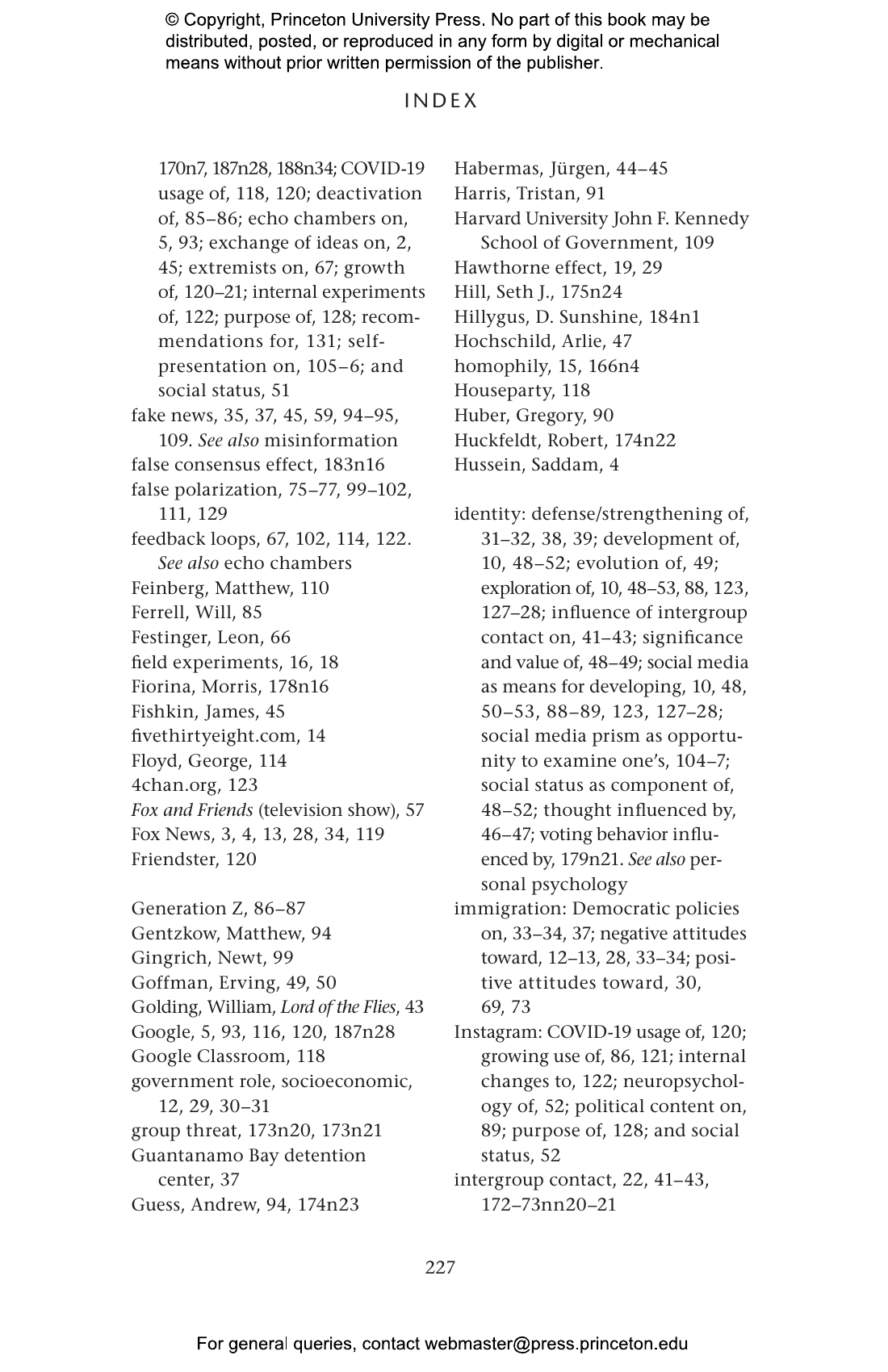 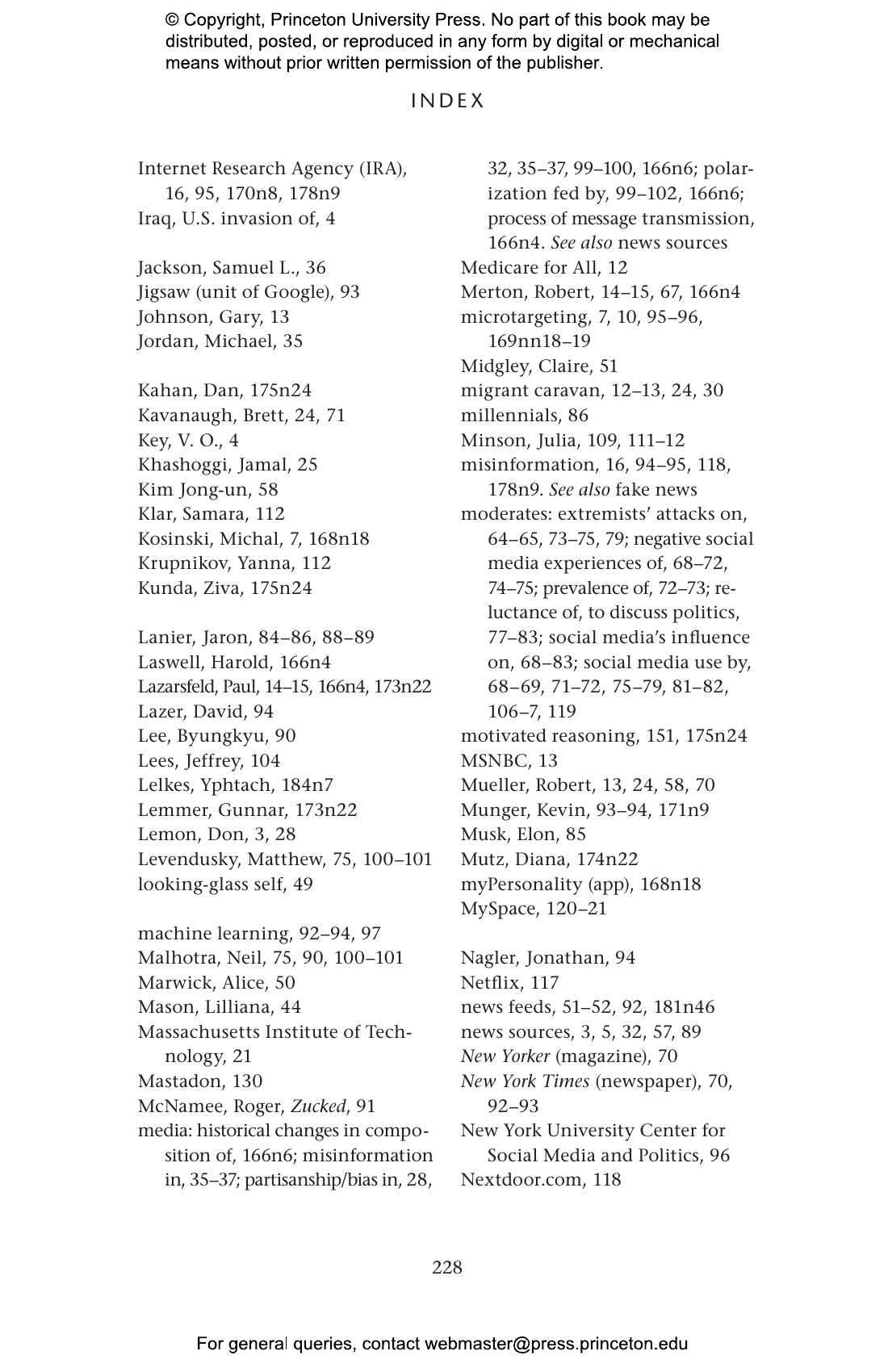 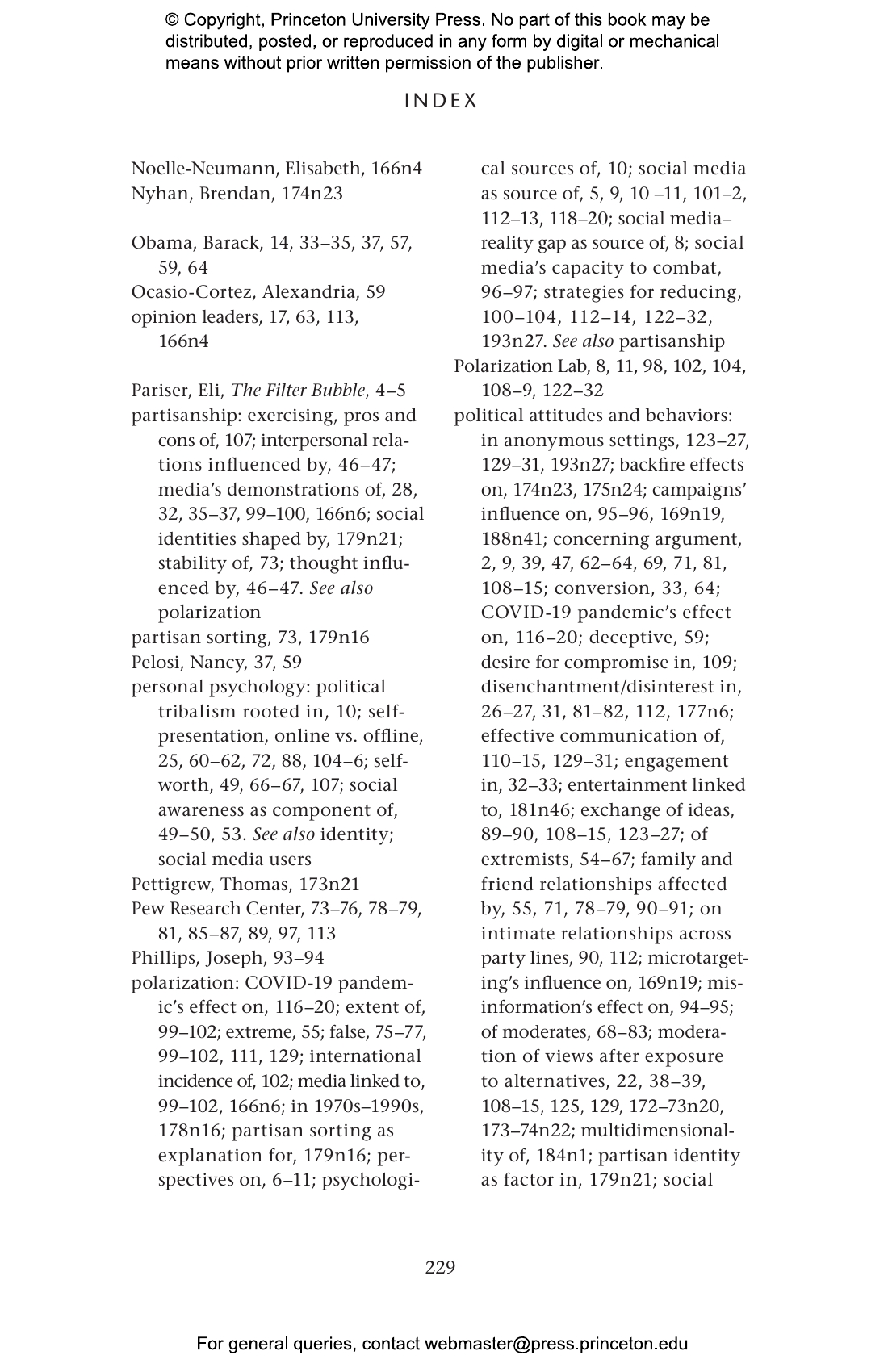 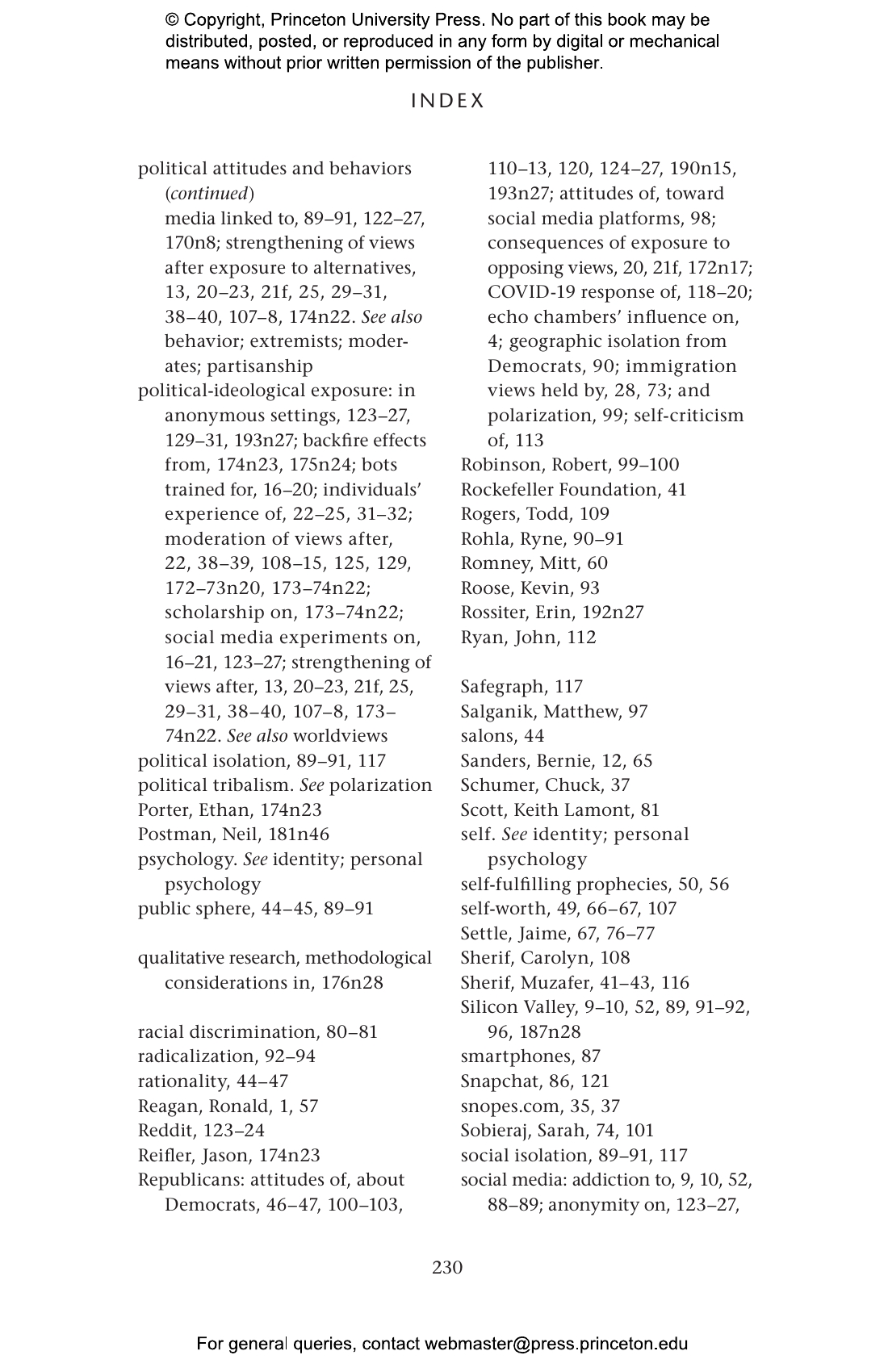 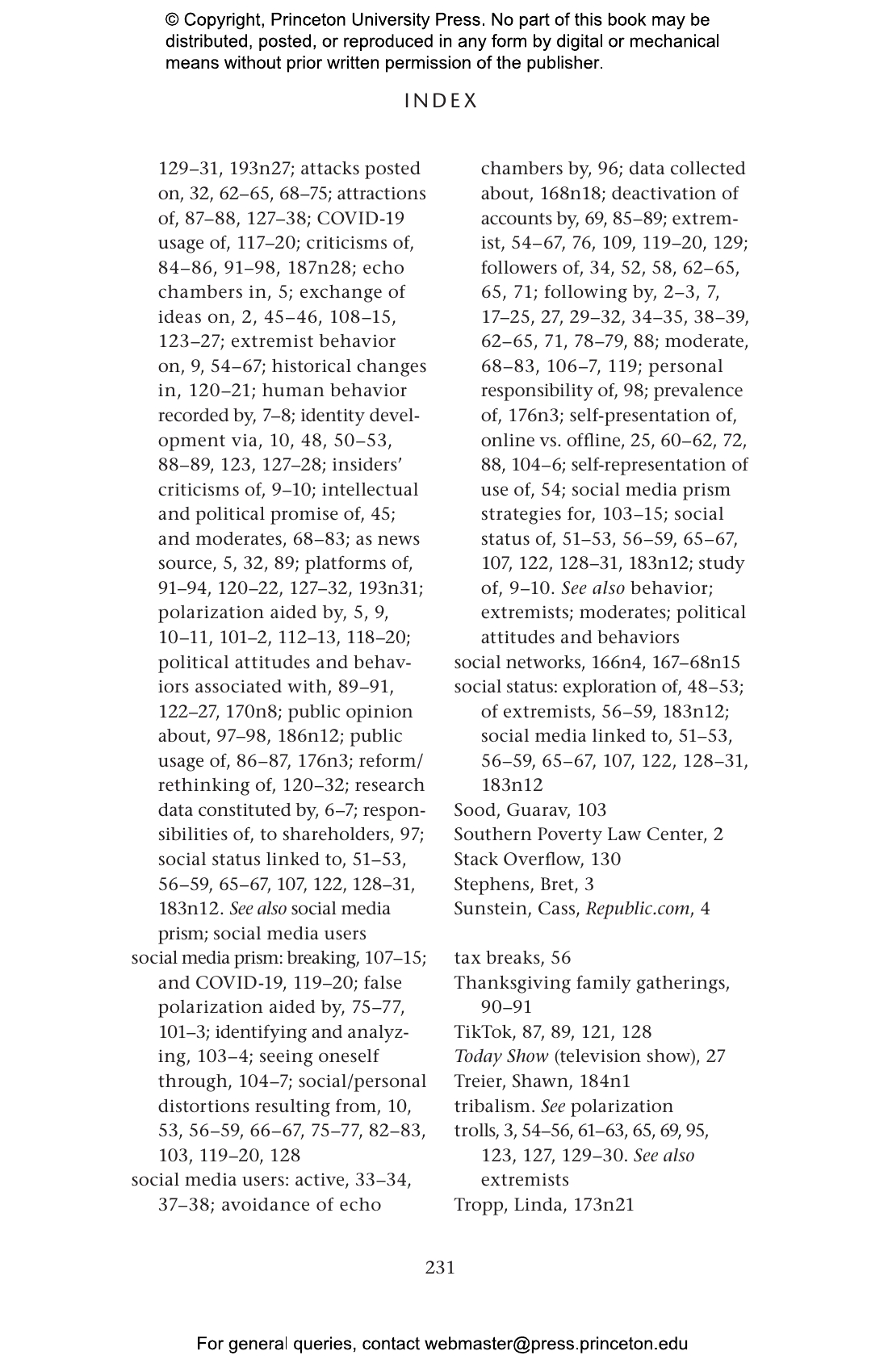 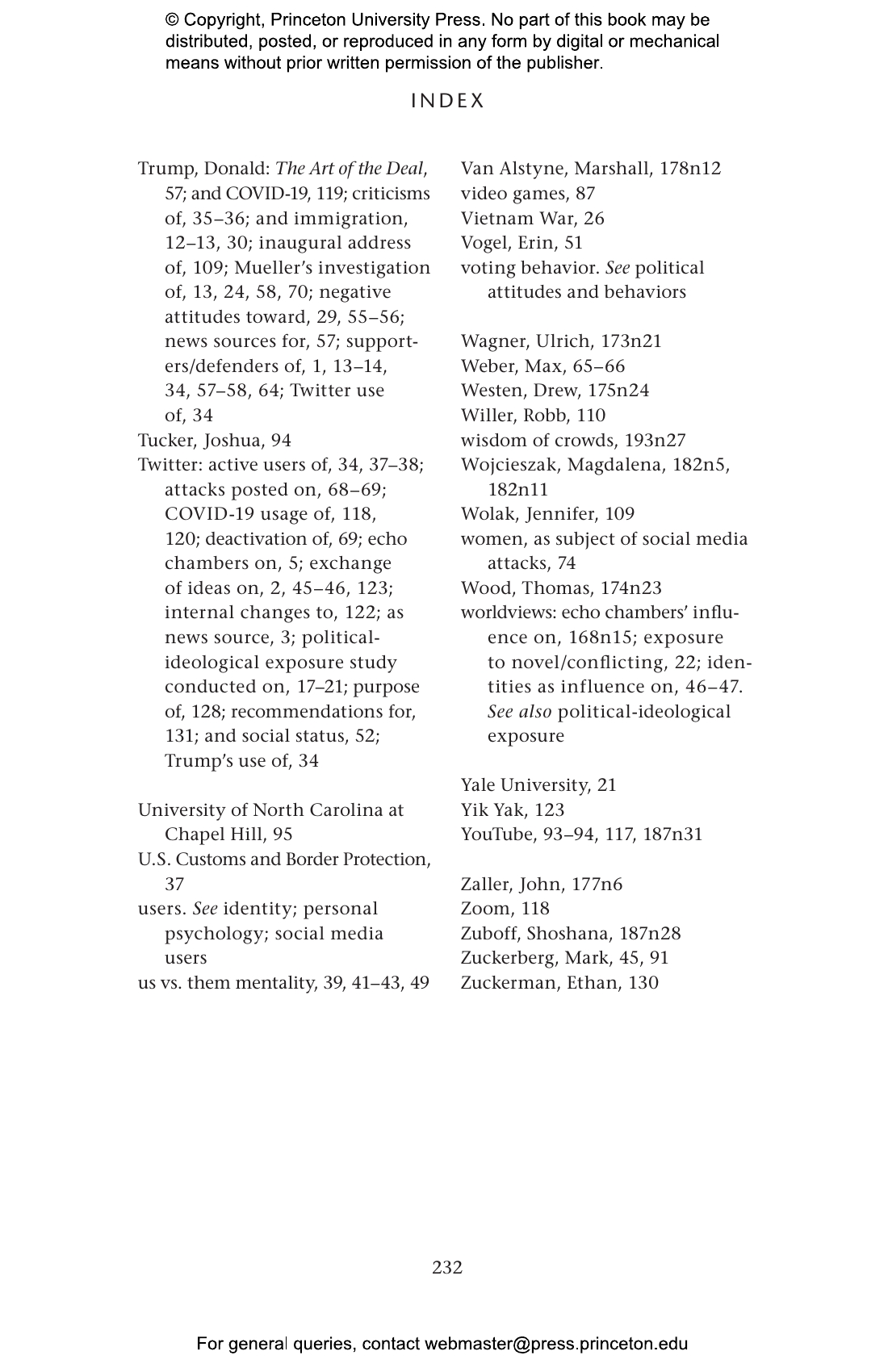 Chris Bail on polarization and the pandemic 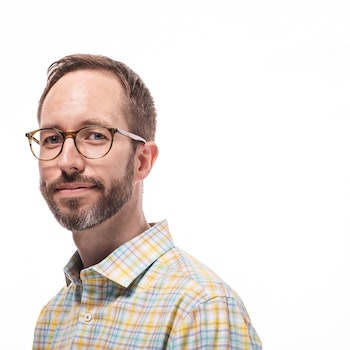 "Masterful. . . . Immediately relevant. . . . Breaking the Social Media Prism answers important questions about the origins of our current political environment and suggests how existing platforms and reward systems might be redesigned to make things better. Bail’s scientific conclusions are refreshing in a space dominated by informed speculation, and the book offers hope that data-driven solutions can bring us back from the brink."—Jennifer Golbeck, Science

"[Bail] draws on extensive interviews with social media users to explore the profound differences between people’s online and real-life personas, and lucidly details his own efforts to develop a new social media platform that cultivates more civil discourse. This is a persuasive and well-informed look at one of today’s most pressing social issues."—Publishers Weekly

"Every one of Bail's chapters threads together multiple lines of thought — some dating back decades or centuries — interweaving the frontiers of online social science research with the traditions they emerge from. . . . Bail's analysis of the problem of online polarization is clarifying and compelling."—Paul Rosenberg, Salon

"Surprising. . . . Bail’s findings point to an interesting conclusion for the building of society: when it comes to bridging differences, in-person contact really helps."—Nathan Heller, New Yorker

"Wonderful. . . . Bail has provided social scientists, concerned citizens, and policymakers with an invaluable piece of work for understanding how social media is exacerbating our political divisions, and how we might forge a better future both online and off."—Thomas Koenig, Merion West

"Bail offers needed insights into the distortions that result when human persons are reduced to a set of data points."—Jeffrey Bilbro, New Atlantis

"Bail delivers an efficient, engaging treatise on the polarizing effects of social media in the USA. . . . He expertly marshals evidence from his own research and modern computational social science to demonstrate how common narratives of social media miss the mark. . . . A thoughtful, compelling story of polarization on social media. . . .[Breaking the Social Media Prism] adds admirably to the dialog on political polarization. It synthesizes a body of research—both seminal and emerging—into a coherent picture, while making its own contributions. The prose is playfully conversational, accessible to a lay audience, and at fewer than 150 pages in the main text, refreshingly concise."—Jason Jeffrey Jones, Social Forces

"Breaking The Social Media Prism challenges the accepted wisdom of echo chambers and algorithms and suggests that if we really want to solve political tribalism online the solution isn’t just some isolated thing called technology but also inside ourselves."—Samira Shackle, With Reason Podcast

"A compelling story of both why social media is so addictive and how that addictiveness reverberates in the political process. . . . A fascinating book that, especially by dint of being accessible to a wide audience, has the potential to play an incredibly important role in starting to reset a lot of what has come to be accepted as received wisdom—especially around the complicated relationship between social media and political polarization—in line with what rigorous scholarly analysis has actually learned."—Joshua Tucker, American Journal of Sociology

"Essential reading for many of us who are concerned with the impact of social media on civility and democracy."—Andrew Keen, Keen On podcast

"Every once in a while, something comes along and causes a paradigm shift in its respective field or medium, a breakthrough that challenges prevailing narratives for explaining the world. Sometimes those breakthroughs are few and far between. For fields marked by rapid change and development, those breakthroughs can occur more frequently. In the rapidly changing field of social media and its impact on society, Chris Bail’s Breaking the Social Media Prism stands to become one of those paradigm shifts. "—Austin Gravley, FaithTech

"There is something for everyone in this book. . . . Drawing from rich interview data with people who use social media every day, Bail vividly depicts people’s lives and motives that result in political polarization on social media. Through engaging storytelling that puts a human face on political extremists and silent moderates on social media platforms, the book highlights the responsibility and agency of individual users to reduce political polarization on social media. Bail empowers readers and holds them accountable by shining a light on their instincts and motives that contribute to the social media’s prismatic effect."—Elizabeth Baik, New Media & Society

"This misperception of reality that we see through the networks is what Bail calls 'prism' in the title of the book. 'The people who exaggerate the extremism of the other side are significantly higher among those who use the networks for information,' he explains. This causes a wrong idea of ​​society for those who are there a lot and for those who use Twitter as an opinion thermometer. 'More pernicious is when the media uses Twitter as a display of public opinion, because it amplifies this misperception.'"—Jordi Pérez Colomé, El País

"Shattering popular myths and in the process, uncovering some extraordinary revelations, Chris Bail’s enormously influential book, Breaking the Social Media Prism is a much needed antidote in, and, for bewildering times where fake news proliferates and political polarization runs amok on various social media platforms."—Blogternator

"Innovative. . . .this book will challenge many of your beliefs about the online world including that the solution is to completely disengage. . . . We suggest you read Breaking the Social Media Prism and evaluate your own online behavior and those you bump into."—Purple Principle podcast

"A very thought-provoking book, full of rich empirical evidence, a well-articulated narrative on the social media prism and it introduces potential solutions for the problems it discusses. "—Xiuhua Wang, Sociology

The Polarization Lab at Duke University