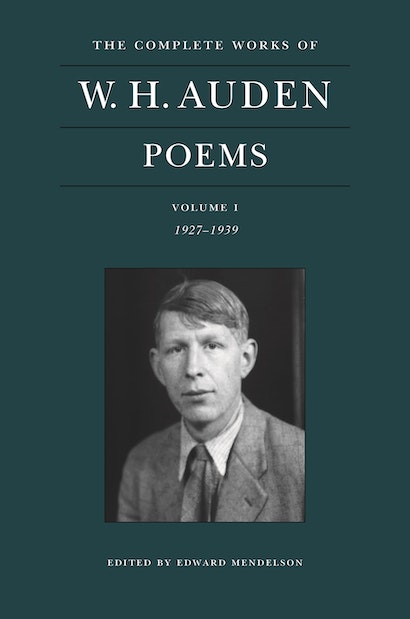 W. H. Auden (1907–1973) is one of the greatest poets of the twentieth century, and his reputation has only grown since his death. Published on the hundredth anniversary of the year in which he began to write poetry, this is the first of two volumes of the first complete edition of Auden’s poems. Edited, introduced, and annotated by renowned Auden scholar Edward Mendelson, this definitive edition includes all the poems Auden wrote for publication, in their original texts, and all his later revised versions, as well as poems and songs he never published, some of them printed here for the first time.

This volume traces the development of Auden’s early career, and contains all the poems, including juvenilia, that he published or submitted for publication, from his first printed work, in 1927, at age twenty, through the poems he wrote during his first months in America, in 1939, when he was thirty-two. The book also includes poems that Auden wrote during his adult career with the expectation that he might publish them, but which he never did; song lyrics that he wrote to be set to music by Benjamin Britten, but which he never put into print; and verses that he wrote for magazines at schools where he was teaching.

The main text presents the poems in their original published versions. The notes include the extensive revisions that he made to his poems over the course of his career, and provide explanations of obscure references.

Edward Mendelson is the Lionel Trilling Professor in the Humanities at Columbia University and the Literary Executor of the Estate of W. H. Auden. His books include Moral Agents, The Things That Matter, and Early Auden, Later Auden.

"Mendelson is to be congratulated on this magnificent addition to our generation’s definitive Auden."—John Fuller, Times Literary Supplement

"[Auden’s] oeuvre has been given a new life. . . . [in these] two new and heavily annotated volumes. . . . [Mendelson’s] mastery of this sprawling material is legendary."—Brad Leithauser, Wall Street Journal

"Mendelson has championed a reassessment of the poet’s later work. He has not achieved this through polemic, but rather through a patient and careful effort. . . . I have been reading and teaching and writing about Auden’s poetry for many years, but I have taken the opportunity offered by these two volumes to try, as best I can, to encounter it all anew."—Alan Jacobs, Harper's Magazine

"Exhilaratingly prospective. . . . some of the most vivid poems ever committed to English . . . these two books are a monument to the acumen, scholarship, and perseverance of Edward Mendelson."—Ron Horning, Brooklyn Rail

"Magnificent. . . . Mendelson’s Auden has long been regarded as a monument of literary scholarship, and these two heavy poetry volumes complete the grounds for that acclaim. . . . An amazing thicket of scholarship and commentary draped around some of the most-studied and most-quoted poetry of the 20th century."—Steve Donoghue, Open Letters Review

"To read Auden’s Complete Works therefore is not just to encounter the inventions of a polymathic, often ingenious writer and poet, but to enter into a ‘whole climate of opinion,’ to explore an age by way of one of its representative figures. . . . Edifying."—James Matthew Wilson, National Review

"This book is so good."—Michael Glover, The Tablet

"Auden is not an occasional poet, nor does he prove the (in my opinion, wrongheaded and incorrect) theory that even good poets only produce a few memorable poems. This is an amazing body of work, composed by a writer who wrote his way through life, always thinking and paying attention. . . . Writers write, and Auden did. What wonderful stuff it is."—Rupert Loydell, Tears in the Fence

"These two handsomely produced volumes from Princeton University Press are not only a monument to their editor’s scholarship but a timely reminder of the enduring importance of poetry and, in particular, the contribution made to it by W.H. Auden."—David Cooke, The High Window

"As authoritative a presentation as we are likely ever to get. . . . Wonderful books."—David Mason, Hudson Review

"These volumes show the poetic beauty and intellectual audacity of Auden’s work with a power that left me exultant."—Richard Davenport-Hines, Times Literary Supplement