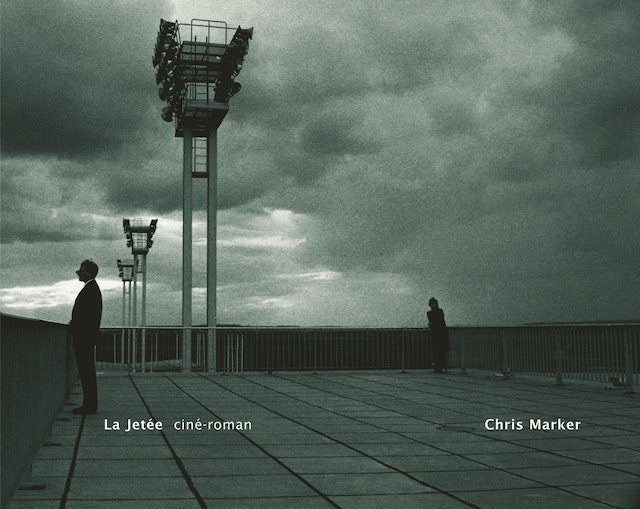 La Jetée is the book version of the legendary 1964 science fiction film about time and memory after a nuclear apocalypse. Chris Marker, the undisputed master of the filmic essay, composed the film almost entirely of still photographs.

It traces a desperate experiment by the few remaining survivors of World War III to recover and change the past, and gain access to the future, through the action of memory. A man is chosen for his unique quality of having retained a single clear image from prewar days: no more than an ambiguous memory fragment from childhood — a visit to the jetty at Orly airport, the troubling glance of an unknown woman, the crumpling body of a dying man.

These elements become crucial hinge-points in the ensuing narrative, thickening and accumulating nuance with each successful expedition into the historical past. The image of the woman, increasingly suffused now with the time- and eros-bestowing capacities of a deep but impossible love, provides the kernel for the recovery of the dimension through which humankind and history will be saved, as well as the tragic abyss into which both the hero and the narrative inexorably fall. The story Marker tells — a stunning parable of our modern fate — is about the death of the world, about loss, memory, hope, and the indomitable power of love. This edition reproduces the original film’s images along with its accompanying text in both English and French.

“This book version of La Jetée is, to my mind, astonishingly beautiful. It brings a total freshness to the work and a new way to use photos to deal with dramatic events. Not a film’s book, but a book in its own right — the real ciné-roman announced in the film’s credits.”—Chris Marker

“This strange and poetic film, a fusion of science fiction, psychological fable, and photomontage … creates its own conventions from scratch. It triumphantly succeeds where science fiction invariably fails.”— J.G. Ballard