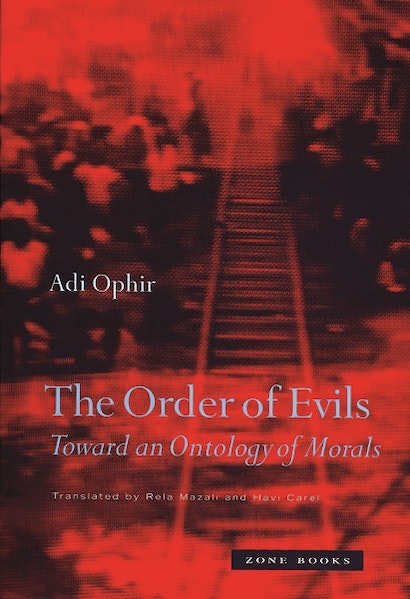 What remains of moral judgment when truth itself is mistrusted, when the validity of every belief system depends on its context, when power and knowledge are inextricably entangled? Is a viable moral theory still possible in the wake of the postmodern criticism of modern philosophy? The Order of Evils responds directly to these questions and dilemmas with one simple and brilliant change of focus.

Rather than concentrating on the age-old themes of justice and freedom, Adi Ophir offers a moral theory that foregrounds the existential and political nature of Evil. Ophir’s main contention is that evil is neither a diabolical element residing in the hearts of men nor a meaningless absence of the good. Rather, it is the socially structured order of “superfluous evils.”

Evils, like pain, suffering, loss, and humiliation, are superfluous when they could have — but have not — been prevented. Through close analysis of seminal works by modern and postmodern philosophers — from Rousseau, Kant, Marx, Sartre, and Arendt to Foucault, Lévinas, Derrida, and Lyotard — Ophir forges a new perspective for thinking about what it means to be a moral being; to be moral, he argues, is to care for others and to be committed to preventing, at all costs, their suffering and distress.

A theoretically sophisticated work, The Order of Evils also bears the traces of Ophir’s own political and personal experiences as an Israeli philosopher and activist. Two major events in recent Jewish history have profoundly influenced his thinking: the Holocaust and the prolonged Israeli domination of Palestinians in the occupied territories, both of which are interpreted within the author’s moral framework as systematic productions of evils.

Ophir does not compare the two events. Instead, he introduces a typology of disasters that allows them to be located within the wide spectrum of human-generated calamities whose specificity and general patterns emerge clearly and distinctly as what they are and are not.

“Ophir presents a well-argued alternative to other philosophical outlooks that ground moral life on basic concepts such as rights, duties or pleasure. A sophisticated phenomenological account of the superfluous evil, The Order of Evils explores both the ontology of evil and its social and experiential structure. This is the most sustained and brilliant philosophical discussion of evil I have ever read.” — Moshe Halbertal, co-author of Idolatry

“I have rarely read a text so precise, methodical, and moving as this sustained reflection on suffering, social oppression, and philosophical critique. If we yearn to know what philosophy can become when it reflects upon the historical conditions of its own making, thematizing an unspoken violence presupposed by its own location, we have in Ophir’s book a truly brilliant example. The Israeli occupation of Palestinian lands produces a relentless situation for critical reflection for this intellectual inquiry, producing a profound and systematic reflection on the ethical exigencies of critical thought. Ophir’s lucid and systematic meditation on suffering constitutes a model for responsible intellectual work in our times.” — Judith Butler, author of Precarious Life: Powers of Violence and Mourning