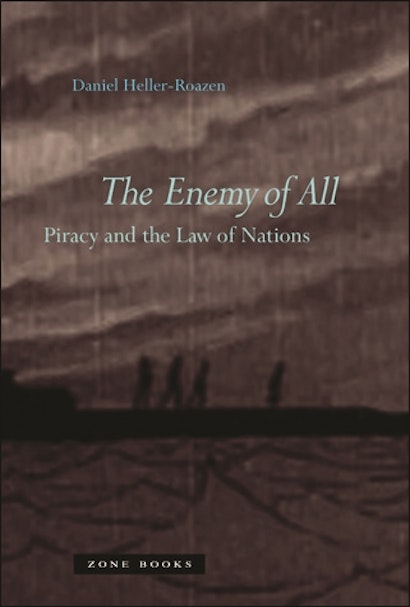 The pirate is the original enemy of humankind. Before humanitarian organizations, human rights, and the establishment of international law in the early modern period, the Roman statesmen already made this point perfectly clear. As Cicero famously remarked, there are certain enemies with whom one may negotiate and with whom, circumstances permitting, one may establish a truce. But there is also an enemy with whom treaties are in vain and war remains incessant. This is the pirate, whom the ancient jurists considered to be “the enemy of all.”

Departing from Cicero’s account of foes, The Enemy of All reconstructs the shifting place of the pirate in legal and political thought from the ancient to the medieval, modern, and contemporary periods. Antiquity already encountered the sea thief in politics as in the law. Classical letters from Homer to the end of the Roman Empire contain ample accounts of pirates of various sorts.

The Roman jurists assigned to the pirate as a legal person an exceptional position in civil and international law. Their theory was to be the point of departure for the Christian jurists of the Middle Ages, who defined the pirate as “the enemy of the human species.” Later, the thinkers and statesmen of modernity went one step further. Elaborating a new international code of law and ethics, the writers of the Enlightenment represented the pirate as the ultimate “enemy of humanity.”

Today, as Heller-Roazen argues, the pirate furnishes the key to the contemporary paradigm of the universal foe. This is a legal and political person of exception, neither criminal nor enemy, who inhabits an extraterritorial region. Against such a foe, states may wage extraordinary battles, policing politics and justifying military measures in the name of welfare and security.

Drawing on the diverse materials of several disciplines, from law and history to political theory and literature, The Enemy of All brings to light a single paradigm that defines the act of piracy. This “piratical paradigm” consists in the conjunction of four traits: a region beyond territorial jurisdiction; agents who may not be identified with an established state; the collapse of the distinction between criminal and political categories; and the transformation of the concept of war.

Whenever we hear of regions beyond “the line of the law,” in which acts of “indiscriminate aggression” have been committed “against humanity,” we must begin to recognize that these are acts of piracy. Long said to be a person of the distant past, the enemy of all is closer to us today than we may think. Indeed, he may never have been closer.

"Brimming with learning and yet delightful to read, this brief book offers an enlightening and truly original reflection, at the crossroads of history, law andphilosophy, on the confusions that threaten us since September 11th."—Le Figaro

"Combining the political, legal, philosophical, geographical, and historical aspects of his subject, Heller-Roazen leads us from antiquity to Afghanistan with clarity. While America’s present-day struggles are not his main concern, the long-view positions he takes will certainly be of interest to readers who are asking more-crucial-than-ever questions."—Rain Taxi

"Daniel Heller-Roazen has dropped an intellectual explosive whose dangerousness we only notice once we have read the book through to the end…Even if one doesn’t follow Heller-Roazen’s political conclusions: This is book is as wise as it is learned. In a country that does not think about the figure of the pirate much because of its focus on the land, it can clarify a great deal."—Herfried Münkler, Die Zeit