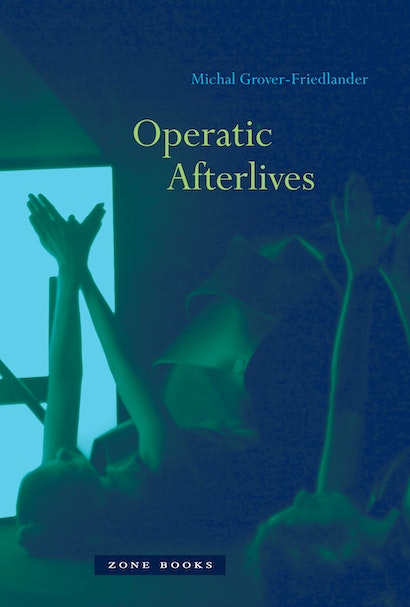 In Operatic Afterlives, Michal Grover-Friedlander examines the implications of opera’s founding myth — the story of Orpheus and Eurydice: Orpheus’s attempt to revive the dead Eurydice with the power of singing. Traditionally, opera kills its protagonists that best embody its ideal of the singing voice, but Grover-Friedlander argues that opera at times also represents the ways that the voice, singing, or song acquire their own forms of aliveness and indestructibility. Operatic Afterlives shows the ultimate power that opera grants to singing: the reversal of death.

Grover-Friedlander examines instances in which opera portrays an existence beyond death, a revival of the dead, or a simultaneous presence of life and death. These portrayals — from Puccini’s Gianni Schicchi to Rocca’s Il dibuk, from Seter’s Tikkun Hatsot to Ching’s Buoso’s Ghost, from Zeffirelli’s Callas Forever to Disney’s The Whale Who Wanted to Sing at the Met — are made possible, she argues, by the unique treatment of voice in the works in question: the occurrence of a breach in which singing itself takes on an afterlife in the face of the character’s death. This may arise from the multiplication of singing voices inhabiting the same body, from disembodied singing, from the merging of singing voices, from the disconnection of voice and character.

The instances developed in the book take on added significance as they describe a reconfiguration of operatic singing itself. Singing reigns over text, musical language, and dramatic characterization. The notion of the afterlife of singing reveals the singularity of the voice in opera, and how much it differs categorically from any other elaboration of the voice. Grover-Friedlander’s examples reflect on the meanings of the operatic voice as well as on our sense of its resonating, unending, and haunting presence.

“This is a most remarkable book, both serious and adventurous in its continuous exercise of musicianship, its critical literary intelligence, and its range of concern … . Operatic Afterlives is a detailed yet philosophical portrait of human responsiveness, of what it means to possess human expressiveness, in a word of what it is to be human. The work of a beautifully trained musician, this book invites readers to deepen their understanding of the human voice. Anyone seriously interested in the amazing realm of opera will not want, nay will not dare, to ignore this invitation.”— Stanley Cavell, Walter M. Cabot Professor Emeritus of Aesthetics and the General Theory of Value, Harvard University