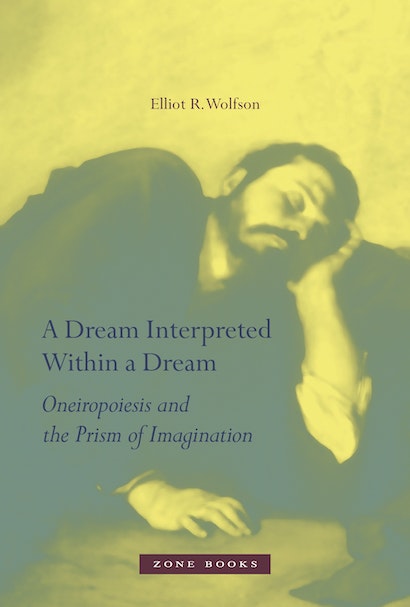 Dreams have attracted the curiosity of humankind for millennia. Elliot R. Wolfson’s A Dream Interpreted Within a Dream: Oneiropoiesis and the Prism of Imagination grapples with the allusive and elusive place dreaming occupies in the panorama of human experience. Drawing on a variety of contemporary academic disciplines, Wolfson returns to and rethinks past explications of the dream: that the dream state and waking reality are on an equal phenomenal footing; that the sensory world is the dream from which one must awaken by waking to the dream in which one is merely dreaming that one is awake. By interpreting the dream within the dream, Wolfson articulates how a productive paradox emerges to reveal the wakeful character of the dream and the dreamful character of wakefulness.

Wolfson utilizes psychoanalysis, phenomenology, literary theory, and neuroscience, to elucidate the oneiric phenomenon in a vast array of biblical, rabbinic, philosophical, and kabbalistic texts. No one morphology of the dream phenomenon is either sufficient or comprehensive. Rather, Wolfson proposes a linguistic archaeology of the dream, a philosophically inflected excavation of a psychological phenomenon that celebrates the contingent and ambiguous as signifiers of truth conceived as proportionate to, but not prescribed by nature. As such, the dream is classified as the immanentizing transcendence under the sign of the imaginary.

Through close readings, Wolfson interprets the mythologic of dreams. He discovers therein how and in what form dreams uniquely display the concurrence of purportedly contradictory and incongruent images. To heed the cadence of the dream is, therefore, to appropriate a calculus of the noncalculable, and to embrace the paradox of fictional truth whose authenticity can be gauged only from the standpoint of its artificiality. Through Wolfson’s artful, lucid, and erudite readings, the dream is shown to be an imaginal excessiveness, at once foreseeable but unprecedented, the semblance of the simulacrum wherein truth does not oppose deception, wherein the appearance of truthfulness is impossible to determine independently of the truthfulness of appearance.

A Dream Interpreted Within a Dream will ultimately call forth a new way to think the effects and transformations of phenomenological experiences, affective, corporeal and cognitive.

“For his fiftieth birthday Elliot Wolfson has offered himself a dream-book, dazzling and rich, poised against finitude’s charge. What an extraordinary gift for readers of poetry and philosophy, for the psychoanalyst companioned by theory! Dropping into intractable regions of thought, Wolfson explores with enthralling precision the edges of asymmetry, prophesy, the alternate logic of dream archeology and often blinding illumination that such a venture implies.”— Avital Ronell, author of Fighting Theory and The Test Drive

“Over the last two decades, Elliot R. Wolfson has produced a most remarkable body of scholarship on the Kabbalah. Here, in his new book on the mind-bending paradoxes of the dreamscape and its actualizations in the acts and arts of interpretation, he applies his thought to that mysterious space of the imagination where the dreamer dreams and is in the process dreamt. Understanding, like his rabbinic and kabbalistic sources, the dream as a self-creating text that ‘always follows the mouth,’ that is, that requires acts of interpretation to become real, Wolfson employs a whole range of interpretive tools to reveal what is concealed within the dreamscape: quantum physics and neuroscience, hermeneutical theory, psychoanalysis, and literary theory, the ‘mythologic’ or coincidence of opposites, even the philosophy and transcendence of time within Mind as we have it in Buddhist and Hindu idealism. It is in this way that the dream becomes in Wolfson’s vision a kind of spontaneous poetry or, as the Jewish sages had it, one-sixtieth of prophecy itself.”— Jeffrey J. Kripal, author of Authors of the Impossible: The Sacred and the Paranormal

“The book’s characteristic Wolfsonian achievement is to open to the non-philosopher the significance of philosophical thought without reducing its complexity. The lucidity of the exposition and the clarity and brilliance of Wolfson’s thinking is what makes this happen. Equally characteristic is to show how earlier traditions have been engaged in asking these questions. Although much of the text draws on Wolfson’s main expertise in Jewish mystical thought, the analysis extends far beyond the confines of that discipline, engaging questions both ontological and epistemological. A book for everyone interested in the phenomenon of dream consciousness.”— Daniel Boyarin, author of Socrates and the Fat Rabbis