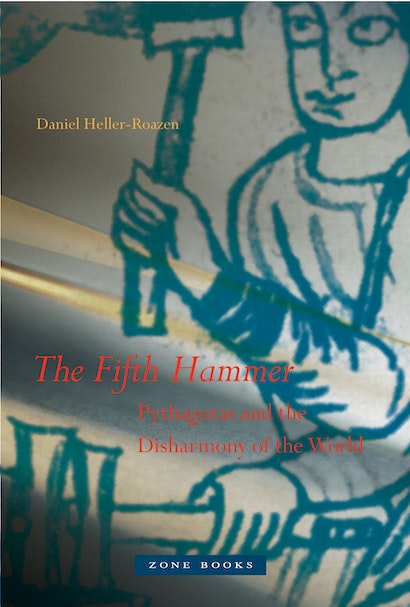 An ancient tradition holds that Pythagoras invented harmony. It is said that one day, he wandered by a forge and, hearing a wondrous sound come from within, ventured in to investigate. He found five men hammering with five hammers. To his astonishment, he discovered that four of the five hammers stood in a marvelous set of proportions, which, when combined, allowed him to reconstruct the laws of music. But there was also a fifth hammer. Pythagoras saw and heard it, but he could not measure it; nor could he reason its discordant sound. He therefore discarded it.

What was this hammer, such that Pythagoras chose so decidedly to reject it? In The Fifth Hammer, Daniel Heller-Roazen lucidly shows how that fabled gesture offers a key for understanding ideas of harmony in the broadest sense of the term. Since antiquity, “harmony” has been a name for more than a theory of musical sounds; it has constituted a paradigm for the scientific understanding of the sensible world. Nature, through harmony, has been transcribed in the ideal elements of mathematics. But, time and again, the transcription has run up against one fundamental limit: something in nature resists being written down in a set of ideal units. A fifth hammer, obstinately, continues to sound.

In eight chapters, linked together like the tones of a single scale, The Fifth Hammer explores the sounds and echoes of that percussion, as they have made themselves felt on the most varied of attempts to understand the natural world. In vastly different and yet complementary ways, ancient thought and early modern science and philosophy, before and after Galileo, encountered a troubling dimension of nature, which they sought to interpret and resolve.

Confronting disproportion, they revealed their fundamental aims and limits. From music to metaphysics, from aesthetics to astronomy, and from Plato and Boethius to Kepler, Leibniz and Kant, The Fifth Hammer explores the ways in which orderings of the sensible world have continued to suggest a reality that neither notes nor letters can fully transcribe.

"Heller-Roazen brings remarkable gifts and skills to his inquiry. Formidably learned and versed in many languages, he has also steeped himself in the original texts and in the manifold and difficult interpretative directions that have struggled with this archetypal narrative. . . . I thoroughly admired Heller-Roazen’s thoughtful and beautiful writing in The Fifth Hammer."—Isis

"This tightly reasoned book rewards close study, and will be of interest to astronomers, mathematicians, and students of musical history."—The Sun News

“The Fifth Hammer is a dauntingly learned, conceptually demanding, exceedingly complex, and gripping book. Opening with a vivid account of Pythagoras’s discovery of harmony, Heller-Roazen burrows ever deeper into the haunting disturbance of the incommensurable, a disturbance that called forth some of the most remarkable efforts of mind in the history of the human race.”— Stephen Greenblatt, Harvard University