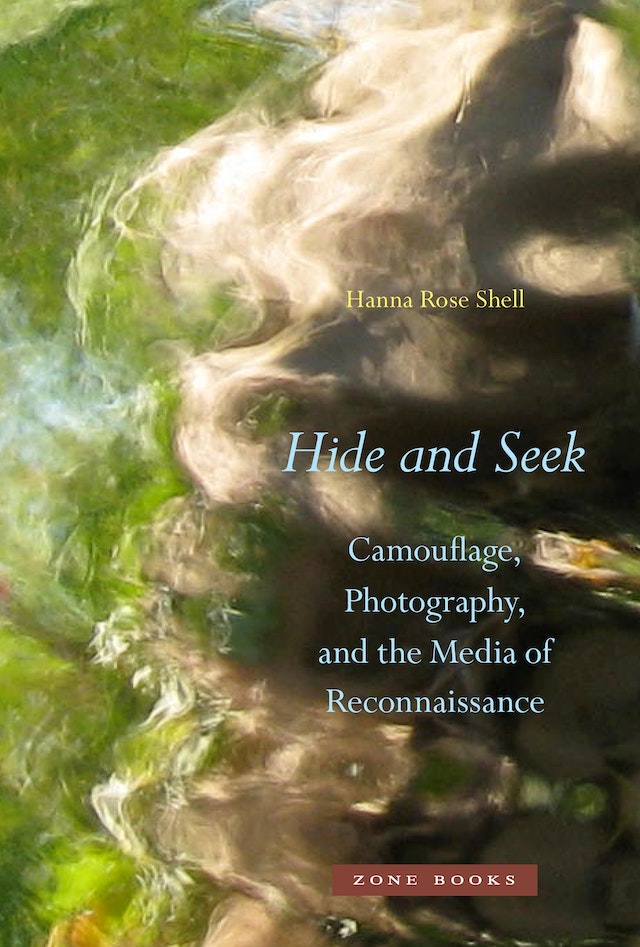 Camouflage is an adaptive logic of escape from photographic representation. In Hide and Seek, Hanna Rose Shell traces the evolution of camouflage as it developed in counterpoint to technological advances in photography, innovations in warfare, and as-yet-unsolved mysteries of natural history. Today camouflage is commonly thought of as a textile pattern of interlocking greens and browns. But in Hide and Seek it reveals itself as much more — a set of institutional structures, mixed-media art practices, and permutations of subjectivity, that emerged over the course of the twentieth century in environments increasingly mediated by photographic and cinematic intervention.

Through a series of fascinating case studies, Shell uncovers three conceptually linked species of photographic camouflage — the static, the serial, and the dynamic — and shows how each not only reflects the type of photographic reconnaissance it was meant to counter, but also contains aspects of the previously developed species. Hide and Seek develops its argument from the material forms camouflage has left behind — photomontages, paper blankets, stuffed rabbits, ghillie suits, and instructional films.

Beginning in the domains of natural history and figurative art in the late nineteenth-century, continuing through the rise of aerial warfare in World War I, and onto the cinematic techniques designed to train snipers and civilians during World War II, this book is both a history and a theory of the drive to hide in plain sight.

“Not content with interrogating the history of camouflage, the science of chromatophores, and the art of protective coloration, Shell explores their mutual intertwining in science and warfare in response to photography. Funny, poetic, and scary by turns, Hide and Seek asserts it is not human vision that camouflage seeks to trick, but the gaze of the camera. The skin of emulsions, no less than the hides of humans and beasts, is ground for trickery and revelation in this remarkable book.”— Caroline A. Jones, director of the History, Theory + Criticism section in the Department of Architecture at MIT and author of Eyesight Alone

“Hanna Rose Shell’s Hide and Seek stands apart from other recent writings on the significance of camouflage; at the same time, her book blends in seamlessly. While partly a book about military camouflage in relation to reconnaissance photography and film, it encompasses far, far more than that. Replete with surprising connections, it stands apart because of the author’s unerring research, engaging prose, and the thoughtfulness and originality of her conclusions.”— Roy B. Behrens, author of False Colors: Art, Design and Modern Camouflage and Camoupedia: A Compendium of Research on Art, Architecture and Camouflage