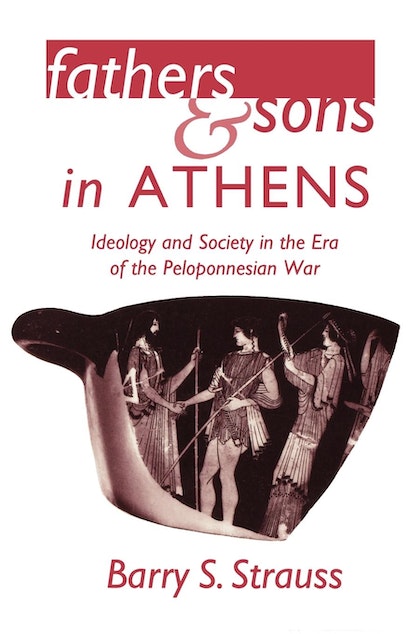 Father-son conflict was for the Athenians a topic of widespread interest that touched the core of both family and political life, particularly during times of social upheaval. In this vivid account of the intermingling of politics and the private sphere in classical Athens, Barry Strauss explores the tensions experienced by a society that cherished both youthful independence and paternal authority. He examines father-son relations within the Athenian family and the way these relations were represented in a wide variety of political and literary texts. His inquiry reveals that representations of patricide, father beating, and son murdering did not necessarily coincide with actual instances but rather served as metaphors for intergenerational tensions fueled by democracy, the sophists, and the Peloponnesian War.


Strauss points out that major Athenian accounts of father-son conflict — such as the myth of the Athenian national hero, Theseus, and the plays of Euripides and Aristophanes — were either produced or enthusiastically revived during the war. He traces the relation between the use of familial metaphors in these accounts and fluctuations in Athenian wartime ideology: as the fortunes of Athens shifted, citizens went from confidence in their elder statesman Pericles to enthusiasm over a new generation of young politicians led by Pericles’ ward Alcibiades, and back to an insistence on what Athenians called the “paternal” rule of older leaders. In emphasizing the blurring of boundaries between family and state, or private and public, in Athens, Strauss encourages us to reflect anew on the distinction between these concepts and on the difficulties of putting that distinction into practice today.

Barry S. Strauss is Director of the Peace Studies Program and Professor of History and Classics at Cornell University. He is author of Athens after the Peloponnesian War: Class, Faction, and Policy 403-386 B.C.

"This work is exciting and important not only for its thesis but for the new and often exhilarating way in which we see language and history and texts combined and interpreted."—Thomas M. Falkner, Bryn Mawr Classical Review

"Particularly noteworthy is Strauss's lucid demonstration of how the rhetoric of familial breakdown informed political discourse in the wake of the disastrous Athenian defeat in Sicily. . . . One of the most original and interesting works on classical Athens to appear in years."—Stanley M. Burstein, The Historian