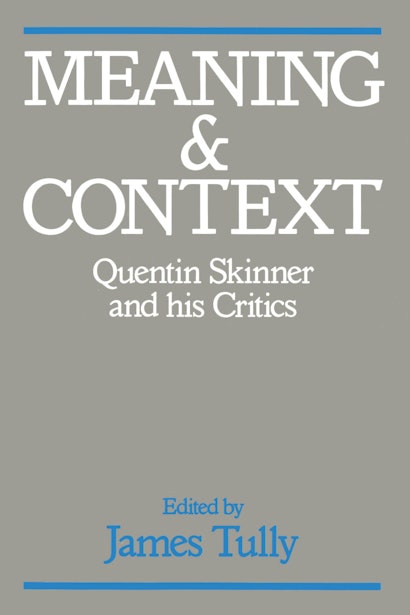 Quentin Skinner is one of the leading thinkers in the social sciences and humanities today. Since the publication of his first important articles some two decades ago, debate has continued to develop over his distinctive contributions to contemporary political philosophy, the history of political theory, the philosophy of social science, and the discussion of interpretation and hermeneutics across the humanities and social sciences. Nevertheless, his most valuable essays and the best critical articles concerning his work have been scattered in various journals and difficult to obtain. Meaning and Context includes five of the most widely discussed articles by Skinner, which present his approach to the study of political thought and the interpretation of texts. Following these are seven articles by his critics, five of these drawn from earlier publications and two, by John Keane and Charles Taylor, written especially for this volume. Finally, there appears a fifty-seven page reply by Skinner — a major new statement in which he defends and reformulates his method and lays out new lines of research. The editorial introduction provides a systematic overview of the evolution of Skinner’s work and of the main reactions to it.

"The work of Quentin Skinner has made a fundamental impact on the study of the history of ideas and political philosophy.... This volume gathers together the most important contributions to the debate both by Skinner and by his critics.... The questions addressed are of interest to those working in political philosophy, history, interpretation, and theories of meaning."—The Philosopher Index

"This confrontation between the foremost exponent of the "new history' of political thought and his critics will be of considerable interest not only to students of political theory but of legal and literary interpretation as well."—Terence Ball, University of Minnesota