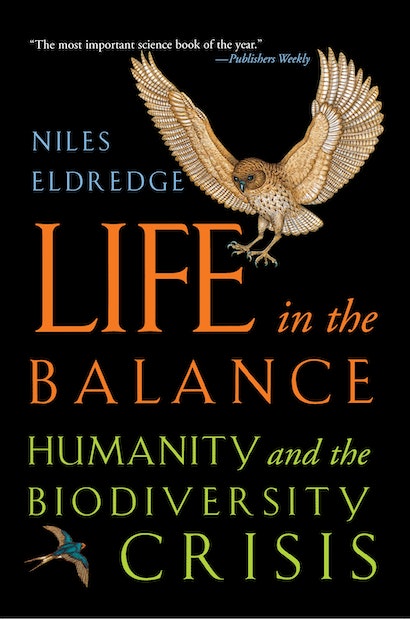 In Life in the Balance, Niles Eldredge argues that the Earth is confronting a disaster in the making — an ecological crisis that, if left unresolved, could ultimately lead to mass extinction on the scale of that which killed the dinosaurs sixty-five million years ago. Writing for general readers, he reviews compelling evidence for this “biodiversity crisis,” showing that species are dying out at an unnaturally rapid rate. He demonstrates the importance of maintaining biodiversity, taking the reader on a journey that reveals the twin faces of biodiversity — over thirteen million living species and the ecosystems through which these species transform the sun’s energy into life-sustaining matter. Throughout, Eldredge shows how our own fate is intricately linked with that of other species.


Eldredge, one of the world’s foremost paleontologists, begins by taking us to the heart of Botswana’s Okavango Delta, considered by many to be among the last “Edens” left on Earth — a place where a rich assortment of organisms exist in natural equilibrium. However, it is also a place where the results of human activity — pollution, clear-cutting, water-diversion, encroaching agriculture, disease — now pose the same ecological threats that, on a worldwide scale, put the entire planet at risk. Eldredge then leads us on a fascinating exploration of the Earth’s organisms — animals, plants, fungi, the microbes that underpin all life — and of the diverse ecosystems from the tundra to the tropics in which these organisms live. It is a journey that demonstrates the inherent value of the millions of species and ecosystems on Earth, and the importance of biodiversity to the entire biosphere and to humans’ continued existence.


Eldredge concludes that humans not only are responsible for the biodiversity crisis but also hold the key to preventing an impending Sixth Extinction. He argues that we must, among other strategies, pledge ourselves to sustainable development and the conservation of wild places. An eloquent and passionate account by one of today’s leading scientists, Life in the Balance will draw new attention to one of the most pressing problems now facing the world. In this book, Eldredge explores the same themes that illuminate The American Museum of Natural History’s new Hall of Biodiversity, for which he is Scientific Curator. The Hall is scheduled to open in spring 1998.

Niles Eldredge is Curator in the Department of Invertebrates at the American Museum of Natural History. He is the author of numerous books, including The Miner's Canary, Fossils, and Time Frames: The Evolution of Punctuated Equilibria (all Princeton).

"The most important science book of the year."—Publishers Weekly

"[Life in the Balance] is a natural history of the world seen through the eyes of a latter-day prophet.... The text is a delight, written as if the story in all its intricate detail has been bottled up and is bursting to get out."—David Bellamy, New Scientist

"[Niles Eldredge] is at his best telling his readers about the rich web of life that exists in the Okavango Delta in Botswana.... This remarkable area is one that he knows well and loves deeply."—Peter H. Raven, Scientific American

"A graceful and scholarly account. In particular, Eldredge's passionate description of one of the few 'Edens' left to us ... is a damning chronicle of what our world should be but is not."—The Times Literary Supplement

"The story of man's dominion over nature and his subsequent abuse of power cannot be told too often, and Eldredge...has provided one of the most succinct accounts yet."—Richard Fortey, The New York Times Book Review

"...a superb primer on why we should worry about biodiversity ... a clear, concise and beautifully illustrated tour of modern biology."—Susan Okie, The Washington Post Book World