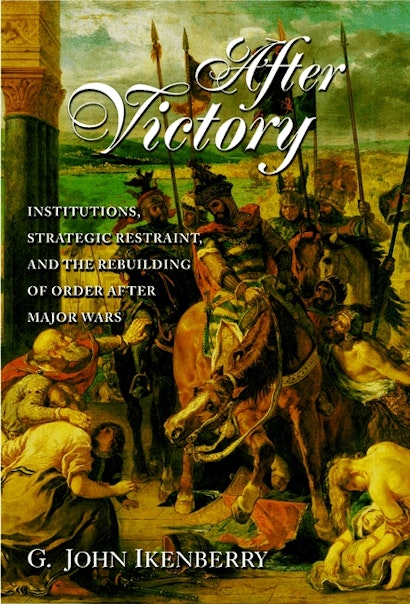 The end of the Cold War was a “big bang” reminiscent of earlier moments after major wars, such as the end of the Napoleonic Wars in 1815 and the end of the World Wars in 1919 and 1945. Here John Ikenberry asks the question, what do states that win wars do with their newfound power and how do they use it to build order? In examining the postwar settlements in modern history, he argues that powerful countries do seek to build stable and cooperative relations, but the type of order that emerges hinges on their ability to make commitments and restrain power.


The author explains that only with the spread of democracy in the twentieth century and the innovative use of international institutions — both linked to the emergence of the United States as a world power — has order been created that goes beyond balance of power politics to exhibit “constitutional” characteristics. The open character of the American polity and a web of multilateral institutions allow the United States to exercise strategic restraint and establish stable relations among the industrial democracies despite rapid shifts and extreme disparities in power.


Blending comparative politics with international relations, and history with theory, After Victory will be of interest to anyone concerned with the organization of world order, the role of institutions in world politics, and the lessons of past postwar settlements for today. It also speaks to today’s debate over the ability of the United States to lead in an era of unipolar power.

G. John Ikenberry is Professor of Government and International Affairs at Georgetown University and Non-Resident Senior Fellow at the Brookings Institution. He has published widely in the field of international relations and has, most recently, coedited American Democracy Promotion: Impulses, Strategies, and Impacts and The Emerging International Relations of the Asia Pacific Region (forthcoming). He is the author of Reasons of State: Oil Politics and the Capacities of American Government.

"After Victory show[s] how international governance can serve the interests of hegemonic powers."—Robert Wright, The New York Times

"This is a thought-provoking and elegantly written book and an important contribution to our understanding of postwar orders and institutions."—Peter Liberman, Political Science Quarterly

"After Victory is a majestic work that combines many familiar but seemingly unrelated themes into one elegant package of exceptional theoretical and empirical sweep. . . . It should have an enduring impact on the study and practice of international relations."—Randall L. Schweller, Journal of Politics

"This pathbreaking work is one of the most important studies on international order to appear in many years. It will be required reading for all students and scholars of international relations."—Choice

"The liberal argument that democratic regimes can make a dramatic difference in world affairs has finally achieved intellectual respectability, as this fine book so convincingly maintains."—Tony Smith, Foreign Affairs

"This is unquestionably one of the most important books in the field of the past decade."—International Affairs

"For the third time in this troubled century and following the end of the Cold War and the tragic events in the former Yugoslavia, the world is challenged to create a stable and enduring world order. In this pathbreaking book, Ikenberry draws upon novel theoretical insights and historical experience to determine what policies and strategies work best as the United States attempts to lead in the struggles to create a new world order. . A major contribution to IR theory and to thinking about international order."—Robert Gilpin, Princeton University

"Through careful, thorough, and subtle analysis of the diplomacy of the post-war settlements of 1815, 1919, 1945, and 1989—91, John Ikenberry addresses in After Victory three major questions for the study of world politics: how do major-state victors seek to translate their military success into a sustainable political order; why do secondary-state partners accept the order so constructed by the major victors; and why have post-war settlements become progressively based on institutional principles and practices? In its theoretical boldness, historical sweep, policy relevance, and sheer elegance of analysis and presentation, few books published in the past quarter-century in the field of international relations are the equal of After Victory."—Joseph Grieco, Duke University

"After Victory is an extremely important inquiry into the origins of postwar order in international relations—the key analytic and policy issue of our time. Ikenberry's book is unique in its theoretical and empirical sweep. In contrast to realists, for whom international orders are epiphenomenal and transient, and constructivists, who see order emerging from shared worldviews and norms, Ikenberry adopts a historical sociological framework. He argues that states self-consciously create institutions to bind themselves and others in international orders that reduce the 'returns to power'."—David A. Lake, University of California, San Diego

"After Victory argues that political primacy is achieved best through a strategy of limiting the unilateral exercise of power. This book engages contemporary political debates, and it illuminates these debates with an informative set of historical case studies. All serious students of international relations and all practitioners of foreign policy will want to come to terms with John Ikenberry's elegant and learned analysis."—Peter Katzenstein, Cornell University