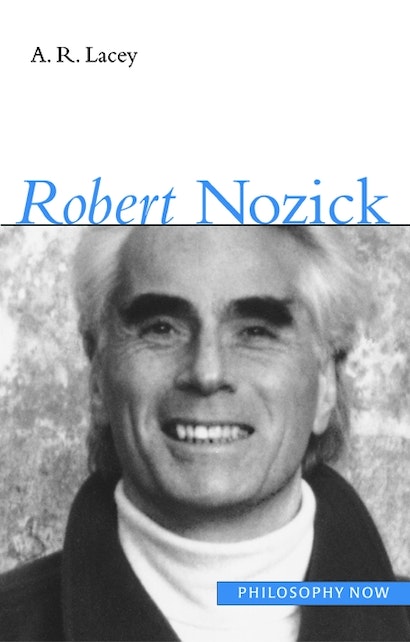 Although best known for the hugely influential Anarchy, State, and Utopia (1974), Robert Nozick has eschewed the label ”political philosopher,” as the vast majority of his writings have focused on other areas. Indeed, the breadth of Nozick’s work is perhaps greater than that of any other contemporary philosopher. A. R. Lacey presents the first book to give full and proper discussion of Nozick’s philosophy as a whole and of critical reactions to it, spanning areas as diverse as ethics, epistemology, and philosophy of religion.


The book begins by examining Anarchy, State, and Utopia and moves on to Nozick’s noted work on the theory of knowledge and his notion of ”tracking the truth.” Lacey explores the philosopher’s metaphysical writings, including his ”closest continuer theory” of personal identity, and his reflections on free will and the existence of God. He addresses the moral basis of Nozick’s political philosophy in depth. Later chapters discuss his ideas of ”symbolic utility,” his evolutionary account of rationality, and his varying treatments of Newcomb’s Paradox. The book concludes with more general topics, including Nozick’s thoughts on the meaning of life and what those who search for it are really looking for. Given Nozick’s reluctance to respond to his critics, the book’s discussion of the secondary literature on his work is invaluable. Throughout, Lacey finds themes that unite Nozick’s diverse writings, noting, for example, his hostility to coercion of all kinds. Illuminating, informative, and clearly written, the book will be welcomed as an authoritative guide to Nozick’s philosophical thinking.

A. R. Lacey was Senior Lecturer in Philosophy at King's College, London. He is the author of A Dictionary of Philosophy (third edition), Bergson, and Modern Philosophy: An Introduction and is the translator of Book Two of Philoponus's Commentary on Aristotle's Physics.

"[A] commendably concise overview of Nozick's philosophical writings. . . . [It] represents an attempt to summarize the main arguments advanced by Nozick throughout his philosophical career, while also discussing the major criticisms those arguments have received. Given the breadth of Nozick'' academic interests, this represents a formidable undertaking; Lacey, however, rises admirably to the task, moving smoothly and knowledgeably between topics as diverse a the moral basis of the state, the metaphysics of personal identity, and spiritual approaches to the meaning of life. This is a well-written book."—Jonathan Crowe, Policy

"This is a good book. It is clear and well written. I wanted to get an overview of Nozick's philosophy, and the author did not disappoint. I don't know of anything else in the field that does what this book does for those who want an introduction to, or overview of, the writings of Robert Nozick."—Scott Arnold, University of Alabama at Birmingham