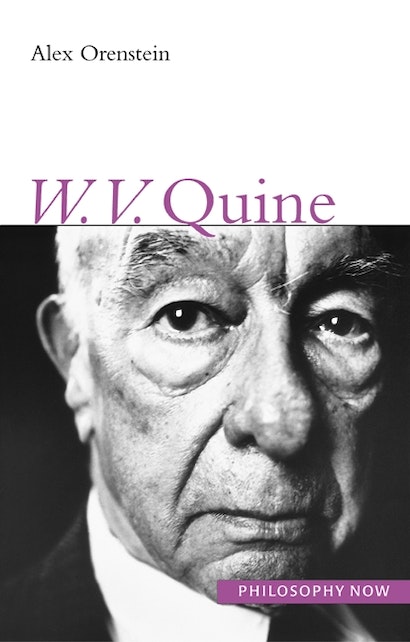 The most influential philosopher in the analytic tradition of his time, Willard Van Orman Quine (1908-2000) changed the way we think about language and its relation to the world. His rejection of the analytic/synthetic distinction, his scepticism about modal logic and essentialism, his celebrated theme of the indeterminacy of translation, and his advocacy of naturalism have challenged key assumptions of the prevailing orthodoxy and helped shape the development of much of recent philosophy.


This introduction to Quine’s philosophical ideas provides philosophers, students, and generalists with an authoritative analysis of Quine’s lasting contributions to philosophy. The major themes covered include the adaptation of the language of modern logic to formulate a criterion of ontological commitment; Quine’s own ontological commitments; Duhemian-Holistic empiricism and the attendant rejection of a priori knowledge; the nature and grounds of logical truth; Quine’s criticisms of such notions as meaning, synonymy, analyticity, and necessity; the conjecture of the indeterminacy of translation; modal logic; propositional attitudes; and Quine’s work on naturalized epistemology.


Quine’s ideas throughout are contrasted with more traditional views, as well as with contemporaries such as Frege, Russell, Carnap, Davidson, Field, Kripke, and Chomsky, enabling the reader to grasp a clear sense of the place of Quine’s views in twentieth-century philosophy and the important criticisms of them.

Alex Orenstein is Professor of Philosophy at Queens College and the Graduate Center, City University of New York. His most recent work is Knowledge, Language, and Logic: Questions for Quine (coedited with P. Kotatko).

"Orenstein's thorough knowledge both of Quine and of philosophical logic put him in an ideal position to explain and discuss Quine's seminal contributions. He does it with clarity and accuracy, and to his illuminating exposition he adds perceptive comment and incisive criticism. This is an outstanding account of Quine's thought, and will be invaluable to anyone seeking a really good, accessible and insightful introduction to it."—A. C. Grayling, Birkbeck College, University of London

"This presentation of Quine's philosophy is not only a good textbook but also a contribution to Quine scholarship. Written at a level suitable for philosophy majors and beginning graduate students as well as interested laymen, the book is well organized, precise, easy to follow, and includes good examples."—Dagfinn Føllesdal, Stanford University and Oslo University

"This is a useful and sympathetic introductory account of the main philosophical views of the late W.V.O. Quine. Its straightforward account of what Quine says and why he says it will be useful to students and others wishing to understand Quine's views."—Gilbert Harman, Princeton University